The sun was shining and hopes were high as we strolled down Elland Road for the latest test of nerves at the Theatre of Frustration. Struggling Southend shouldn't be a problem on paper........problem is football is played on grass and not paper. The Happy Chocker's brother joined our merry gang today and much of the pre match debate surrounded the inevitable Jermaine Beckford. Would he start? Would he play if he starts? What has gone wrong with our talisman sharp shooter? Nobody had any answers despite two well needed pints lubricating the discussion. One question was answered though as the Leeds No 9 appeared on the teamsheet. 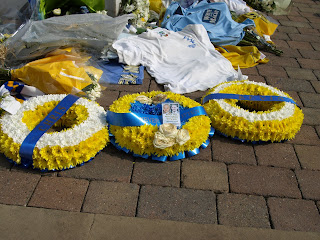 We all admired the tributes at Billy's statue to Kev Speight and Christopher Loftus. Very moving.
So with fingers crossed and seat belt securely fastened we kicked off. Against all logic it was the Shrimpers from Southend who started the better. This was a team who couldn't even fill their bench with fit players! The Leeds crowd were edgy but some of the nerves were settled when Snoddy rose majestically to meet a cross from Mad Max only for the goalie to tip the ball over for a corner. And when Beckford then headed wide from inside the 6 yard box chances were starting to flow. Leeds were spluttering rather than purring though against understandably mediocre opposition. As the game meandered to half time our new striker, capt Nayls, nearly grabbed the opener with a trademark header. This lifted the crowd but half time arrived with the score still 0.0.
The HT debate in the gents was of the cynical "seen it all before" type. If Mr Beckford was up for election he wouldn't have got any votes in that straw poll.
Nerves and fear were creeping into the crowd despite Leeds starting the better as they attacked the kop. A number of half chances fizzled out as the natives became restless in the stands. In the first half the south stand had taunted Beckford with a chorus of "you're not fit to wear the shirt" the same Beckford who "scored that F****** great goal at the scum shit hole" I can never understand abusing your own players like that. So I didn't cheer ironically with a good majority of the crowd as Beckford was quite rightly replaced by Becchio on the hour. As he sat in the dug out he acknowledged the fans singing his name.
Lord Larry has been under fire of late and this double substitution of Becchio and Johnson was crucial. He changed the system to leave 3 at the back, 4 in midfield & Snoddy tucking in behind a front 2 of Mad Max and Becchio. Mad Max, who by now looked like an Egyptian mummy with more bandages on than Kissy, was having another good game. Becchio sparked the game into life and the team immediately played at a much higher tempo buoyed by some robust work by the Argentinian. 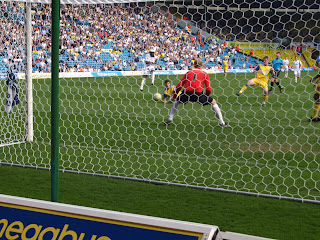 The switch worked within 2 minutes as Lucianno won a ball he had no right to and released Snoddy and when the ball found it's way to Mad Max he smashed the ball into the net to the massive relief of the Elland Road faithful. The goal inspired the home team and some of the previous spark disappeared for the Essex team as Leeds poured forward. Becchio was all over the pitch in stark contrast to Beckford winning balls, holding the ball up and inevitably falling over a couple of times. Whilst this still wasn't the irrepressible pre Xmas Leeds it was more encouraging.
Becchio got a richly deserved goal when he got himself on the end of an excellent cross from, who else, but Mad Max. Now I had wagered on Max to get the first goal and Leeds to win 3.0 so £ signs were beginning to spin before my eyes as Leeds pushed on for another goal. But it wasn't to be and I had to settle for a 2.0 win. With Charlton and Swindon losing it had been a good afternoon. We hadn't blinked, although at times in the first half there seemed to be some grit in our eye, and neither had our friends in Bermondsey. 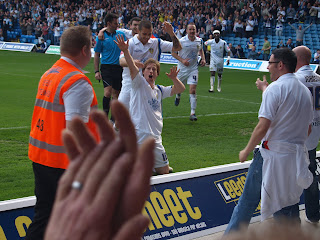 So it's still as tight as Capt Birdseye's wallet at the top but the Beckford debate goes on. He has certainly lost confidence and the knack of finding space and definitely lost his magic touch in front of goal. I doubt he will start at Carlisle on Tuesday but I wouldn't write him off for the season yet. 5 long games to go. We did just enough today no more. Against better teams we will need to move up at least one gear if we are to snatch the last automatic spot. Lots more turbulence ahead so keep the seat belt firmly fastened as we reach our final approach to the promotion runway. Carlisle away on Tuesday and another tense, nervous game in prospect.
Can't wait.
MOT
Posted by Andrew Butterwick at 18:04

Great blog. I've missed a few games so first time I've seen becks for a while. Just not interested. Doesn't seem to care. Shame but I think we've seen the best.

RPV
Thx for the comments. I think becks is very low on confidence. he will benefit from a few games out of the limelight. doubt he'll start at Carlisle.
MOT