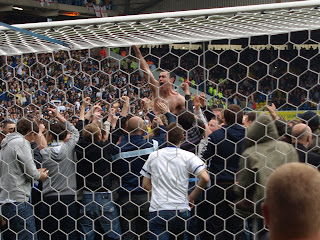 Hi Andrew
Thank God we made it. Have to say things have changed since I met you in Brighton Late November. Went over for the Millwall game in March only to experience it was rearranged to a Monday night. Thank you for a perfect combination of hunorous and interesting wiews concerning our club. Keep up the good blogwork in our temporary stop in the CCC. Can`t wait... for the fixture list. MOT!
Olav from Norway

Olav,
Great to hear from you. Hope you get chance to see some games live next season. Won't be long before your 7 Chelsea supporting mates will be asking you the way to Elland Road!
Prem here we come.
Regards
Andrew

We’re going up and that is certain

Out of this tinpot league after three long years of hurting

We did it in the end

We went to each and every shithole

And more, much more than this we did it Leeds way!

Great wins, we had a few

Especially the one at Man United

Simon planned each charted course, each careful step along the byway

And more, much more than this we did it Leeds way!

Yes, there were times I’m sure you knew

We started great then blew a fuse

But through it all, there was no doubt

We pulled together to fight it out

We faced it all and we stood tall and did it Leeds way!

We won, we lost, we drew

And we must say, not in a shy way

Now this is our club, what have we got?

Now chairman please put your hand in your pocket

The table shows we took the blows and did it Leeds way!


We did it Leeds way!

Hiya MOT. Leeds dont do easy, huh? So glad to see them go up at last.

Have enjoyed reading your blog every week, keep up the great work, mate.

By the way, I seem to recall you speculating that the season might go down to the last game and Becks gets the winner - funny old game innit?

Peter,
Thanks for the comments. It is a funny old game. i thought it was so fitting for Beckford to get the winner yesterday especially after all the stick he's taken from a minority of fans.
You never know there's an outside chance that he might still be with us next season.
Regards
MOT

Just wanted to say that this blog has been my first port of call after each match - really enjoyed following you on your travels from out here in Vienna (ex-Wakefield). Keep up the good work and see you next season IN THE CHAMPIONSHIP (does it ever feel good to be able to write that!)

Dominic
Thanks for your support for the blog. I will be posting fortnightly over the summer as we build up to the championship so keep an eye out.
Regards
MOT