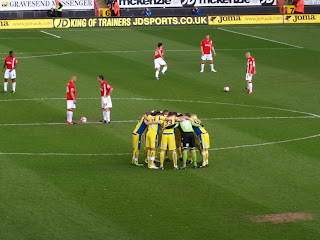 So after 45 league games, nearly 6000 miles on road and rail & a bank account that is around £3000 lighter the last game of another season following the mighty whites looms. A season that has seen unparallelled highs in the famous FA Cup run mixed with what in recent years have been all too familiar lows with home losses to the likes of Walsall & Millwall and on our travels at Exeter, Swindon & Gillingham. You don't need reminding that before Xmas we sat in what seemed like an unassailable position on top of the league and since the festive season we have tried our best to encourage our rivals back into the promotion race at every turn. In the last few weeks I thought we had blown it but thanks to a mixture of some gritty performances from Leeds and the reciprocal generosity of our rivals we are still in 2nd spot going into what will be a highly charged tension filled afternoon.
While we are taking on the Pirates from Bristol hope will spring eternal at The New Den, Boundary Park and even at St James Park where the super optimistic Udderstoon fans will be praying for a miracle. Meantime at the Theatre of Hope 39,000 fans will be going through agony willing the mighty whites to that all important win that will deliver the much coveted promotion back to the Championship. The big question is will Leeds thrive or freeze in the pressure cooker atmosphere? Will Bristol be up for the game or will they just be thinking of laying on a beach in some foreign clime? Will we leave it until the final minute to seal the win or will we have it sewn up by half time. These and a million other scenarios have played on the minds of thousands of Leeds fans from Selby to Switzerland, from Beeston to Buenos Aires and from Churwell to Cork as we've waited for the ultimate Last Chance Saloon game of a year of seemingly last Chance games.
So will we do it? My gut feeling is yes, but then you'd expect nothing less. Who will be the hero? Beckford, Mad Max, Lucciano or even Shane Higgs? Who knows but what I do know for sure is that at 3pm my heart will be in my mouth and my stomach will be doing more twists and turns than you see on the Pineapple Dance Studios. Seat belt fastened very tight for this one because this could go right down to the wire. Come on boys let's do it for the fans!
Can't wait for this one................C'mon Leeeeeeeeeeeeeeeeeeeeeeeds!
Posted by Andrew Butterwick at 18:50

Beyond words. This is for the future of the club, for our honour, for everything - and we've DONE IT!!

Keep it going for next season mate. Love your work