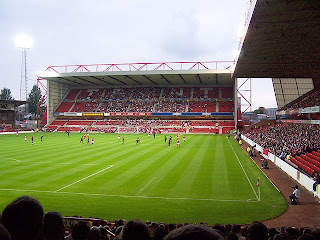 When this fixture was initially announced I was left with a moral dilemma.  Aug 14th was the day of Luke's wedding and as son of Mrs MOT's best friend our invitation had been sat staring at me from the mantelpiece for the last 18 months.  Devious thoughts of how I could logistically get from Pontefract to Nottingham and back to the reception while the photos were being taken without my better half noticing had invaded my thoughts.  In the days after the fixtures were announced I skillfully avoided answering any direct questions about my attendance either at the wedding or in the Bridgeford Lower stand on the fateful day.  Then just when I was starting to research a decent divorce lawyer just in case....................Sky announced they had moved the game to Sunday lunchtime!   For once I was pleased with the TV schedulers unlike the Happy Chocker who is committed to a golf tournament at the exact time we will be kicking off at the County Ground.

The game at Forest will be the second league altercation in a row that the ghosts Revie and Clough will have an unerring presence.  After defeat to Derby last week Sir Don's pride is in need of a timely boost against Nottingham's finest but we will start the game as underdogs against a team that came within a whisker of getting promoted last year and are unbeaten at home for almost a year.  The fact that they have lost their opening two games against Burnley and Bradford City offers a glimmer of hope but also the fear that we will get the backlash of the Red's stuttering start.  Looking at the squad Forest have at their disposal and their transfer budget in comparison to the one at ER fires a stark reality check across the bows of the good ship "SS Leeds Promotion"  If the loyal and very patient Leeds faithful needed any reminding of how thin our resources are the 4.0 victory against a poor Lincoln side in midweek gave us a timely reminder of the strength of our squad. Lord Larry played a 4:5:1 system not because of some fiendishly clever tactical move to bamboozle the web footed Imps................no it was because we only have one striker, Becchio, available and knowing that he will have to play the same system against Forest wanted to get some game time with the format. Even though we won comfortably against Lincoln there were still some frightening defensive errors that will not go unpunished if repeated at Forest.  We always knew the Championship was going to be a challenge and a step up in class but the early signs are that the thinness of our squad will be heavy cross to bear in the opening few games.  Of course I could rant on about why we haven't splashed the cash, strengthened the squad and why Capt Birdseye is the devil incarnate................but it will do no good. Lord Larry will carry on doing a fantastic job with the shoestring budget and for the time being that's all that matters. 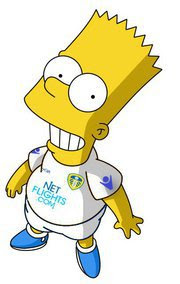 The extra cautious "prudence" that Capt Birdseye shows in running the club has got it's benefit though.  We appear to be on a sound financial footing unlike numerous other clubs suffering a similar fate to that we experienced when "Publicity Pete" was in the chair at ER.  What frustrates me is the fact that the Football League and the FA are clueless in trying to address the problem and create a reasonably level playing field.  Take the latest announcement of the increase in the "parachute" payments for clubs getting relegated from the Premier League.  I've never understood this?  Why give a club a subsidy to pay over inflated salaries to the same players who got the club relegated?  Why don't clubs have relegation clauses in their player contracts?  The whole situation is farcical.  Take the case of the Codheads at Hull.  They still owe transfer fees for five of the players they brought in to try and stave off relegation, including Jimmy Bullard at £5m a year, they owe the taxman £4m and they have debts coming out of their ears.  Their owner this week proudly announced plans for revised debt payments that will unlock the first £9m parachute payment that will in effect avoid administration for the time being at least.  As Geoff Boycott would say "It's just plain daft"

So we might be looking at a season where we are labeled underdogs more times than we like and we might have a collection of free transfers and unwanted strays pulling on the famous white shirts but the one thing that will not change is loyal and passionate support that Leeds generate.  Over 4000 white fanatics will be foregoing their roast beef and Yorkshire pud to pack into the away end and roar their team on tomorrow.  Some might ask why but there is a simple answer to that......We are Leeds United and they're worth it!
So my Sunday roast will be put on hold until Songs of Praise time.  Just hope I'm singing hallelujah in praise of  the mighty whites by the time I'm demolished Mrs MOT's Yorkshire's!
Can't wait.
MOT
Posted by Andrew Butterwick at 09:16