With the Happy Chocker away golfing I was on my lonesome as I gunned the car down the M1 for the re-arranged lunchtime fixture with Forest.  Somehow it didn't feel like a match day as Steve Wright's Sunday Love songs blasted out of the radio and the M1 traffic was thankfully light for the 90 minute trek.  Once parked up I found myself insider "Hooters" along with many other Whites fans, including Jonty (Noah and Nina's Dad) and the atmosphere began to build.  The big talking point was the Bruce v Naylor question.  It won't be a shock to learn that the consensus was that Bruce should start.  After the defeat to Derby most realistic Leeds fans were looking no further than a draw at best from the forthcoming contest.  It was reassuring to find that the home fans were also in pessimistic form after their dismal start to the season as we walked to the stadium. 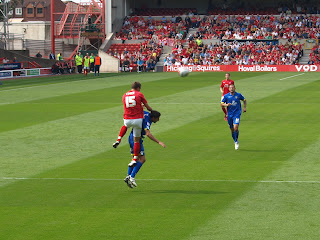 Lord Larry surprised most battle hardened fans by sticking with Naylor in the starting line up as the game got under way in front of the TV cameras and the 4000 plus raucous Leeds following packed into the Bridgeford end.  The first 20 minutes was carnage as Forest's one touch give and go strategy tore Leeds to shreds especially on our left flank.  Kasper laid another deposit in his "Cult Hero" account by denying a Forest attack in the first two minutes by spreading his massive frame to deny a certain goal. We simply had no answer to the crisp attacking from the Reds and it was no surprise when they took the lead on 10 minutes when Blackstock found enough space to turn a tank round in the Leeds area and gleefully guided Gunter's cross past Schmeichel.  Mr Collins was supposed to be marking him but he let him drift with dire consequences.  I began to fear for Leeds.  Others around me in the Leeds end put it in more graphic detail as Messrs Bessone, Collins, Johnson bore the brunt of the criticism and when Earnshaw hammered Schmeichel's post when it looked easier to score the writing appeared to be on the wall for Grayson's charges. 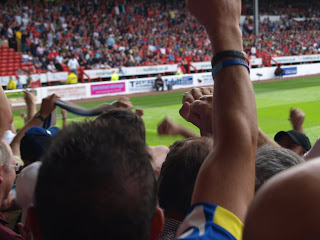 The woeful start didn't inhibit the Leeds fans as they enjoyed a mixture of urging their team on and taunting the Forest fans and a certain Mr Clough in particular. Gradually though Leeds began to inch their way back into the game and were actually creating half chances although Becchio's lone forages seemed to be getting us nowhere.  That all changed just before half time when the much maligned Bradders whipped in a vicious cross from the left for Sam to plant an unstoppable header into the corner of the net.  Get in you beauty! Cue celebrations and relief at the Leeds end.  Shortly afterwards the Leeds team trooped off to generous applause from their fanatical following something nobody could have foreseen after the opening salvos! 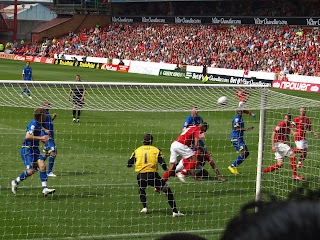 Lord Larry's reorganisation at half time seemed to work a dream with both the midfield and defence closing down their men a lot more effectively.  Bradders had an early chance to answer his critics as he swallowed up a lazy Forest pass and surged forward.......................prepared to shoot.................and then dragged his shot horribly wide. Mmmmm if you were a paid up member of the Bradley Johnson fan club you would not want to hear the descriptions of your hero or his family or lack of it that spewed from section of away fans I was stood in!  Despite this Leeds looked the more eager and chances began to flow.  Watt stayed on his feet and left two Forest defenders for dead only to see his cross mysteriously fail to be converted by.........yes you've guessed it Bradders!  Then Becchio rose like a swallow to meet a perfect cross only to head fresh air as the fans behind the goal were already celebrating a goal.....................Killa went close with a low driven drive and Sammy Watt had a goalbound shot blocked.  Confidence was beginning to seep into my pores replacing the fear that had blighted the opening game of the season and the first twenty minutes of this match.  At last we looked as if we can compete at this level. 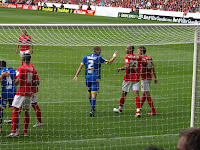 Forest did huff and puff at the other end but to no avail and it was the team from West Yorkshire who looked the most likely winners as we entered the last 10 minutes.  Watt and Gunter instigated a session of handbags at dawn after a clash in the corner where both were probably lucky to stay on the field.  This was followed by a lengthy stoppage for an injury to the Camp Forest goalie both incidents slowing some of the momentum Leeds  had built up.  Even with 6 minutes of added time Leeds couldn't squeeze a winner.  Adam Clayton appeared for a cameo performance giving the impression he was still suffering from the night before...........either that or he's just crap as he gave the ball away 3 times in as many touches resulting in three attacks!

The ref blew the whistle and I suspect both teams will be happy with the point.  This was a better performance after last weeks opener but I still have concerns about the tightness of our defence.  I know I'm beginning to sound like that miserable Scottish twat Hansen but at times our marking is unbelievably generous to say the least. Maybe the new guys just need to gel together a bit more or maybe we need a new left back and centre half?  The conversations on the walk back to the car reflected the game as both sets of supporters argued the case for claiming all three points.  In the end a point a piece was just about right.

Next up are our favourite South London team Millwall at home who are flying high at the top of the table.  Their belief that they have suddenly become our bogey team will add spice to an already high octane clash of two of last seasons promoted teams.  Another lunchtime kick off awaits us.
Can't wait.
MOT

Posted by Andrew Butterwick at 19:24