A mixture of showers and sunshine and a warm West Yorkshire Saturday afternoon greeted the swarm of Footy fans making their way to the Theatre of Hope for our latest clash with the Swans from Wales. My pre match optimism took a severe dent though as I met big Jon in the players car park.  He tried to ruin my afternoon by informing me that Kasper wasn't playing.  Worse than that he's likely to be out for a month with a foot injury and we've secured someone called Jason Brown from Blackburn on loan as cover.  After thanking big Jon for that stunning news I retired to the Capts Lounge to digest the breaking news.  The star of our opening salvos in the Championship was sidelined not just for today but also for at least this week's Yorkshire derbies.  By the time I met the Happy Chocker and the Quiet One, who was laid on the floor?, I had sunk into a mini depression.  A couple of pints later and a healthy debate on the very positive skills of a certain Mr Higgs I felt a touch better.  The rest of the teamsheet contained only one other surprise as Lloyd Sam found himself harshly sat on the bench with Watt and Mad Max starting.

The Swans started nervously as you would expect from a team that seems incapable of winning on the road in the league.  Leeds bossed the first 10 minutes and confidence started to ooze back into my pores as first Becchio and then Killa went close with decent chances that on other days could have ended up in the back of the net.  Just when I was thinking this was going to be a good day at the office for the mighty whites the Welsh side went in front.  A nothing long ball seemed to tie Naylor in knots as he completely mis-judged the ball and allowed Dobbie a free run on goal that he galdly took advantage of neatly placing the ball past a helpless Higgs. Bollox! 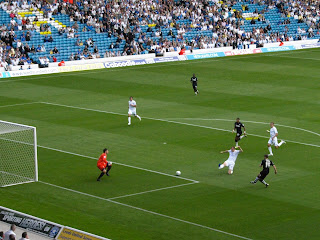 Conceding an early goal can affect a team in two ways.  It's either just the kick up the bum they need or it drains whatever confidence they started with and they become a rudderless ship floating in a sea of confusion.  Needless to say it had the latter affect on Leeds as the Swans knocked the ball about almost untouched by the men in white.  "1.0 to the sheepshaggers" sang the men from Harlech.  In truth it should have been more as Higgs was called into action with 3 excellent saves before half time.  The only glimmer of hope was provided by Bradders as he smashed the crossbar with a thundering shot on the stroke of half time.  The half time "gents" debate was not good.  The usual suspects for stick when things aren't going well, Naylor, Bessone, Johnson, got a good urinal pasting.  Back on the pitch "Steve from Garforth" brightened things up with 3 successful shots at goal earning him £250 smackeroos and the biggest cheer of the afternoon so far.  Inevitably "sign him up, sign him up, sign him up" wafted down  from the frustrated kop. 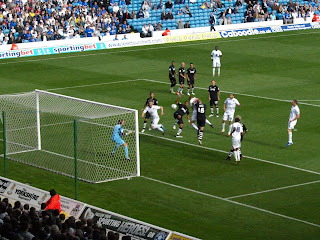 The second half started better.  What ever words of wisdom Lord Larry had used in his interval pep talk  began to take effect as Leeds played with a higher tempo and also a more robust purpose.  Leeds' pressure told after 50 minutes.  Mad Max was dragged down just outside the box.  He took the resulting free kick and picked out Naylor's thrusting head............the ball was blocked on the line and Bradders tried to break the net with his shot............1.1 and all was suddenly better inside the Theatre of Hope.  The previously quiet home crowd burst into life as they scented the faint smell of a Swan starting to roast!

10 minutes later that faint smell of roasting turned into a delicious aroma as Mad Max once again skinned his full back and hammered a shot goalwards......................what happened next was reminiscent of a game of shots in as the ball pinged around the box before Lucciano, who scores more than Berbatov, rifled in the second.....................Arrrrrrrrgh Becchio! The smell was now irresistible. 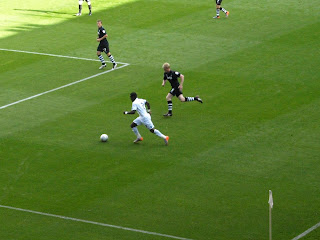 Becchio was at the centre of attention minutes later as he followed through on the Swan's goalie with his studs. The goalies reaction of throwing the ball in the Bisto Kid's face was both childish and should have earnt him a red card...............but it didn't.  Swansea tried to rescue the game with some sweet passing football but always gave the impression of never quite having enough brawn to mix with their brains.  McCormack and Somma entered the fray for cameo appearances and Sam had earlier replaced a disappointing Watt.  The final whistle signalled another win for the mighty whites..............a win that looked very unlikely at half time.  Lord Larry will know there is still a lot of work to do with the team, especially with regards keeping possession but their "never say die" fighting spirit played a large part in today's victory.  We will have sterner tests than the Swans gave us today this season but the league table looks good tonight with Leeds sat just 3 points behind the leaders.

Mad Max and Sam enhanced their reputations along with Collins and Higgs.  A week of Yorkshire derbies await with Leeds now the top team in Yorkshire for the first time in a long while.  Things are beginning to stir quite nicely in Lord Larry's kitchen.  In the end the Swan was well and truly roasted.  Who's for a leg?

Barnsley next on Tuesday night.  Nearly 7,000 Leeds fans travelling down the M1 for the clash with our South Yorkshire cousins.  Should be a cracking atmosphere.
Can't wait.
MOT

Posted by Andrew Butterwick at 19:32

Cheers MOT, sounds like another good win, hope the good form keeps up. Looking forward to the next installment. Look out Barnsley!