Merseyside misery, game moved again and all hail to the Chief!

Football can be a cruel game as any fan on Merseyside will confirm this week.  The red side of the city lurch from one disappointment to another whether it be a poor showing against Salford Yanks or an embarrassing exit from the League Cup at the hands of mighty Northampton.  If Roy Hodgson wasn't aware of the size of the task when he took over he certainly is now.  It must be no fun being an Evertonian though.  Imagine waiting an eternity for your sworn enemy to fall from grace and the chance to rub their noses in it only to find that their decline is bettered by your boys in blue?  This weeks exit from the cup at the hands of Brentford just the latest in a line of spluttering performances by the students of the "School of Science".  If this goes on they might consider renaming Goodison as the "School of Slapstick"  Mr Beckford's move across the M62 hasn't been a great success neither and already he's become the target of the less forgiving Evertonians...............some even calling him a lazy bastard!  Who'd have thought that? 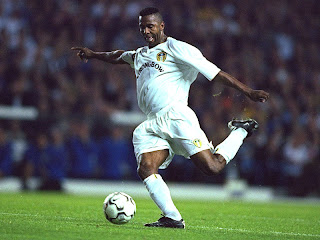 Back on Planet Leeds the game with Cardiff has had it's date and time changed not once but twice.  Firstly on the advice of the West Yorks Police the game moved to a lunchtime KO and then Sky snapped their fingers and the KO time jumped to 7.45pm on Monday night.  As ever this will play havoc with loyal fans travel plans from both sides not that the powers that be will have given 1 nanosecond of thought to that when taking the TV dollar.  Where there's losers there are always winners though and at least the many whites fans exiled in countries across the globe will get a chance to watch their favourites via the cathode ray.

Lucas, the Chief, will be at the Theatre of Hope on Saturday for the match with the Blunts. He is over here promoting his new book,  Lucas: From The Streets Of Soweto To Soccer Superstar , and as ever he will receive a fantastic reception from the Elland Road faithful.  Lucas is a true hero who's exploits on the football field for the 200 games he played for the mighty whites are well documented. http://en.wikipedia.org/wiki/Lucas_Radebe
My favourite memory of him is when he donned the goalie's jersey against Manure but all in all he was a true Gent and a credit to Leeds, South Africa and football in general.  His defensive class is a stark reminder of what we once had in LS11 especially when you look at the potential team sheet for Saturday.  Most fans will be pleased we've got hold of George McCartney as loan cover for the mistake prone Mr Bessone.  Mr McCartney is severely short of match practice but could still drop straight into the troublesome left back spot at the expense of Aidey White who filled in against Doncaster.  On the other side of the defence Connolly is injured and will be missing against the Blunts so the ever willing Hughes will be giving his usual all for the cause up and down the right flank. In the centre of defence Alex Bruce gave the fans much needed confidence after his robust performance against the Dons and hopefully he can cement his place in the centre of the back four with another storming performance.  With all due respect it's just not Lucas is it?

So a crowd of over 35,000 will pack the Theatre of Hope on Saturday afternoon.  You never know the Blunts might even sell all their tickets and add to another white hot atmosphere Yorkshire derby.  It will be no place for the faint hearted that's for sure.  I just hope the Chief still has his trademark big smile plastered across his genial face by the time Final Score starts. As ever
Can't wait!
MOT
Posted by Andrew Butterwick at 18:58