A delay to the Leeds bound train had the Leeds faithful on Selby station worried they might miss the kick off at the Theatre of Hope.  If only we'd known what a turgid, dour and frankly uninspiring game lay in wait for us maybe we wouldn't have been so worried.  Finally the train trundled into view and we were on our way.
The visit of the Blunts for the third Yorkshire derby on the bounce had swelled the crowd at LS11 to over 33,000.  Lord Larry raised a few eyebrows with his team selection as Killa dropped to the bench in favour of Bradders in the centre of midfield.  Clearly he wanted some steel to nullify the robust approach the Blunts like to deploy and Bradders was his man.  Davide Somma partnered Lucciano up front.  This was a game that most Leeds fans thought we could win including the Happy Chocker and yours truly and after a draw and loss in the last two clashes with teams from the Broad acres we were due a success. 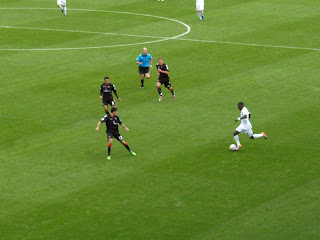 The atmosphere in the build up to the game was unusually subdued.  What we needed was some inspiration from the boys in white to fire up the crowd.  What we got was........well let's be blunt..........rubbish!  The opening salvos were fast, frantic and were similar to letting a few headless chickens loose on a Pin Ball table as the ball went for one side to another at an alarming rate.  Bradders was in mid field to break up any opposition thrusts which he did well but Howson's radar was way off beam with his first three passes all frustratingly wide of a white shirt.  Mad Max tried to spark his team mates and it was he who created the only real chance of the first half as Bradders released him with space on the left.  He toyed with the defenders before curling a lovely ball onto the advancing Johnson's head forcing a decent save from the away keeper.  Apart from some neat touches from the ever improving Somma that was it for the first half.


The Half Time "Gents debate" was not surprisingly very low key as fans reflected on a most disappointing first 45 minutes.  An indication of the quality of the game was the fact that the main topic of conversation was the quality of the Hollands Pies that are now served at ER.  They are definitely a class apart from the Pukka pie.

The second half continued as the first half did and it wasn't long before HC was suggesting that the game had 0.0 written all over it..............nobody disagreed.  Sheff Utd never really looked as if they had the way with all to score against a more resolute back four but on the other hand Leeds were creating absolutely nothing going forward and relied on a more direct style of play.  By the hour mark the crowd had been lulled into a state of total apathy by the lack of excitement on the pitch.  Then Lord Larry decided to make a change to try and spark the game into life.  Snoddy came on for Sam.  The Scotsman's undoubted class and pent up energy certainly changed the game as he was soon in the thick of action mixing his dribbling skills with some over enthusiastic tackling that earned him an early yellow card from the clueless man in charge.

McCormack and Killa were soon introduced to try and pinch a win for the never say die home team.  Then just when the headline writers were checking how to spell "dour stalemate" Leeds got the goal that they hardly deserved.  The Blunts left back made an horrendous attempt to clear the ball and ending up missing it completely leaving Snoddy acres of space to gallop away with the ball.  Two defenders  closed the talented Scot down but he jinked his way to the bye line, bit like Mick Jones did for the Cup final goal cross, before pulling back a perfect cross for Bradders to side foot gleefully into the net. A massive sigh of relief exploded from all 4 stands instigating a pitch invasion from the West Stand?  Had someone spiked their half time cups of tea? 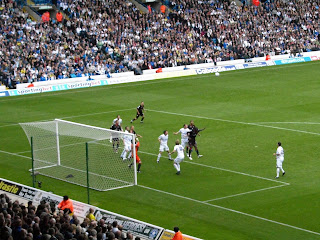 Still with 5 minutes to go the game managed to cram enough action into those few minutes to try and make up for the previous 85 minutes of torture as Snoddy saw red for a second yellow, followed by Jamie Ward for a nasty challenge on Killa and then helped by a plethera of free kicks in dangerous positions the Blunts desperately tried to snatch an equaliser.  Thankfully Leeds held on despite a last minute scramble in front of Higgs that so nearly ended up in the net.

This was not a classic.  Lord Larry did what he felt he had to do tactically to stop the Blunts playing but that left a dire shortage of creativity that was only rectified when Snoddy and Killa entered the fray.  Somma again showed some classy touches and McCartney slotted in well at left back.  On the evidence of his first 45 minutes he could well be the answer to the curse of the left back spot.  Collins and Bruce repelled the South Yorkshire attacks with confidence but this wasn't a match that will stay long in the memory.  Wonder what Lucas Radebe made of it all?

3 points is 3 points though and when I open the Sunday papers it will show Leeds sat nicely in 5th spot despite a horrible match.  There is a saying in football that a sign of a good team is that they win when they haven't played well.  On the evidence of today then we've got a bloody good team.  Onwards and upwards.

Preston on Tuesday and their alledged wife beater son of Fergie manager.  He should get a good old Yorkshire welcome?
Can't wait.
MOT
Posted by Andrew Butterwick at 21:48

Superbly written blog entry again! I was in the west stand corner right where the pitch invasion happened and I have never been surrounded by so many nutters! I was confused as well, there was fighting with the stewards and the police getting involved, it all kicked off just before the goal went in. Was a really bad game but happy to grab the 3 points and run. I thought Hughes had a good game and the two centre halves were really solid. Snoddy made a big impact when he came on. MOT

Thanks for the comments. defence is looking a bit more solid. Hope it continues tonight
MOT