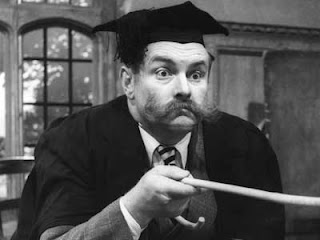 So a month into the season and we have a blank weekend due to the international break.  With students and teachers around the country reluctantly returning to school after their summer break I began to wonder what an old fashioned school report on the mighty white's progress in the first month of the championship might look like?

The Team:
"At times this student has performed exceptionally well.  His essay on how to destroy a South London gangster through the use of flowing, attacking football was outstanding and well worth the A*. I particularly liked the explosive ending with the introduction of the mysterious South African hero who won the day.
It has not been all plain sailing though.  There have been times when his attention has wandered and he appears to be day dreaming.  This can be very frustrating when I know he can do better.  Classic examples of this were the disastrous opening RAMshackle musical concert  and then in the first part of the school field trip to Nottingham. When we got to the Forest I did wonder if he'd stayed up too late the night before or forgotten to have has breakfast as his concentration level was non existent until I gave him a glass of Red Bull.  After that he did recover and showed some excellent skills and knowledge in researching how debilitating alcoholism can be to a well known, big mouthed cult hero.


His performance in the cup competitions has been mixed.  His mathematics prowess in the tussle with the Lincoln Imps was encouraging showing that he had no trouble dealing with numbers up to 4 but in the following lesson on nature and wildlife his grasp and understanding of the key issues on Fox hunting were sadly lacking after a promising start.  That brings me to his latest project on the life cycle of a Hornet.  He seemed to get mixed up at first by referring to the subject matter as the "Golden Boys"  After a short spell in detention for perceived homophobic references, he came through with a good mark on the subject even though his essay was quite dull and uninspiring it did address all the relevant points and satisfied his large audience.


In summary I am expecting this student to over achieve this term as long as he improves his concentration and application.  Do remind him though that when he is on field trips not all of the locals enjoy his loud renditions of his favourite songs."


Head Boy:
Kasper Schmeichel.  Kasper is new to the school this term.  He has settled in very well and made an immediate impression on his classmates and teachers with his boundless energy, agility and cool confidence.  Definitely one for the future.


Detention centre.
Fede Bessone, Bradley Johnson have spent the most time stood in the corner of the class for a combination of being careless with possession of the class football and attempting outrageous shots that never look as if they will go anywhere near the goal.  Extra tuition after school could improve their situation but it is unlikely they will achieve their required exam grades unless significant improvement is seen.


Parents view of the Headmaster.
The PTA continues to be the best supported in the country and believes that the Head, Master Grayson, is doing a sterling job with limited resources.  The encouraging Ofsted report from last year suggested that with prudent investment in some of the "tired" parts of the school building that there would be a possibility of the school progressing to the Premier League.
There remains serious concerns within the PTA that the Chair of Governors, Mr Birdseye, doesn't have the best interests of the school at heart.  His policy on the cost of tickets for school functions continues to test the pockets of most parents.


Final summary:
This student tries hard to please most of the time but must improve concentration levels and continue to work on improving skills and his defensive manoeuvres if he is to realise the high expectations of his parents this term.

Back to normal next week with the visit of the Swans,
Can't wait.
MOT
Posted by Andrew Butterwick at 09:47

A+ for a good report, MOT. Hope the cooking teacher a good recipe for Roast Swan for the boys.

Your report reminds me of my own school reports, "Could do better", "Needs to concentrate more". All I wanted to do was go and play footie!

Got your tickets for the Sawnsea game? Looking forward to your next effort.

Ozzie,
The Roast Swan is on low heat in the oven and should be just about ready by 5pm Saturday!
Don't need tickets for the home games as I'm a season ticket holder.
Thanks for your comments.
MOT

>Back to normal next week with the visit of the Swans

Coming over for the game from Vienna. Let's hope the lads put on a show for me (although at the end of the day, I'll take a flukey 1-0 if that's all that's on offer!)

Cheers as usual for the match reports. As I said last season, this is my first port of call after the games

Dominic,
Hope you enjoy your trip and we get at least the flukey 1.0. Thanks for the feedback and keep spreading the word.
MOT