As we go to press it has become clear that after two weeks of intense discussion Gazza has quit Leeds club, Garforth Town, before he actually started.  This news will shock the football world who had hoped that the lovable Geordie had finally found a position back in football at the publicity hungry Evo Stik League club.  Unfortunately the club's owner Simon Clifford just didn't have enough on offer to make the deal stick.  It is rumoured however that the reason Mr Gascoigne turned down the offer is the imminent launch of his new business, KFC, Kanny Fisherman's Counselling.  Despite the failure of his first project with Mr Raul Moat Paul has been studying hard to perfect his technique and is now ready to take on the world.  Go for it bonny lad! 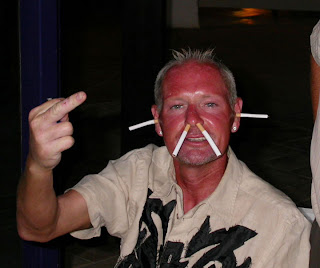 While we're on the subject of manager's quitting I am amazed to see numerous calls for the head of Lord Larry after recent defeats.  Last season he led us to promotion from the wilderness of League 1 back to the championship where we currently sit comfortably in the middle of a very competitive table. 5 ex Premier clubs are still floundering in the third tier of league football and have all this week experienced the wonderful atmosphere of the first round of the Paint Pot Trophy.  Yes we've had two shocking performances already this term but for god's sake....................have his critics never had a bad week at work and made wrong decisions? An old sage once said "the only person never to make a mistake was crucified on a cross at Calvary"  So let's have a bit of patience.  There will be lot's of ups and downs this season as usual and given the quality of the opposition we've seen up to now it's quite possible we will be in the mix for the play off places come next May.  Just fasten your seat belts and hang on in there.

I couldn't not mention the soap opera "Kopside" which has shot up in the TV ratings in recent weeks.  If you've not seen it let me give you a bit of background.  It is set in the Anfield area of Liverpool where two Americans (the baddies) have arrived and seem hell bent on destroying the local football club. The local scallywags are understandably a tad upset and their star player Stevie G wears a permanent frown on his worried face.  The new manager, Reasonable Roy, thought he'd got his dream job but is now bewildered by the lack of talent on the field and the onerous amounts of off field bickering.  Last week's episode finished with him arriving home after another defeat and shouting at his wife, Pat "what's going on?" (he used to be in Eastenders).  In this week's episode some new Americans arrived to try and buy the club, the baddie Americans sack the board and the club teeters towards administration...............delicious! It's like Dynasty/Dallas/Brooky and Eastenders all rolled into one!

No match for us this weekend due to the international break.  At least it will give a bit more time for the long injured list to recede before the trip to Boro.  Speaking of sacking managers Mr Strachan is another manager with the sword of Damoclse hanging over him.  Let's hope we can ease it on it's way next Saturday evening?
Can't wait.
MOT
Posted by Andrew Butterwick at 09:08

Kopside sounds like a great idea for a soap opera, i would watch it, it would be a million times better than Corrie! Do you think there would be a place for good old Frank Butcher too?

Yes Frank would be a good addition. The ghost of Shanks maybe? Lol