A bright day greeted yours truly, The Happy Chocker and The Quiet One as I gunned the new Scirocco southwards down the A1.  After the humiliation of Tuesday's 10 goal pantomime it's fair to say that even this eternally optimistic Leeds fan was more than a wee bit apprehensive about this trip to Suffolk for the clash with the Tractor boys.  As we gobbled up the miles we pondered the dilemma Lord Larry had in selecting today's team.  Does he go all negative and try and stiffen up the defence with a 5 man midfield?  Does he stick to the open style of play and hope we score more goals than them?  Does he drop Higgs?  Does he play Faye?  By the time we'd got to Cambridge services I'd come to the conclusion that he was left with Hobson's choice.  After all by my reckoning we must have the busiest treatment room in the championship with 7 first team players currently squeezing in there instead of the training ground on a daily basis. 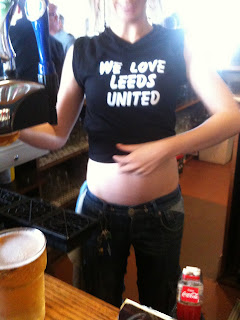 Spirits were lifted as we arrived in Ipswich and joined the faithful whites fans in the Station Hotel.  The bar maids were dressed for the occasion resplendent in their "We love Leeds Utd" T shirts.  With the help of a pair of beer goggles the Happy Chocker was starting to harbour thoughts of romance until I dragged him away to the more important part of the afternoon.............the game!

Lord Larry's choice was to move Bruce to right back and bring back Naylor to the centre of the defence.  Faye, Howson, Killa and Johnson filled the midfield with Snoddy partnering Somma up front.  Becchio dropped to the bench, presumably slightly miffed that after the defence lets 6 in he gets dropped?

The first 10 minutes of the game were scrappy as two teams who had experienced the bitter taste of defeat the last time out jousted for early superiority. Snoddy seemed to have a roving role with Somma leading the line.  Just as I was beginning to feel pleased with a relatively solid start we went one behind. Jason Scotland danced around non existent tackles to tap the ball into the gaping net. 1.0 Ipswich. The previously funeral like home crowd burst into life and a number of Leeds fans sat in the Ipswich end were ejected after showing their colours.  The now grey skies reflected my mood.

In an evenly balanced contest Leeds's only real threat on the home goal was a long range shot from Howson that sailed over the bar and a tame effort from Killa that the goalie easily dealt with.  Somma showed some good touches when the ball was played into his feet but too many times the ball went over his head to be snaffled up by the grateful home defence.  In midfield Faye was mixing good passes with obvious lack of match practice as he was caught in possession more than once in the first 45 minutes.  The half closed with the large away following reminding the team of our days in Europe..............they seem a long, long time ago.

During half time the Happy Chocker observed that Ipswich weren't that outstanding and with a bit of composure we might still get something out of this game.  I had to agree.  Composure was the key.  The game plan was sort of working with the midfield looking slightly stronger than of late bit the back four again looked lacking in leadership and at times hesitant.  Bruce was trying manfully to contain the tricky Townsend on the wing as Ipswich targeted the centre back playing out of position. 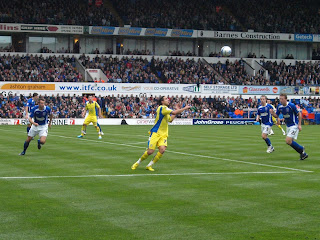 Leeds started the 2nd half with a bit more fire and started to look as if they might just grind a result out.  Problem was that when Ipswich attacked we looked far too vulnerable for my liking.  After another session of  "after you Claude" defending Scotland thankfully blazed a shot into row Z from 6 yards out.  He really should have scored.  If he had Leeds would have been dead and buried at 2.0.  At the other end we were huffing and puffing to no avail.  Bradders lifted a dangerous free kick over the bar.  Nobody was surprised by that in the away end.  Frustration was getting the better of me as the game cried out for a drop of inspiration to replace the plentiful perspiration.

Just after 60 minutes Higgs pulled up with what looked like a hamstring injury and the flying pig that is Jason Brown replaced him between the sticks.  He was soon endearing himself to his new fans with a decent diving save to prevent Scotland from adding to his tally.  With 15 minutes left Watt and Becchio came on for Killa and Bradders as Larry went for broke.  And it worked!  We were soon dancing in the aisles as persistent work by Sanchez Watt fired the ball back across the goal for Snoddy to gleefully smash the ball home. 1.1.
Maybe just maybe this might be our day?  Errrr no.

No sooner had the Leeds crowd finished a chorus of "you're not singing any more" than Leeds were reduced to 10 men.  Bruce chased the flying Townsend right in front of our pitch side seat and made what appeared to me to be a well timed tackle as he took the ball and then the unfortunate Ipswich winger.  The referee reached straight for his card and dismissed the make shift right back for his second yellow.  Now I don't often lose it at a match but today was an exception.  The smirking supercilious ref was just yards away from me dismissing both Bruce and Snoddy's protestations with disdain.  I took the opportunity to remind him of how bad a game he'd had and that he deserved a damn good thrashing...... or words to that effect!  So if you see a fan in a retro white shirt going purple as he hurls dogs abuse at the ref on the Football League show tonight......that's me. I confess.

The Leeds crowd were now fired up to say the least and with just 10 minutes left we could still get something out of the game............if we could keep the home team at bay.  But we didn't.  We let another ball come into the box unchallenged and lo and behold an Ipswich head popped it home. Double Bollox!
Even though Leeds tried for a 2nd equaliser it was a forlorn hope and eventually went down to a 2nd successive defeat.

This league is very even and in some ways there for the taking by any team that can find that wonderful ingredient, consistency.  Leeds are far from that at this moment in time.  Their defence remains a major concern.  Kisnorbo is badly missed and after finding a reasonable stop gap at left back we are now struggling at right back.  At the start of the season I thought 15 points from the first 10 games would be a decent harvest so reaching 14 points at that stage is no mean feat.  Lot's of time left in the season to re-group and climb steadily up the table............but only if we repair the leaky defence.

205 miles driving home had a calming affect on me so as I walked through the door and Mrs MOT asked if I was sulking I could honestly answer no..............good job she didn't ask two hours earlier though.
Next game is two weeks away due to the international break.  Hopefully we can reduce the injured list and get the likes of Schmeichel, McCormack and even Connolly fit again before the trip to Boro.  Plenty of defensive practice at Thorp Arch in the meantime I hope.  Sort that out and we will creep up the league.

Posted by Andrew Butterwick at 23:43