God's got his Leeds shirt on, World Cup thoughts and taxi for Robbo! 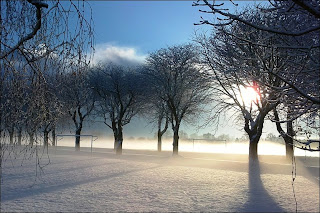 As God decided he was going to wear his favourite Leeds shirt all week the country descended into a snowy grid lock...............pretty gridlock...............but still gridlock.  With the benefit of the under-soil heating at the Theatre of Hope the pitch should be OK for our clash with Crystal Palace on Saturday but whether the snow will relent enough to allow the surrounding paths and car parks etc to be cleared to the satisfaction of the Health & Safety police is another matter. Hopefully the Leeds staff will win their battle with the elements and the game goes ahead offering us a potential opportunity to gain a march on our rivals in the play off bun fight. One question I can't get my head round this week is if this is the worst November snow we've had since time began............what happened to all the global warming  that's supposed to be encouraging Palm Trees to grow on the North York moors? 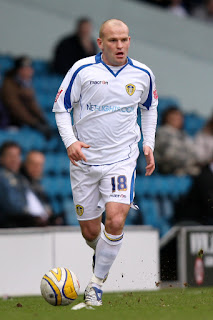 News that fans favourite Andy "Pieman" Robinson has had his contract cancelled this week brings to an end the scouser's eventful stay at Leeds.  He joined Leeds just as his erstwhile employers gained promotion to the Championship and Leeds were battling in the lottery of the play off's.  A strange decision which clearly had more to do with the size of his new pay cheque than any pure footballing ambition. I along with the vast majority of other Leeds fans were pleased to see Robbo in the white shirt of Leeds as he had single-handedly destroyed Leeds at the Liberty Stadium earlier in the season.  Maybe Swansea were more astute though as they purred through the Championship the following season without one of their starmen from the promotion campaign whilst Robbo spluttered and stuttered to establish himself in the Leeds set up.  His twinkle toes dribbles entertained the fans in the same measure that his inept defensive qualities frustrated his managers and once Lord Larry took the reins at Elland Road Mr Robinson's days were numbered.  So why has it taken so long for Robbo to move on?  The answer is the size of his salary. He was rumoured to be on the top salary at Leeds last year so he appeared to be happy just to play in the reserves and take his money until the end of his long contract.  So is the fact that Leeds have now struck a deal to get him off the books a sign that they are clearing the decks ready for an infusion of new blood in the January window to bolster our promotion campaign? Time will tell. 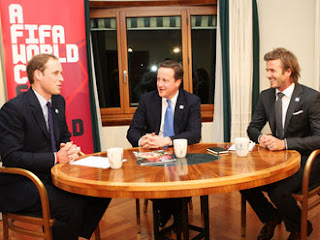 I can't say I was shocked to hear that our much vaunted bid to stage the 2018 World Cup had been bettered by Russia.  To bring the World Cup to the UK would have been fantastic and to have Elland Road as one the  host grounds was just a dream.  But in the and that's all it was................. a dream.  The problem is we're just too English.  Where the archaic leadership at the FA thought it was a good idea to roll out a Prince, a PM and a media friendly ex England footballer to impress the FIFA delegates the Russians had persuaded some dodgy Oligarch to concentrate his considerable spending prowess in the direction of anybody with the words "FIFA delegate" on their CV in the run up to the vote.  Now which would you choose a 5 minute chat with Prince William or a Sunseeker Yacht crewed by nubile Russian dolls at your disposal? And don't get me going on why the alcohol and meat pie free country of Qatar got the 2022 World Cup!

So back to proper football and a freezing cold afternoon in West Yorkshire watching the mighty whites trounce the Eagles from South London.  I can already feel a warm glow of anticipation. Bring it on.
Can't wait.
MOT
Posted by Andrew Butterwick at 18:45

Leeds is a big name for sportsman. We airport taxi detroit always work for the betterment of our customers.