The arctic weather had relented slightly to allow the Leeds groundstaff to clear the pitch and make the famous old stadium ready for our clash with a struggling Crystal Palace side.  So the Happy Chocker, Quiet One and yours truly found ourselves treading gingerly through the snow and ice on Elland Road for our pre match drinks in the newly refurbished members bar.  The Theatre of Hope might not be good enough for a FIFA World Cup but after a testing week at work it brought a warm glow of anticipation to this fan even in the unusually harsh wintry conditions. That's something that a certain Sepp Blatter just wouldn't understand!

Confidence was in the air in the Centenary Pavilion.  Our visitors, Crystal Palace, are in the relegation zone for a reason and Leeds were looking to stretch their unbeaten run to a commendable 7 games.  Even the fact that Paul Connolly, once a target of the Leeds doom & gloomers, was suspended and Andy Hughes was filling in at right back didn't dampen the positive vibes circulating amongst the Leeds faithful.  With the transfer window re-opening at the end of the month there were plenty of "in the know" comments floating about.  "Kilkenny is definitely going to Derby in January" a knowing Sage declared behind me.  I turned round eagerly to ask Lord Larry why he wasn't giving the team talk only to find the font of this knowledge wasn't Mr Grayson but one of the 25,000 regular managers that populate Elland Road.  A minute later Becchio was on his way to Forest................this was all too much for me and I decided it was time to take my seat.

The lush green turf of Elland Road was a strange sight after a week of snow.  I just hoped that the Leeds team would reward the efforts of the groundsmen with a stylish performance. From the kick off Killa launched the now familiar diagonal high ball straight into touch.  Not something to fire the fans up to an early frenzy!
Leeds were playing in their now favoured 4.2.3.1 formation and soon had the ball in the net. A ball from Mad Max found Howson free beyond the Palace defence and he coolly fired the ball past Speroni in the Palace goal but my eye had already wandered to the fateful Yellow flag waving for offside.  Still that warmed the crowd up as both sides showed their intent to play a more expansive game.  Leeds were definitely on the front foot though as Bradders wasted a good chance when he drove a free kick into the wall before a flying volley from Snoddy was painfully blocked by an Eagles defender.  Palace were playing a high defensive line which cried out for attacks down the flanks which both Snoddy and Max suitably obliged.  Snoddy was having another 5 star game as he bamboozled the poor full back time and again.  He also bamboozled the referee as he booked him for scoring an offside goal? Bizarre. 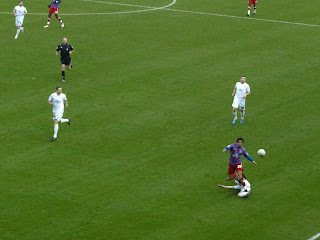 Palace were creating chances on the counter though and Kasper had to be at his best to divert a shot with his leg as the Eagles swooped down the Leeds left flank left exposed by a mis placed Bradders pass.  Capt Birdseye had slated Johnson in his programme notes for his unreasonable wage demands.  He was having the type of game that suggested he should be halving his current wage not doubling it!  Back at the other end headers from Becchio and O'Brien flirted with the Palace goal then Snoddy had the crowd out of their seats as he ghosted past Mr "I haven't a clue how to stop him" full back before squaring a ball straight to Becchio who was lurking with intent in the six yard box.  How the ball didn't go in is beyond me but it didn't and rolled back to the edge of the box where Mad Max hit a thundering shot inches wide.  Mmmm "we could do with a goal" I muttered to HC.  Sure enough we soon got one as yet another counter attack sliced the Leeds left side open leaving the impressive Neil Danns a simple tap in to put the away side into an unlikely lead. Worse was to follow as Kasper had to be at his best to tip a stinging free kick over the bar just before half time.

So Leeds were 1.0 down at HT after an open and entertaining first 45 minutes in which it could easily have been 3.2 to Leeds.  Funny old game isn't it?

After a fruitless 10 minutes of the 2nd period Lord Larry made his first changes.  Sam and McCormack came on for Max and Bradders as Leeds went to 4.4.2 in an attempt to get back in the game.  The booing of Johnson as he went off was vicious.  I don't agree with booing our own players off the field no matter how bad a game they've had.  And Bradley had had a very bad game!  The changes sparked extra life into Leeds as they poured forward looking for the equaliser.  McCormack soon had the ball in the net after an intelligent run beyond the creaking away defence but for the third time in the game the fluttering Yellow offside flag denied Leeds.  Maybe this wasn't our day?  Snoddy was surging down the right flank and Sam matching him on the left.  Speroni was performing miracles in the Palace goal as still Leeds couldn't find the key to unlock the resolute Eagles defence.

Lord Larry has never been afraid to make bold decisions when using his resources sat on the bench and today was no exception.  Billy Paynter was stripped and ready to go with just 10 minutes left.  But who was coming off?  Lucciano clearly felt it was him as he trudged towards the touchline.............but wait a minute Hughesey was sprinting off aswell.  Lord Larry was going 3.4.3 with the third different formation of the afternoon in a desperate attempt to wrench the points from the South Londoners.  The atmosphere in the stadium lifted a notch.  Safety belts fastened we're going in! 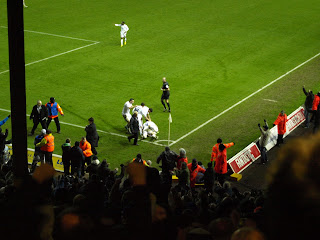 What happened next sums up beautifully what watching Leeds United is all about.  Firstly Becchio sent the home fans into ecstasy as he stabbed home a loose ball after Paynter had retrieved a corner with his head.  Get in! 1.1.  And before the kop had belted out a second chorus of "cost less than Berbatov" we were in the lead.  Leeds broke quickly with Howson and Killa winning the ball in midfield releasing Snoddy then suddenly McCormack is bearing down on goal only to be dragged down by a Palace arm..............the ball runs to Mr Becchio who slots the ball past the desperate Speroni for the winning goooooooooooooooooal! Get in you absolute beauty!  Pandemonium in the stands and wild celebrations on the pitch.  In 2 minutes we had gone from "at least let's pinch a draw" to "Leeds are going up, going up" Delicious!

But the match was far from over.  Palace weren't going to lie down and die as they went in search of what they thought would be a deserved point.  I've got to say there were some hairy moments as the ball pinged about around the Leeds box.  But Palace left themselves exposed at the back and as the game drew to a close it was Billy Paynter who nearly notched a third for Leeds as he out paced the flagging Eagles back line and hit a sweet drive that Speroni tipped expertly round the post.  The final whistle brought to an end an exciting game which again showed Leeds' never say die spirit.  Snoddy was man of the match despite Becchio's efforts closely followed by Speroni in the Palace goal.  McCormack looked mightily impressive in the short time he was on the field and he will leave Lord Larry with a difficult selection problem ahead of the Burnley game.  It was a sad day for Bradley Johnson though.  He had an awful game coupled with the "hair dryer" treatment he received in the programme from his chairman I somehow don't think he will be smiling tonight.  Never mind it will give him time to reflect on his decision to ask for double his wages without too much evidence on the field to back up his outrageous demand.

As we walked back to the car the chatter amongst the home fans was sprinkled with excitement.  Back in the play off positions, 7th game unbeaten & to top it all a certain J Beckford got the equaliser for Everton against Chelski.  Despite the horrible weather today had been a good day.

A tough trip to Burnley is next up.  On current form don't be surprised if we have gone 8 games unbeaten by the time league leaders, QPR, arrive at Elland Road in two weeks time.  The promotion word is working it's way into conversations more and more of late.  There is a light at the end of the tunnel.  Who needs the World Cup anyhow?

Bring on the Burnley and a good old fashioned battle of the Roses at a freezing Turf Moor.
Can't wait.
MOT

Posted by Andrew Butterwick at 21:27

Bloody fantastic blog and interesting to read your perspective on the day! (and what a cracking day it has been!)

Thanks for the kind comments and yes, as Wallace would say, it was a cracking day!
MOT