Fratton Park has not been a happy hunting ground on recent visits for the mighty whites.  Memories of a 6.1 thrashing on our last visit to the naval port still hang heavy on the minds of many a Leeds fan. So it was with a decent dose of trepidation that I rose from my slumbers at 5.30am for the long trip to Pompey.  As ever the Happy Chocker and the Quiet One were accompanying me as we boarded the train at York with bleary eyes. Would we suffer a hangover from our momentous efforts against Arsenal in midweek? Would Becchio recover from his injury in time to play?  Would we get a picture of the weird looking Pompey bell ringer?  All questions that we considered as the train hurtled southwards.  Big Steve and son George boarded at Donny and joined in the debate, although teenage George fell immediately asleep.  Well it was way before his normal getting up time!  A competitive football quiz game whiled away the miles until we reached Kings X.

The last leg of the journey from Waterloo flew by and we were soon in the warm surroundings of the Shepherds Crook pub in Fratton anticipating the game ahead.  Confidence amongst the Pompey fans wasn't exactly sky high.  A mixture of their fragile form and the recent Arsenal games on TV seemed to have reduced their expectations to "we'll be lucky to get a draw" level.  Buoyed by that and a few pints positive wagers were lodged by all of our team on a Leeds win.  Even the usually ultra cautious Big Steve plumped for a 3.2 win after much soul searching on going with his preferred 2.2 draw.  Mmmmm!

Fratton Park is a traditional football ground.  Nestled in an area of terraced houses and now threatened by the creep of industrial units the ground has an air of neglect coupled with some very dodgy DIY maintenance around the perimeter.  On the wall behind the away stand is a half finished mural of past players that looks as if it's been done by an amalgamation of bored community service conscripts and deluded Salvador Dali wanna be's.  The floodlights rise at each corner of the ground high into the sky resembling the old lattice type Subbuteo floodlights.  You know the ones that relied on a small battery and barely shed a light on the pitch.

Hunger dictated we braved the dubious looking burger and pie stall at the ground but were then pleasantly surprised as the fare turned out to be of Premier League quality.  The team news confirmed that Andy O'Brien hadn't recovered from his injury against Arsenal but Luciano was starting.  We squeezed into seats in the away end along with 3,000 other Leeds fanatics ready for the kick off. The pitch was very compact, ie not very wide and not very long.  Would this impact Leeds passing game?  We would soon know as the ref blew his whistle to get the game under way after a minutes applause for some late departed Pompey stalwart. 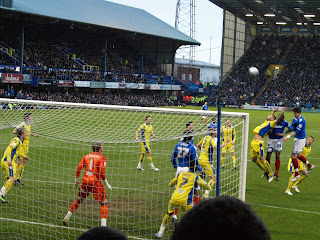 Concerns over the possible hangover from the cup games were soon apparent as Pompey seemed a yard quicker to the ball and soon put Mr Schmeichel under pressure.  Kanu, who looks like he is at least 105 years old and runs with all the elegance of a geriatric spinster, was causing the Leeds centre backs trouble from the off.  His height and positional play created chances in the first 10 minutes.  The tall robust Halford smashed a header against the bar from a corner and all of a sudden the chances of ending our poor record at Fratton Park seemed light years away.  The blue tide continued..........Kanu won a ball in the air and dropped it invitingly into the path of Nugent who blazed it over the top......corners were coming thick and fast as Leeds defended desperately.  At the other end we had only glimpses of Leeds' attacking potential as we struggled to get a hold in the game.  The only shot on goal was a free kick from Snoddy that Ashdown in the home goal easily dealt with. 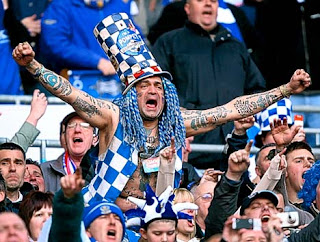 The inevitable goal came on 25 minutes.  Liam Lawrence, who troubled the Leeds defence all afternoon, found space on the left and headed into the box................drew a defender before laying it back to Ward who smashed the ball home to the delight of the home fans.  1.0 to Pompey.  Up to now the vociferous Leeds fans had given a master class in vocal support but now it was the home fans who had found their voice.  "Play up Pompey" chimed round the old ground led by Mr Weird with the bell. Leeds were now in serious danger of losing the game before half time.  A long chorus of WACCOE grew in volume as the Leeds fans tried to lift their heroes.  I reflected to HC that this had all the hallmarks of the game at Burnley complete with their own weird fan (you score two, you let in three).  The goal awoke Leeds from their slumbers, well slightly, and they fashioned a couple of chances, one for Howson and one for Gradel, the latter ending with a decent shout for a penalty.  But it was Pompey who finished the half on a high as yet more corners put pressure on the creaking Leeds defence.  The ref blew for half time and the Leeds team went off for an ear bashing from Lord Larry.  The freezing wind that was blowing through the dilapidated  away stand didn't do anything for my mood.  A combination of a tight pitch, eager and motivated opponents and a lethargic display from Leeds had given the impetus firmly to Pompey.  An inspiring team talk was needed from Mr Grayson.

Leeds came out early for the 2nd half looking a bit sheepish.  Had Lord Larry's words worked?.  They clearly had as Leeds tore into Pompey from the kick off.  They were now firing towards the hordes of away fans who were trying to suck the ball into the net.  Snoddy lined up a free kick 30 yards out and delivered a deep ball to the back post where Capt Fantastic, Jonny Howson, steered the ball back across the box for Becchio to sweep in majestically from the tangle of bodies to equalise.  1.1.  The cheers that greeted the goal contained a massive amount of relief but we were now very much back in the game. 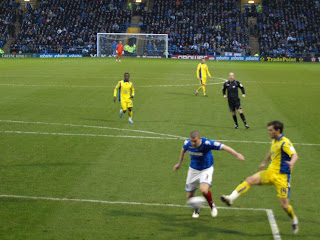 The momentum was now with Leeds as they moved up a gear.  Snoddy was suddenly all over the pitch jinking and taunting anyone who attempted to tackle him.  Bradders was gliding about in mid field buoyed by the confidence gained in recent games.  The Subbuteo floodlights gave a hint of what was to come as half of lights suddenly went out, not enough to stop the game, but enough to change the subject of the songsheets in the Leeds end.  "Pay your bills, pay your bills pay your bills" belted out with huge irony from the Milton end.
Back on the pitch things were looking good for Leeds.  Bradders lined up a free kick 25 yards out.  As he stood over the ball images of his 25 yard screamer against Arsenal flooded his mind.  All he had to do was hit it just the same and Leeds would be in front.  Mmmm.....when the ball hit the back row of the stand their was a look of resignation on HC's face.  Lightening doesn't strike twice.

I have already referred to the Burnley game where we came back from 2 goals down to win.  In that game an Alex Bruce howler presented Burnley with their second goal.  Spookily the same seemed to happen again.  Bruce and others failed to clear an innocuous bouncing ball in the box allowing Utaka to turn and slot the ball past a furious Kasper in the goal.  We must be the most generous team in the league?  The goal fired the home fans and momentarily quietened the vocal away support.  "You're not singing anymore" they gleefully accused the mighty whites fanatics.  Big mistake!

An strangely ineffective Sanchez Watt gave way for Davide Somma immediately after the goal.  With his first touch he received a slide rule pass 25 yards out and advanced to the edge of the box before finishing sublimely in the bottom corner of the net.  Bedlam ensued in the away stand as we celebrated the 2nd equaliser of the afternoon.  "You're not singing anymore" was returned with 100% interest to the silent Pompey crowd.  Delicious! 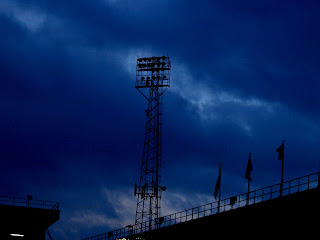 Leeds scented blood and poured forward.  The fragile Pompey confidence began to dissolve as Snoddy, Howson, Mad Max and Bradders moved smoothly through the gears.  Somma benefited from neat approach play but his shot was blocked and disappeared for a corner.  Big Steve's wager on a 3.2 success looked highly likely.  Then the dodgy battery in the Subbuteo floodlights gave up the ghost and the lights went out completely just as Pompey were attacking.  The ref blew his whistle to stop play just as a Pompey player was bearing down on Kasper in the twilight.  His shot missed but wouldn't have counted.  Confusion reigned.  The Tannoy man announced on his electric tannoy system that the problem was nothing to do with Pompey and the power was out all over Fratton.  Funny the street lights were still on, the lights in the stand were still on as were the lights in the buildings around the ground.  Maybe "all over Fratton" meant just the dodgy supply to their Subbuteo floodlights?  The Leeds fans were soon on the case.  "Pay up Pompey, Pompey Pay up" they mocked the financially challenged home club with a new version of their favourite chant.  WACCOE replaced the Pay up Pompey chimes as the ref sort to establish the likelihood of restarting the game.  The prospect of abandoning the game and having to come back in mid week filled me with dread.  Eventually the lights flickered back into life and the game restarted with 15 minutes left.  Leeds recovered some of their momentum and tried to prise out a winning goal.  At the other end a header whizzed past Kasper's post.  Then the lights went out again.  Anyone got some more 50p coins?  The tannoy man again insisted the power was out all over Fratton as a strange light glow acted as a backdrop to the powerless floodlights.  The light glow came from the retail shops and houses enjoying some mysterious electric supply in Fratton.  When the lights came back on the ref only played a further 3 minutes before bringing the game to a close, presumably he didn't want to risk the lights going out again.  So the game ended all square at 2.2.  Disappointing in that up to the lights going out we were in the ascendancy and could well have sent Big Steve home happy with his winnings.

Bradders had another good game well supported by the imperious Snoddy and Mad Max.  The shaky defence is still a concern though.  Should Collins have played to deal with the threat from the air from Mr Kanu? Leeds will have a well deserved rest now before we take on the Codheads a week on Tuesday.  I think they need it?

The journey home was difficult to say the least with missed trains and encounters with a psychopathic Sheffield Wednesday fan on the train home meaning I didn't get home to MOT Towers until 1am.  A very long day to witness another game of two halves from our beloved heroes.  Life is never dull watching Leeds.

Next up Hull City at the KFC Stadium.  A simmering contest with lots of Yorkshire pride at stake is guaranteed.
Can't wait.
MOT

Posted by Andrew Butterwick at 12:03