The case for the defence!

This week's frustrating draw against the Tykes of Barnsley has re-ignited the debate about the capabilities, or otherwise, of the Leeds defence. Fans have rightly questioned everything and everybody remotely connected to the organisation and implementation of the Leeds defensive effort.  Lord Larry even shared his frustration at the woeful defending with fans in his post match interview.  So just how bad are Leeds at keeping the ball out of their Onion bag?  Well the statistics show that they have let a staggering 52 goals in over 33 league games and bizarrely they have let more in at The Theatre of Hope than they have on their travels.  Thankfully those 52 stabs to my heart have been balanced by 62 ecstatic celebrations of Leeds goals hence the reason we are still remarkably in the play off positions. 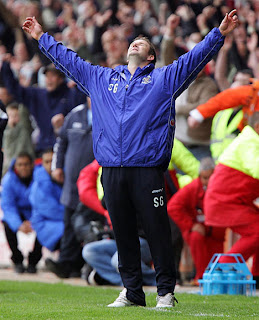 So what is the root cause of this excessive generosity to the opposing teams?  It's worth noting that Lord Larry's predecessor, Gary Mac, lost his job because he didn't seem to be able to put together an effective defensive formation and as a result soft goals were conceded week on week.  The difference now is that we have a much more potent attack than we did in Gary Mac's day.

So where does it all go wrong?  We have one of the most coveted goalie's outside the Premiership who has been in stunning form this season.  On paper the starting back four of Lichaj/Connolly, Bruce, O'Brien & McCartney are certainly not the worst combination of defenders in the Championship.  The preferred formation of 4.5.1 is in itself more negative than positive but goals continue to flow past Kasper with the same regularity as a pensioner on a diet of Prunes and Vindaloo.  Does the back four get enough protection from the midfield?  Certainly Snoddy was at fault for Barnsley's 2nd goal on Tuesday as he allowed the full back to run unchallenged for 50 yards.  Bradley Johnson has tightened up the centre midfield area since Xmas but sometimes has a tendency to go walk about and when he does nobody appears to drop in and cover. Set pieces seem to be where we are at our most vulnerable though as two of the Tuesday's goals showed and I think this is where we have a fundamental problem.  The communication between players at set pieces and in open play at times appears to be non existent as opposing players are left to find space that is all too often exploited to the extreme.  I had big hopes when Andy O'Brien arrived in that he would be an organiser and a communicator at the heart of the defence but sadly he seems to be short of the mark in that respect.

I suppose part of the problem with the defence is that we are an attacking side and by default we will at times be left exposed but ironically most of the goals since Xmas haven't been conceded because we've been caught on the counter attack...............they've just been bad mistakes or poor marking, organisation and communication at set pieces.

Is there a remedy?  Well based on the fact that the current mix of managerial team and players have yet to find the right formula to plug the leaking ship our only hope is that some experienced leader who has excellent organisation and communication skills is picked up in the transfer window. Or maybe the best idea is to go out and get the best defensive coach available to supplement Larry's team rather than rely on a White Knight coming in to rescue the defence?  One thing for sure if we don't sort the problem out in the next two weeks then we could well be doomed for glorious failure in our unexpected promotion push as May approaches.  Imagine losing 5.4 at Wembley?