Dawn was breaking as the Happy Chocker and the Quiet One arrived at Chez Nous for the journey to South Wales.  Car was the weapon of choice to transport us to the Liberty Stadium in time for the lunchtime kick off with the high flying Swans but first we had to pick up Justin the beer monster from Nevison. But it seemed the beer had got the better of him the night before as he was nowhere to be seen at the pre-arranged pick up spot.  Neither could he be raised by ringing his mobile or banging on his door............or what HC thought was his door...........so we reluctantly left him to his slumbers and headed south with a spare ticket.  He was eventually woken some 3 hours later by his girlfriend by which time we were already nearing the land of sheep, leeks and daffodils.

Confidence was not sky high amongst our little group after Tuesday's calamitous defending by the mighty whites and the prospect of playing one of the most attractive attacking teams in the league.  We pondered the forthcoming game in the concourse of the ironically named Liberty Stadium with the wonderfully named fan, "We beat the scum one nil" The irony, as our friend pointed out, was that once we arrived at the Liberty Stadium we were caged in by a mixture of steel gates and fences that makes the entrance to the away end look like a combination of Alcatraz and the vaults to Leeds United's transfer fund. 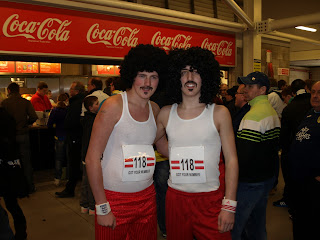 News of Lords Larry's decision to give Somma a starting spot and go with a 4.4.2 formation was received with apprehension.  Could a midfield four conquer our slick pass and move opponents? Especially without a recognised defensive midfielder to replace the suspended Johnson?  It was either a bold or stupid move by our leader.  Even the two fans dressed as Leeds supporting 118 guys looked worried!

Despite the stadium being shared with the Rugby playing Ospreys the pitch was like a billiard table, ideal for a team that likes to pass the ball on the ground and not in the air.  Within minutes of the start it was obvious that Swansea meant business as they immediately got in the groove zipping the ball from one side of the pitch to the other with superb one touch "pass and move" style.  This was going to be a long match.  Buoyed by their team's excellent start the home fans raised the atmosphere to white hot as they got behind their favourites with the 3000 fans in the Leeds end unusually subdued.............probably as a result of the early morning start and the apprehension of what was to come?  Before Leeds could draw breathe Swansea had hit a post as Dobbie  fizzed in a stinging shot that Kasper scrambled across to.  I exchanged glances with HC, glances that portrayed a dark foreboding of what was about to unfold.

In the first 10 minutes Leeds hardly put a foot on the ball and it was no surprise when the Swans took the lead.  Snoddy lost the ball and Swansea took immediate advantage as Scott Sinclair danced into the Leeds box before playing a one two with Moore and finishing in style. 1.0 Swansea.  Leeds had no answer to the simple pass and move philosophy that Swansea employ from numbers 1 to 11.  Defenders were caught time and again in no man's land between getting tight on their man or holding off for the inevitable give and go.  George McCartney was completely lost trying to deal with Nathan Dyer and carried the demeanour of a condemned man even before the clock had reached twenty minutes.  Chances flowed for Swansea but somehow Leeds hung on and prevented more goals damaging their chances of retrieving something from the match.  Even when Leeds did attack and get the usually illusive Snoddy free his twisting run into the Swansea box ended with a lame cross straight into the keepers hands.  The 4.4.2 system definitely wasn't fit for purpose in this match. 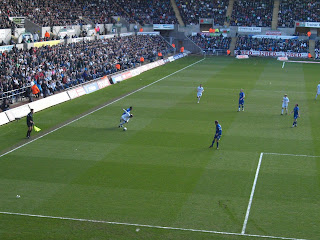 As the game approached half time though Leeds finally got some traction and exerted some pressure on the home goal. A neat move saw Snoddy fire a shot goalbound only for Tate to stop it with his hands. Penalty screamed 3000 fans behind the goal plus the Leeds team only for Mr Dowd and his linesman to inexplicably dismiss the claim even though they had a clear view of the misdemeanour.  When Killa pointed out to the linesman the mistake he had just made he received a booking for his troubles.  I wonder if referee Dowd and his linesman will have a tinge of guilt when they watch the replay?  Don't suppose they will but it is infuriating when a blatant penalty is clear to fans sat in the stand 50 yards away or more but apparently not seen by the preening, full of himself referee not 5 yards from the incident.  What a twat!  The injustice of the penalty roused Leeds and they finished the half on a high as Somma rose to meet a cross and smashed his header against the bar whilst Mad Max so nearly got his shot away when free in the box.  There could be hope in the 2nd half.  We just had to figure a way of stopping the host's easy on the eye style of play? 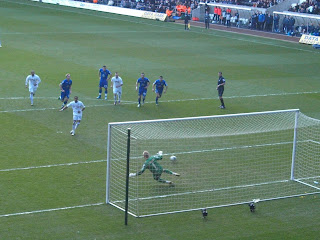 Unfortunately the home team came out refreshed from the break to wreak more havoc on our fragile confidence. Dyer found space on the right hand flank, mainly due to McCartney "waiting" 10 yards away from him, and ran at the back pedalling defence.  Mad Max tried to help but only managed to bundle Dyer to the floor in the box.  Penalty and Mr Dowd's running serenely to point at the spot with that stupid grin on his face.  "You saw that one you bastard" I pointed out to him.  He didn't book me. Scott Sinclair slotted the ball home and in doing so killed off any chance Leeds had of rescuing anything from the game.  From there on in it was almost exhibition football as Swansea toyed with Leeds.  Swansea scored another exquisite goal on 75 minutes to make it 3.0 and although Somma had two decent chances to give the score some respectability it was not to be.  The Leeds fans resorted to a final 20 minute rendition of "We all love Leeds" as the game slipped painfully away from their grasp.  Mr Dowd's final whistle put us out of our misery.

Swansea were very impressive with their pretty pass and move style and were the best team I have seen this season bar none.  It is no disgrace losing to a team like this but what is a worry is the fact that with one player missing, Bradley Johnson, we haven't got suitable resources to replace him and therefore sent out a compromise formation and team that just were never going to be good enough to compete. We were out thought and outclassed today and found wanting in every department. Hopefully with the loan window availability lasting while the end of the play offs from this week we may see some new faces at the Theatre of Hope.  Once again there will be questions of the powers that be at Leeds as to why there was no strengthening of the squad in the transfer window

It was a despondent car that headed back north.  A week that had started so promisingly against Norwich turned agonisingly frustrating against Barnsley and finished in embarrassment against the Swans.  A week's a long time in Football as is teh journey home from Swansea.  HC asked if there were any positives from today as we reached the outskirts of Birmingham.  "Well at least the car was still there when we got back to the so called Park and Ride gypsy camp" was my stinging reply.  Donny Rovers up next.  Please God don't let us fuck that one up?  If only for Seona's sake!
Can't wait.
MOT

Posted by Andrew Butterwick at 22:17