The winter weather had left Leeds with a blanket of wet slushy snow covering it's murky skyline as we trundled into Leeds station.  The snow had also caused some doubts about the match going ahead but thanks to the excellent drainage at Elland Road and the diligent groundsman and his team those fears were unfounded.  The Happy Chocker had collected our winnings from last week's punt on Snoddy getting the first goal so there were plenty of smiles as we divided the spoils in the Capt's Lounge. But what about today's game?  Well after much debate HC plumped for Capt Fantastic Howson whilst I split my choice between Howson and Mr Becchio.  Could we pick up winnings for the third week running?

Whilst we were having our pre match refreshments and watching a disgruntled Mr Beckford get the hook in the Cup match against Chelsea my gaze wandered to the collection of caravans and support vehicles on the waste land behind the kop.  They were there for the Valentines fair that was occupying most of the main car park on Elland Road and it was just like a scene from "My big fat Gypsy wedding". I half expected some young girl sporting an enormous wedding dress to pop out of one of the expensive caravans at any minute.  There must be a lot of money in running Fairs and avoiding paying tax? 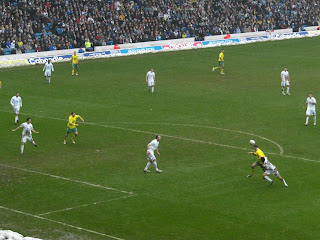 Back on Planet Leeds Lord Larry had picked the same team that disposed of Bristol last week.  Sanchez Watt failed to make the bench. Norwich had brought a good number of noisy fans that added to the atmosphere in a packed Theatre of Hope. So we were all set for this crucial game against not only fellow promotion hopefuls but also fellow promoted team from last year.  The grey miserable West Yorkshire weather couldn't dampen the spirits of the 31,000 fans as the game kicked off.  Leeds were straight into the groove as they put the Canaries under immediate pressure as they took a firm grip on the early proceedings.  Capt Fantastic emerged from the midfield traffic sweeping aside attempted tackles before steering a shot just inches wide of the Norwich post.  The crowd Oooooohed in agonising fashion.  Next Becchio got onto the end of a cross from Snoody only for the ball to bounce off the post back into the floundering goalie's arms. Another Ooooh only this time followed by words such as "Jammy bastards".  Things were looking good for Leeds though but Norwich haven't got to where they are in the league by good luck and soon they were threatening Kasper's goal with a header that bounced off the outside of the post followed by a long range shot that the Dane dealt with efficiently.  This was not a boring game!

The frenetic pace of the opening 15 minutes continued as both sides seemed only to be programmed to attack leaving fans on both sides hardly time to draw breath.  Then Leeds took the lead.  Snoddy got up at the near post to flick on a free kick to the back post where the recently misfiring Luciano rose like a leaping Salmon to bundle the ball into the net and gain me yet more winnings from my earlier bet.  Get in! 1.0 Leeds. 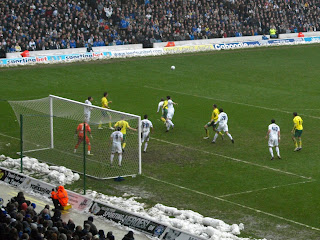 Leeds were now on fire and doing a good impression of Sylvester the cat playing with Tweetie Pie as the Canaries ran for cover.  Howson was in the thick of it magnificently supported by Kilkenny as Leeds looked for a second goal.  Capt Fantastic rattled the bar with the goalie stranded.  Tweetie Pie was living a charmed life. Leeds' ability to spread the play wide was the key to their superiority as both Snoddy and Mad Max enjoyed teasing the Norwich full backs. Snoddy had a decent shout for a penalty turned down as he appeared to wrestled to the ground as he chased a ball to the bye line.  All was well on Planet Leeds even though we were only one goal to the good we were well worth that solitary goal advantage. Norwich did look dangerous on the break though and once again Kasper was stretched with a long range shot that he turned over the bar. Pantomime villain, Grant Holt, had been kept relatively quiet up to now but his ability in the air and holding up the ball unsettled our famously fragile defence.  As the game flew to half time surely Leeds must get another goal?  Howson once again went near after neat approach work but we were about to be hit by a severe sucker punch.  Andy O'Brien headed an innocent ball into the box straight to a Norwich player on the right.  With the Leeds defence in disarray the ball was floated to the back post where Holt dropped a perfect ball to the unmarked Lansbury who drove the ball into the net past a furious Kasper.  1.1. Bollox!  The fact that the referee blew almost immediately for half time added to the pain.

Frustration reigned supreme amongst the urinal philosophers during the half time gents debate.  "We can't defend to save our lives" one guy announced.  "how the f*** we're not at least 2 up is beyond me" another fan more realistically observed.  Elsewhere a young fan was pleading with his Dad to buy him a hot chocolate to warm him up, "You'll have to pay yourself" Mr Tightarse Dad responded!.  The gents debates are always enlightening! 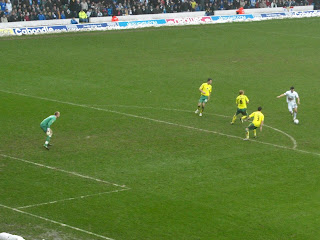 Any thoughts that the 2nd half would be any less frantic or exciting than the first 45 minutes were soon dispelled as both teams launched themselves at each other like demented kamikaze pilots.  Howson again burst from midfield and teased a shot no more than a millimeter past the post. Snoddy and Max were doing their level best to create chances for Leeds to retake the lead but it was Tweetie Pie's team that were looking the more dangerous. Holt made a nuisance of himself and the ball bounced back off the post.  Time for Leeds to have a bit of luck.  But worse was to come as the impressive Hoolahan revelled in the space afforded by the open style of the game.  His ability to drift into space and then make good use of the ball was upsetting the Leeds defence and when he escaped his marker inside the box and received an intelligent pass he slipped the ball passed the sprawling Kasper goalwards and despite a desperate Leeds leg the ball ended up in the net.  2.1 to Tweetie Pie. Bummer!

Leeds were now wobbling as Norwich tried to kill the game off.  But Leeds are a resolute side and even though they were taking some near mortal blows at the back they still poured forward looking for the equaliser.  Snoddy, Max and Becchio all went close. You could taste the tension in the ground as first one goal then the other was under attack.  With minutes ticking away Lord Larry told super sub Somma to get stripped and dragged off the impressive Killa.  "I wouldn't have taken Killa off" HC announced.  "Somma ALWAYS scores when he comes off the bench" I opined.  Which he duly did..........and what a goal!  Becchio dragged his tired legs and won a hopeful ball in the centre of the Norwich defence.............the ball ballooned up and into the path of Mr Somma who struck it on the volley into the net like he was shelling peas. Get innnnnnnnnnnnnnn! the roar that accompanied the goal nearly lifted the roof off the famous old stadium. 2.2. 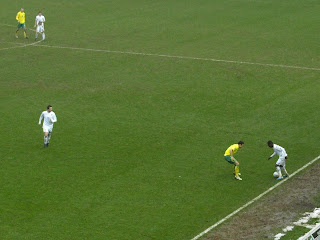 There were 15 minutes left.  One thing for sure was that neither team were going to play out the draw.  The momentum was now with Leeds as both teams relied on pure adrenaline to get them through the last few minutes of a pulsating game. Billy Paynter came on for the last minute of normal time as 5 minutes of added time showed on the board. Hearts were definitely in most of the fans mouths as each team went for the knockout punch.  The tension was unbearable............so why were fans leaving early? Never understand that.................Then Paynter exchanged passes with Somma and found himself some space 12 yards out..............could he connect?..............Yes he could as the ball avoided the flailing hand of the Canaries goalie and bounced in agonising slow motion just past the post. 30,000 fans had their heads in their hands as the final throes of a spell binding game came to a close with honours even.  This was a game that lived up to the pre match billing as one of the games of the day.  It was pure excitement from the first to last whistle and a credit to both sides as the entertainment value went off the scale.

The cold and the wet in the shuttle bus queue didn't seem to matter as the buzz and chatter replayed the key points of a fantastic match.  In some ways it would have been a shame if either team had lost.......but it would have been nice if Paynter's last shot had crept in.

Barnsley at Elland road on Tuesday as Leeds seek to gain revenge for the annihilation at Oakwell.  Hope we do for the Happy Chocker's sake as he works with numerous Barnacre fans who take delight in all of Leeds set backs.  I think he will be safe though....... Leeds to get 5 this time?
Can't wait.
MOT

Posted by Andrew Butterwick at 20:42