Yorkshire derbies always make me nervous.  Fellow football supporters from the broad acres of Yorkshire rejoice in singing "you're not famous any more" and then treat each game against the mighty whites as a cup final? Doncaster Rovers fans don't quite fall into that bracket but the potential to end up with a significant amount of egg on our faces against a team with one of the worst away records in the league was high.  Add that to a severe dose of Post Swansea Stress Syndrome and the mood wasn't entirely positive as we munched our pre match pies in the members bar at Elland Road.  HC was even expecting a 1.1 draw but I tried to lift the heavy air of foreboding with an optimistic 3.1 prediction.

The mood in the members was about to be lifted from an unexpected source though.  For those who regularly attend the well equipped members bar before the game you will know that they always read the team sheet out at around 2.15pm in a very professional manner.  Not this week!  Clearly they had someone who was either on work experience or who had never seen a Football game in his life behind the mike.  "Number one...Kasper Schmeichel, starting....number four...Alex Bruce, on the bench....number six..Richard Naylor,on the bench....number seven...Max Gradel...starting" puzzled frowns swept round the room.  What the f*** was going on? was the universal question as the poor announcer continued to read from a squad list adding "starting" or "on the bench" after each name.  Soon a chorus of "you don't know what your doing" rose above the chuckling and laughing.  As the late Eddie Waring once famously said of Don Fox, poor lad!  Who's this new loan signing, Onthe Bench, we've got? I enquired. Once I'd checked twitter for the actual team it was clear that Bruce had lost his place to Bromby and Bradders had ousted Somma from the starting line up.  Back to the favoured 4.5.1 formation with the combative Johnson adding some much needed steel to the creative mid field.  I was still smiling as I took my seat.

Donny's team was ravaged by injuries but they had wheeled out the ever dangerous Billy Sharp (starting) despite his hernia problem.  Leeds needed a confidence boost after last week's reverse and they were soon attacking the South Yorkshire goal.  Mad Max bamboozled the static defence and got his shot away only for an outstretched leg to stop the goal bound attempt.  The ball ballooned to Capt Fantastic, Jonny Howson, who's shot went high into the stand.  The first of a stream of chances that were to go begging in the first half.  Next Snoddy took advantage of some Leeds like defending in the Donny half and whizzed a curling shot over the bar.  Leeds were certainly not holding back as Donny showed exactly why they have an awful record away from the Keepmoat.  Johnson soon showed why Leeds missed him so desperately last week as he won ball after ball in midfield. 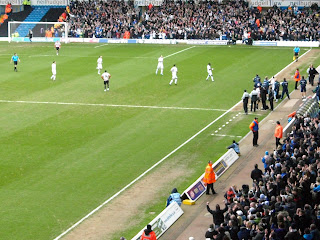 Mad Max was irrepressible as he ran at the Donny defence at every opportunity with the ball apparently super glued to his foot and on 12 minutes he got just reward.  His persistence in midfield paid off as he hoovered up the ball up and turned goalwards............the hoop shirted defenders backed off as the Ivorian hit a superb 25 yard shot past the despairing goalie.  1.0 Leeds and Donny were lucky to have nil.

The Swansea blues were a distant memory as the whites tore into the hesitant Donny defence.  Killa had two good chances that the goalie saved Becchio pulled a shot wide and Snoddy danced through the defence and rounded the goalie only for the shot to roll by the post. Even Bradders got in the action but saw his attempt just go over the bar.  "We'll get a hat full at this rate" HC enthused clearly dismissing his earlier1.1 prediction.  This was men against boys and the only question was how many would Leeds score?  Even Leeds couldn't mess up such superiority...........could they? 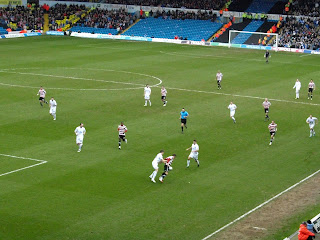 Mad Max was causing as much havoc in the Donny defence as Peter Ridsdale does to the average football club's balance sheet.  He was just electric as he taunted and teased whichever defender dared to come near him.  But it was still only 1.0 as the breathless game approached half time.  Donny hadn't even had a shot but the fateful sucker punch was about to deflate the euphoria around the Theatre of Hope.  The half fit Billy Sharp got half a yard on the home defence as he latched onto a sublime ball over the top and tried to steer the ball past Kasper Schmeichel (starting).  The ball bobbled waiting for a Leeds foot to clear it but Mr Sharp lived up to his name and slotted the ball home. 1.1 and half time.

The Urinal philosophers were not happy.  "Unfuckingbelievable only Leeds can have 99% of the game and come in level" a raging fan commented.  "That Kasper Schmeichel's fucking useless get Higgs on" a deranged fan offered but the general feeling was one of deja vu.  We've all seen it too many times.  The paper thin defensive line had once again undone all the great attacking verve leaving fans nerves a jangling.

If nerves were jangling at half time they were positively screaming a minute after the restart as another session of hesitant home defending allowed Moussa to drill home Donny's 2nd goal.  Donny two shots two goals.  Leeds twenty shots one goal. 2.1 to Donny.  How an earth we were behind in this game will remain one of the greatest football mysteries since Michael Ricketts was awarded an England cap.  The crowd were now on the edge of a revolt that would have made the recent upsets in the Arab countries look like a mild disturbance in a convent. What we needed was a hero.  Come on down Jonny Howson!  Capt Fantastic's persona is carved out of white marble and his commitment to the Leeds cause is unshakable.  Within a minute he had won a ball he had no right to win from a gaggle of Donny midfielders and turned on his famous afterburners as he strode away from the following pack to hit a trademark shot into the bottom corner.  Get innnnnnnnnnnnnnn!  The revolting crowd were now celebrating as if it we'd just won the cup!  2.2. 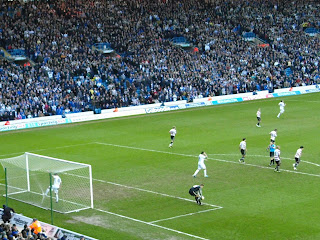 The game was now finely balanced as Donny's half time tinkering with their formation had given them more of the possession.  Hearts in mouths time as the useless Schmeichel made a couple of fine saves but at the other end Leeds' attacking machine was gradually wearing the Dons down.  Bradders sailed in at the far post for a header that skimmed over and he ended up tangled in the net. Mad Max escaped twice only to fail his one on one test with the keeper.  Snoddy created chance after chance from the right but the ball wouldn't go in.  Becchio took a bang to the head and again ended up with a Kisnorbo hat on.  This was now one hell of a game as Lord Larry's team played the only way they really know.....on attack!

The 3rd goal came as Bromby intelligently chested down a cross to Becchio waiting unmarked on the penalty spot who calmly fired home in front of the delirious kop. 3.2 Leeds who were now on a unstoppable roll. 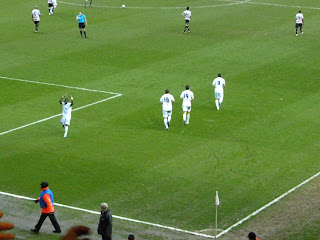 Even at 3.2 most Leeds fans know the game is still in doubt and I nervously looked at the clock, 10 minutes to go.  Fingernails were now disappearing at an alarming rate!  Billy Paynter came on for a tiring Becchio searching for his first Leeds goal.  Billy Paynter may not have scored yet for Leeds but the crowd recognise a player who has some talent and is prepared to knuckle down and work hard and there was a collective will for him to now break his duck.  Snoddy exchanged passes with Killa and left the full back for dead and glided into the box...............Paynter was lurking on the 6 yard box as Snoddy's cross came in............."go on Billy 26,000 Leeds fans shouted...........but his firm shot hit the goalie and rolled to Mad Max who gobbled up the afters to seal the match at 4.2.  Hard luck Billy.

Most teams would kill the game off with a game of keepy ball for the last few minutes of a game they were winning.  Not Leeds.  Especially when the crowd were baying for Billy to score.  "Come on Billy, Come on Billy", rang round the famous old stadium.  A header flashed wide from the unlucky Paynter as the crowd gasped.  But it was Capt Fantastic who rounded things off as he connected with a beautiful through ball from Bromby and finished in style. 5.2 Leeds.  All's well that ends well.  The final whistle brought to an end an extraordinary game. Leeds dominated the first half but went in level, then found themselves behind in the 2nd before pulling away in some style from a struggling Donny side.  Following Leeds United is never ever dull!

Billy Paynter gratefully applauded the crowd at the end for their support.  I'm sure he'll score soon for Leeds, last minute at QPR anyone?

The crowd was buzzing as we made our way back to the train station with chants of "Come on Billy" wafting across the West Yorkshire night sky.  I think we have a new cult hero in our midst.  Mad Max was the star man today though closely followed by Howson and Snoddy.  Yes the defence is a worry. Yes the team put you through the wringer every single game but don't you just love them?

Preston North End up next on Tuesday.  Now we won't be safe until we get 7 goals against them.  Should be another nerve jangler?  Seat belts fastened blog readers.  The finishing line is on the horizon.
Can't wait.
MOT

Posted by Andrew Butterwick at 20:39