New kid in town and the end of the Tuesday curse? 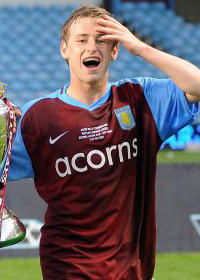 Leeds finally secured one of their loan targets today in the shape of Barry Bannan from Aston Villa.  According to Glyn Snodin Bannan is a similar player to Neil Kilkenny in that he likes to pass the ball but he can also "get about the park"  Mmmm wonder if that was a dig at Killa? Hopefully he will provide some cover for the holy trinity of Howson, Johnson and Killa in the middle of the park although I suspect a number of Leeds fans were wanting a solid defensive midfielder to join the mighty whites....................or even a defender who could plug some of the holes in our sieve like defence?  Time will tell if this is a season changing signing or another fringe type player? Good luck to him. Will there be more loanees on the way? From all the noises coming out of Thorp Arch and the continued porous defence I suspect the answer to that poser is yes!

And so to our next match. Preston North End away and yes it's on a Tuesday.  The more superstitious of us will focus on our horrendous record in league matches on Tuesday's this season.  For the record this the 9th league game on a Tuesday and we've yet to win one.  The first two Tuesday horror shows saw 11 goals fly into the Leeds net, 6 of those daggers through the heart came from our hosts for this game. Preston are the strongest team in the league though as they currently hold the other 23 teams up from their position at the foot of the league.  The arrival at Deepdale of the shy retiring Phil Brown has sparked some life into their fight against relegation therefore I'm expecting another tough test for the mighty whites but one they should win especially if the wing wizards of Mad Max and Snoddy can weave their magic again.  Injuries could rob Leeds of the services of Andy O'Brien and Becchio who both picked up knocks in Saturday's game.  Time for Billy Paynter to get that all important first goal?  Sounds good to me.

Tuesday nights fixture list does look interesting with all the teams around us having potential difficult midweek tests.  Faltering Forest go the Blunts, Norwich travel to the upwardly mobile Leicester, the two dark horses Burnley and the Codheads clash at the KC whilst Swansea host free scoring Watford.  Cardiff look to have a slightly easier task of disposing of Palace at Selhurst Park.  With only 5 points separating ourselves in 6th and 2nd placed Swansea things couldn't be any tighter.  11 games left and every point is worth it's weight in gold now. Yes we can look back at various games and speculate on numerous "what ifs" and we can certainly worry about our generous defence for the forthcoming games but we are right in the promotion mix and have just as good a chance as 7 other teams of clinching promotion to the promised land.  When we lost the first game of the season to Derby everyone's expectation level was of survival.  Those expectation levels have risen considerably so that failure to make the play offs will now be seen as a massive disappointment.  Has any club done back to back promotions from League 1 and the Championship?  I can't think of one off the top of my head so I think we need to keep some perspective on what we have achieved so far.......................with a drop of frustration in our inability to sort the defence out!

So will we break the Tuesday curse? Will Billy get his first goal?  Will we get promoted? In the words of Meg Ryan...Yes! Yes! Yes!
Seat belts tightened.  Here we go again.
Can't wait.
MOT

PS: the match report won't appear until late Wed I'm afraid. Straight to London after the game for an early meeting Wed.


Posted by Andrew Butterwick at 21:29