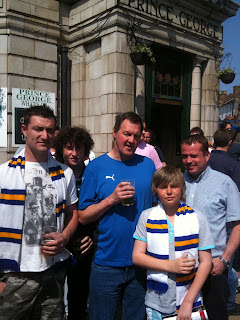 The glorious sunshine that greeted us as we sped down the A1 for our latest "Cup Final" against Crystal Palace lulled us into a false sense of optimism.  All seemed good with the world as we gobbled up the miles on the unusually trouble free Bank holiday roads.  The Happy Chocker, Justin the beer monster and Jordan, a late replacement for the Quiet One, filled the car with pre match chatter.  After Friday's much improved showing against high flying Reading hopes were high that with just three tantalising games to go we could still cement a precious play off spot.  We arrived at the ground in good time to find a parking spot and join a gaggle of other fans at The Prince George hostelry for per match refreshment.  Palace and Leeds fans mixed well in the Mediterranean like weather discussing both team's different needs for the three points.  I found it a touch ironic that such an amicable and enjoyable session of pre match banter was taking place not 6 miles from the home of Palace's nearest rivals, Millwall, where the concept of home and away fans enjoying a pre match pint together is about as likely as Kate Middleton ditching Prince William at the alter this Friday and eloping with Prince Harry. 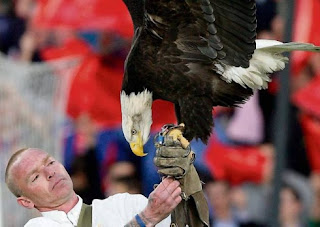 6,000 expectant Leeds fans had made the Easter Monday journey and were in good voice before the game giving a hearty rendition of WACCOE as the Palace cheerleaders and the flying Eagle mascot competed for the crowds attention.  In true diehard fan tradition my attention had been drawn to the team sheet (honest!)  Remarkably Lord Larry had kept the same starting line up as Friday, which meant Jake Livermore started in the centre of mid field!  After his lack lustre and reckless showing on Good Friday I was puzzled.  Surely Killa is a better bet as a playmaker? After all this was a must win game.  As expected Luciano was still injured.  How we would miss his finishing in this game.  The atmosphere inside the ground built to a crescendo as the ref blew his whistle for the start of a season defining 90 minutes for the mighty whites.  Both sets of supporters lifted the decibel levels a notch and we were under way. 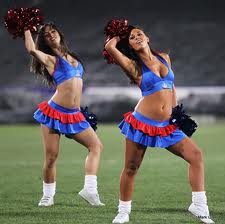 Within 90 seconds of the start the wind was well and truly taken out of Leeds' sails as Palace took the lead with the first attack of the match.  An innocuous ball was flung deep into the Leeds box and a Palace head easily won the header and dropped the ball back towards the penalty spot where there appeared to be plenty of time to clear but Danns was allowed to get his shot away which was cruelly deflected past Kasper.  1.0 Palace and the home fans were on cloud nine.  Leeds struggled to recover from this early shock as the ball pinged about in the air and on the ground but rarely sweetly between pairs of Leeds player's feet.  Mad Max tried to find Snoddy in the box but was denied by a good clearing header to give Leeds one of quite a number of early corners.  But none of them created any real danger in the Palace box.  In fact I can't remember when we last looked dangerous from a corner? I began to get that all too familiar feeling of despondency in watching Leeds on their travels of late.  Nothing was going to plan and quite frankly nobody on the pitch in a yellow shirt looked capable of making any impression on the game.  Livermore in particular looked ineffective as he strolled about as if it was a meaningless end of season game and he'd rather be on his holidays.  Leeds' performance took on a farcical feel when an attempted clearance from Kasper clattered into Naylor and diverted away towards the touchline.  Kasper set off in pursuit to try and get to the ball before the Palace centre forward, Iverson, only he didn't.  So Kapser had a decison to make as he was 35 yards out of his goal.  Should he stick or twist?  Did he close Iverson down or scuttle back to the goal.  He rightly chose the first option leaving his goal completely uncovered as he followed Iverson to the corner flag where Connolly eventually came to his rescue.  Somehow they prevented the ball from going any where near the goal and the chance fizzled out.  Hopes of a play off spot were draining away like sand through an egg timer.

When an unmarked Jermaine Easter missed a free header from six yards out the writing was well and truly on the wall for Leeds.  It was just a matter of time before Palace added to their one goal lead.  Somehow we got  to half time with just a single goal adrift but any dreams of securing a play off place and getting to Wembley were disappearing faster than Justin the beer monster downed his first pint of the afternoon!  Boo's rang out from the frustrated and disgruntled Leeds fans as the teams trooped off for their half time Orange.  Livermore and Johnson had been anaemic in midfield.  Lichaj was struggling at left back and the whole team lacked any sort of fizz.  HC was busily finding out how Forest, Burnley, Millwall and Hull were doing.  I was resigned to the fact that Leeds' destiny was in their own hands and they were doing a very good job of pressing the self destruct button............something they have been threatening to do for the last two months.

Killa and Watt appeared to replace Livermore and Connolly for the 2nd half.  This lifted the Leeds crowd as they tried to compete with the impressive home fans and their drummer boy.  There was now more purpose in Leeds attacking play as Killa spread the ball wide at every opportunity as Lord Larry changed to a 4.4.2 formation.  Snoddy had been continually fouled as he teased the home full back in the first half and this continued in the 2nd.  When he didn't have his legs taken from him he got in some good crosses, but with Becchio absent it was left to Paynter to get on the end of them something he failed to do.  In fact it was the skilfull Sanchez Watt who so nearly equalised with a lovely header that Speroni acrobatically saved.

Somma eventually replaced the hard working Paynter. Paynter's lack of shots or headers on target spoke volumes for the root of some of our problems today.  As the match crept to a conclusion it became more and more evident that we weren't going to salvage a draw and that Palace would reward their fans with a win that almost certainly means they will stay in the Championship next season.  Somma spurned a couple of good chances as any realistic hopes of a play off place faded away in a bit of a whimper.  Finally the Palace full back got a second yellow after his 97th foul on Snoddy in the 94th minute but by this time it mattered not.  The ref's whistle ended our misery and signalled wild celebrations in the home stands.

The Leeds fans streamed away quietly in disappointment.  We had missed Becchio badly but once again we lacked that bit of creative quality when it mattered most. With two games to go 3 points behind 6th place Forest and Burnley and Millwall in front of us we have blown our play off chance, barring some extrodinary results in the remaining two games.  A fact we mulled over as we picked our way through the streets of London on our way home. We can have no complaints regarding dropping out of the play off picture.  One win in nine games is not promotion form.  This is a season that will be remembered as so near yet so far away from promotion.  Thing is we may not get as good an opportunity as this for a couple of seasons.  Summer needs to be a rebuilding period for Leeds with the defence the main priority followed by aquiring a second quality striker to back up Becchio.............and if he disappears we'll need two!

Statistically we can still get a play off place and until the final door is closed there will still be a glimmer of hope but in my heart of hearts I believe today's loss was the final nail in our play off coffin.  With Burnley and QPR still to play let's try and go out with a bang at least after all Football is a funny old game and you never know....................
Can't wait.
MOT

Vid of yours truly interviewed before the game.

Posted by Andrew Butterwick at 00:18