So after months of planning, frustration, excitement and expectation the big day has arrived.....................the final home game of the season and despite an awful run which has seen Leeds harvest only a paltry 6 points from the last 24 available we still have a slim chance of having a passing interest in the play off bun fight when we travel to champions elect QPR on the last day of the campaign.  Remarkably if we fail to make the play off's it will be the first time since the 2004/5 season that we have not been promoted, in the play off's or relegated in a season.  No wonder my hair's gone grey!

So what are the chances of Leeds Utd securing that precious 6th place.  Well for anyone who's watched them stutter and stumble since Xmas the answer will be a resounding nil.  Our away form has disintegrated since the season of goodwill with alarming fragility.  Apart from victories at Preston and Bristol City travels away from Elland Road have signalled much soul searching and recriminations on the journey home with the latest defeat to Crystal Palace proving typical.  A match we needed to win, but didn't.  A match you got the feeling that somewhere beneath that frustrating veneer we had the ability and capability of winning but just didn't seem to gel it all together. Almost inevitably the latest capitulation sparked an increase on cyberspace of fans calling for Lord Larry's head.  Now on one hand I can understand the view that the season's objectives have been more than met by achieving a top ten finish and therefore it's ridiculous to suggest that he should face the chop.  But of late there has been a worrying trend of team selections going horribly wrong and only rectified by major surgery at half time.  Palace was a classic example.  Not many of the 6000 travelling managers could understand why Jake Livermore was handed a starting place after he'd been withdrawn at half time against Reading and the team improved? So when the surgeon's gloves came out at half time again and Livermore was again replaced by Kilkenny most fans were asking "does Grayson actually know what his strongest team is"  One thing for sure there will be more than the usual interest when the team sheet is announced for the Burnley game.  If the names of Livermore and Paynter are in the starting 11 then the carnival party atmosphere will somehow be deflated before a ball is kicked.  One other point that erodes the view that we've done OK this season is to look at where the other two teams that came out of League One with us are.  They don't appear to have spent a fortune to strengthen their teams for the championship yet they sit above us in the table.  Just saying! 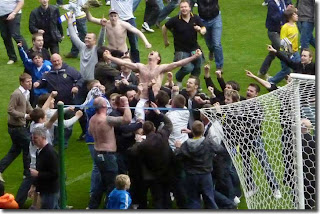 The team and Lord Larry have been making defiant noises this week that they will battle to the wire, which is the least we would expect, but our destiny is not in our hands.  We are relying on Millwall and Forest slipping up.  If we do beat Burnley then our hopes of a 6th spot will go to the last game.............and if Forest and Wall  do have a wobble this weekend we could actually be in 6th spot come the last game.  As Kammy would say "Unbelievable Jeff"  They can't really pull that off can they?  I know Leeds Utd don't do easy but that really would make last year's celebrations for the victory against Bristol Rovers look like a vicars tea party !  Guess what?
Can't wait.
MOT
Posted by Andrew Butterwick at 22:12