Striker arrives at the Theatre of Hope.........but will he score goals?


At last one of the numerous "targets" of the summer recruitment drive has made it past the rigorous negotiation stage and made it to Thorp Arch for his medical.  Not only that he actually passed it and goes straight into the squad for tomorrows game against the Codheads. And the mystery player turns out to be Andy Keogh who we have secured on loan until January.  So at least Ethel the Tea lady can now sleep easy knowing she won't be drafted into the team.............. for the time being anyhow! 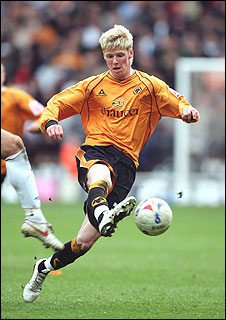 Once the relief that we've actually signed a player had passed I began to get that sickly feeling in the pit of my stomach.  Andy Keogh is now 4th or possibly 5th choice striker at Wolves and clearly surplus to requirements so possibly not the goal poacher we were looking for to cover Becchio's worrying absence? Glancing at his record at Molineux doesn't inspire me neither, 11 goals in his only full season in the first team before losing his first choice striker tag to EBanks-Blake and Chris Ilewumo.  Delving deeper into his strengths and weaknesses it is apparent that whilst he is well suited to operating in a 4.4.2 system and supporting an out and out goal scorer he is less than effective playing in a 4.5.1 formation as a lone striker.  The reason for this is that he carries out all the tasks a good striker needs to do, closing down, winning balls, holding the ball up, creating chances but fails on the key criteria for a good number 9................putting the ball in the net! Add to that his lack of match practice, 25 games on loan last season, it's not very likely he's going to hit the ground running is it?  Hope I'm wrong.

Much as it grieves me to say it I think the signing smacks of absolute desperation.  Steve Howard's name had done the rounds on the rumour mill.  Perhaps he was the striker who was ready to come last week before Cuddly Ken's brusque technique in closing the deal back fired.  Even though he'd dropped down the pecking order at Leicester at least he scored goals..............well he always did against us but then again so did Billy Barndoor? So we are now officially shopping at car boot sales not even Netto in our search to strengthen the squad.  You can pick some bargains up there but you've got to be damn lucky.

So putting my rant over the transfer activity to one side what about our game against Hull.  Without Gradel and Howson I'm thinking we will revert to a 4.4.2 system for the simple fact that we haven't got a 3rd central midfielder unless Nunez plays the Howson role? Now if he did play there Lloyd Sam could replace Gradel out wide.  Which ever call Lord Larry makes it won't be easy.  Hull looked to have pulled together a strong squad even if they do still have Mr Bullard draining their wage budget to the tune of £40k per week.  It's another tough game for Leeds but if they can harness the fighting spirit they had on Saturday, without the sendings off, then we could post our first points of the season.  It will certainly be a another "backs to the wall" scenario with the squad down to the very bare bones through injuries and suspension.  Hope the gathered hordes appreciate that and get behind the team as they'll need every last decibel of support to help them through.

Interesting to see how Killa and Bradders are doing in their new surroundings?  Brizzle are struggling at the bottom of the embryonic table shipping goals for fun whilst Bradders warmed the bench as the Canaries started their Premier League adventure.  In a funny way they are the benchmark for me in assessing any improvement from last year.  Clayton in for Killa, on the evidence of the first two games a definite benefit.  Brown in for Bradders probably weakened the team up to now. Keogh for Billy Barndoor????

Come on Leeds let's have a win against Hull.  Travelling to the 'Ammers without a win will be a daunting prospect I wouldn't want to entertain. I can feel a stirring performance under the Elland Road floodlights coming on...................
Can't wait!
MOT

Posted by Andrew Butterwick at 20:13