I think Boxing Day should be renamed as "Blow the cobwebs away and try and mitigate for yesterday's massive over indulgence" Day. With that in mind a trip to watch a Football match fits the bill perfectly. So with a bag full of "leftover" Honey glazed ham sandwiches and a large dose of hope I set off for the trip south to Pride Park to see if the mighty whites could lift the gathering gloom of recent performances and beat Nigel Clough's struggling Derby side.  The Happy Chocker, Big Steve & Fabienne were my companions as we sped down the M1.  One thing we were all agreed on was that if we were going to win this festive encounter a significant improvement on the last two performances was badly needed. 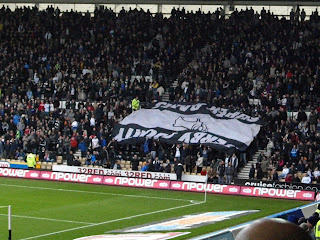 Lord Larry's team news revealed a return for Darren O'Dea in the centre of the defence and a move to right back for Tom Lees leaving Connolly stranded on the bench.  Now I am a big fan of Tom Lees but right back is not his best position so the selection did create quite a bit of pre match discussion.  "Connolly's not done much to warrant dropping" Big Steve queried.  "Lees is never a right back" one of the 4,000 plus "managers" who had followed the team down the M1 stated.  What ever the reason for the change it had better work because patience was as thin as a bulimic supermodel on hunger strike amongst the Leeds faithful after the last two performances.  Becchio kept his place up front despite too many recent indifferent showings.  Pride Park was rammed to the rafters with a capacity crowd all anticipating a cracking game.  The pre match atmosphere was lifted as the two sets of fans traded songs.  "You don't know what you're doing" the Leeds fans teased their hosts as the large Derby banner made it's way upside down along the main stand. 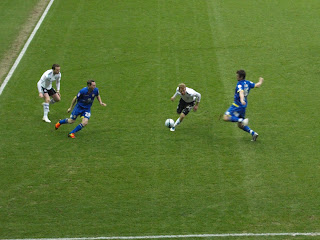 Leeds started brightly enough with Aidey White pouncing an an early slip by a Derby player to sprint away and force a corner. Lees tried a shot from the resultant corner.  Things were looking good and when Snoddy thundered a stinging free kick which Fielding tipped over after 10 minutes I started to think maybe today was the day we ended our awful recent form against the Rams.  Jamie Ward was enjoying himself on the Derby left wing though.  Maybe something to do with the acres of space Lees and his team mates allowed him to build up steam before attacking the jittery visiting defence.  On twenty minutes Ross Mac reminded everyone just why he shot to the top of the goal scoring charts earlier in the season as he hit a sweet, swerving shot from 30 yards that saw Fielding happy to scramble the ball away.  Leeds' inability to keep possession of the ball for longer than 3 or 4 passes was starting to hurt them though.  Jamie Ward weaved through the Leeds defence and clattered the post with an intelligent shot as Derby began to get the better of the scrappy midfield battle.  Leeds resorted to the safety first "hoof" up the field at any sign of pressure from the Rams as their performance deteriorated.  The usually noisy travelling army of fans grew quieter the nearer we got to half time as Leeds lacked direction, confidence and skill on the pitch.  Lees was replaced by Connolly after a clash of heads just before half time.  The HT whistle went with 0.0 written all over a scrappy game.

There wasn't much festive cheer during the interval as I reflected on an ineffective midfield with both Ross Mac and Becchio labouring with the scraps of service they were getting.  Oh how we are missing Jonny Howson I pondered.  Once again the only spark of creativity was coming from Snoddy and he can't do it all by himself. 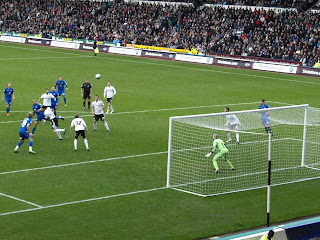 The 2nd half followed a similar pattern to the first 45 minutes as the referee's whistle and the long ball in the air saw far too much action to enable a free flowing game.  Leeds were huffing and puffing but time and again moves broke down with the ball given up far too easily.  When we did pressurise the home defence they looked shaky but the only real shot that raised any expectations amongst the Leeds fans was by Pugh on 60 minutes as he hit a screamer that Fielding parried away.  Derby then took the lead.  Clayton gave the ball away in midfield leaving the defence exposed as Derby attacked.  Lonergan saved Ward's first effort but couldn't do anything about the follow up as the ex-Sheff Utd got the all important first goal.  The vast majority of the 33,000 crowd danced with delight whilst the Leeds faithful stood in resigned silence.  We never do well on Boxing day and we never do well against Derby I mused.

Keogh and then Nunez replaced Becchio and White respectively as Leeds tried to rescue a point.  The Derby defence creaked but Leeds never quite had the class to finish off any of the chances although Fielding pulled off a stunning save in the 91st minute from a Kissy header to ensure Derby took all three points. The referee's whistle ended the game as Leeds slumped to a second straight defeat.  Worryingly it was the manner of the defeat that stuck in the gullet for me.  Leeds didn't play with any confidence or skill and whilst there was lots of endeavour far too often players gave the ball away at the slightest bit of pressure applied by the grateful Derby team.  Clayton was poor in the centre of the midfield whilst Becchio was totally ineffective against the tall Derby centre backs.  Leeds look like a team devoid of ideas, direction and quite frankly passion today.  Not something that fills even their most optimistic fan with hope as we enter the new year.

A Derby fan gushed that we Leeds fans must be gutted as we caught Derby on "their best day of the season by far"  "Well with all due respect you must have been shite all season if that's the case" I countered. "Suppose we have" he accepted emphasising the fact that this was another massive opportunity to gain three winnable points thrown away.  These are dark days on Planet Leeds.  The team are playing with little confidence or skill and on the evidence of the last three games we have hit relegation form just at the wrong time.  Lord Larry is under pressure and his post match comments suggesting we had played well and been unlucky not to get at least one point will not have pacified the growing number of fans who think he has lost his way.  The transfer window is critical for Leeds' season.  We need two or three players in to strengthen the squad at least.  I just wonder if Capt Birdseye will change the man at the helm before the dealings begin?  It wouldn't surprise me if he did.

Barnsley at Oakwell on New Year's Eve next.  Not a fixture I am looking forward to with Leeds in this form. Have we found our true level after over achieving in the earlier part of the season?  I hope not and what better place than Oakwell to show that's not the case and take the Whippet loving upstarts down a peg or two? I live in hope.
Can't wait.
MOT.

Posted by Andrew Butterwick at 23:41