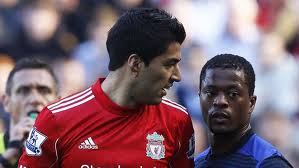 The Xmas festivities are almost upon us but there seems to be little goodwill to all men on Planet Football this week.  First Mr Suarez received a staggering 8 match ban from the FA for verbally abusing Patrice Evra during a game. Now before I get a torrent of abuse myself the actual charge was for racially abusing Evra but am I the only one who is struggling to see the massive difference between calling another player a "fucking useless cunt" or using the same venom but replacing the word "cunt" with any word with racial connotations?  Was Evra the only Salford Yanks player Suarez engaged in verbal warfare that afternoon? No..............and was the reason Suarez was spitting vile at Evra because he was black? No..............it was because he wanted to wind him up and put him off his game, as did every other individual during that match to their immediate opponent. To me this wasn't a racially motivated attack more a player who has a very high opinion of himself and has a history of whinging and moaning when things aren't going his way using the race card to stir up trouble.

Next there's the John Terry case.  He has now been charged with a criminal offence, racially aggravated public order offence, for comments he made to Anton Ferdinand during the Premier League clash at Loftus Road. Lawyers and solicitors must be rubbing their hands at this one.  Where will it all end?

There is no place for racism in Football or any other walk of life but let's get things in perspective.  Racism is when discrimination occurs solely due to the colour of your skin or ethnicity and these cases will do nothing to help eradicate racial prejudice from Football just the opposite in my opinion.  There is a saying "Sticks and stones may hurt my bones but names will never hurt me"  Call me old fashioned but shouldn't footballers be playing to those rules instead of instructing their lawyers when someone upsets them at a particularly bad day at the office? 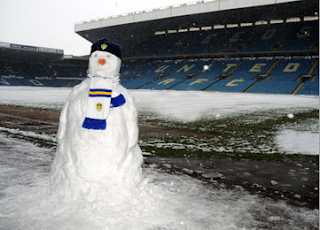 On a lighter note Leeds have been linked with American Robbie Rogers this week.  The USA international  is reported to be a midfielder who "impressed Grayson in a recent trial at Leeds"  His record with Columbus Crew in the MSL is not sparkling, 2 goals and 7 assists from 28 starts this term although he is a current USA international.  The need for strengthening the midfield is blindingly obvious but I am hoping that the targets Lord Larry has referred to recently have at least some track record in the English game. For anyone joining Leeds in January the need to hit the ground running is essential if they are going to make an impact on the hoped for promotion run in.  With all due respect to Robbie "Roy" Rogers the step from the MLS to the Championship is a big one and for someone who failed in their last European venture at Heerenveen in the Dutch League the signs are not good.  Other names that have been muted as possibles on Lord Larry's list include Keith Andrews, currently on loan at Ipswich where he has netted an impressive 9 goals from 19 starts from midfield, Stephen Dawson the Orient captain, a defensive midfielder with spells at Bury and Mansfield on his CV.  If all this is true then we are still scratting around in Aldi's discount section to supplement our promotion challenge.  Things might change if we cash in an under performing Becchio and use that money to have a look at Tesco's finest range for a midfielder?  Well there's no harm in hoping.

Xmas is a time of hope and looking to the future.  Wonder what the future will look like on Planet Leeds in the New Year?  We are 3 points worse off than this time last year when we sat precariously in 2nd spot going into Xmas. 3 draws over Xmas and then a defeat at Cardiff in the new year deflated our promotion expectations after which we never really recovered.  Could Xmas be kind to us this time round? Were the Watford and Reading performances a mid winter blip or signs of a bleak mid winter?  Time will tell but in the mean time.........in the words of Bing Crosby...........I'm Dreaming of a White Christmas............
Can't wait.
MOT
Posted by Andrew Butterwick at 18:02

I understand where you are comeing from but yes there is a world of difference between a commonly used swear word and and a racially abusive comment.The common defence for this is we have always took the mick outta scots ,irish,welsh ect fat ,ginger whatever but these are not races and where never subjected to slavery,There should be zero tolerance in the u.k i was proud of the verdict as it shows the world what we are about.There is still a lot to do,you will see anti muslim comments on a lot of forums still to this day but we have eradicated monkey chants unlike a lot of other countries.

Thanks for your comment Kevin. Agree there should be zero tolerance and there is still a racial undercurrent on many forums but still struggle with the proportion of the severity of the response to both cases.
MOT