With Xmas just around the corner that can mean only one thing on Planet Leeds...............no not Turkey, stuffing, sprouts, Roasties, too much Xmas pud and falling asleep in front of "It's a Wonderful Life" nope its not that...............it's transfer window speculation time!  News coming out of the Theatre of Hope this week that "one or two players will have to go to free up a bit of money to bring players in" will not sit well with the majority of fans who will be wanting positive moves in January to strengthen the squad for a new year assault on promotion to the money grabbing league.  Financial prudence is certainly needed in running a football club in these days of sky high player's salaries as Leeds know only too well the consequences of living the dream on none existent and unsustainable financial resources.  That still doesn't stop numerous clubs running up huge debts in the pursuit of short term glory at the risk of potential football oblivion when it all goes pear shaped.  Forest, Bristol City, Sheff Utd and Preston North End to name but a few are currently staring  into the financial abyss and continue to rack up eye watering debts whilst clubs such as Pompey seem to be in a constant state of insolvency.  Leeds United so nearly disappeared without trace................. and I fear at least one relatively large club will go bust in the current climate over the next 18 months.  That would be a shock to the Football system and would be devastating to the fans of whichever club were involved but it is an inevitable consequence of any club continually spending more money than they have revenue coming in. 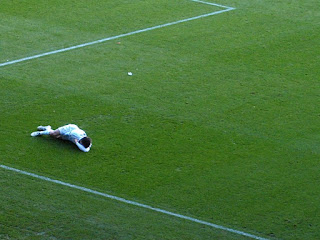 So where does that leave the mighty whites?  We do need to strengthen in the January window especially with Jonny Howson's injury now likely to keep him out for 3 months.  Will Lord Larry be able to generate enough cash from off loading some of the deadwood in the squad and whatever he has left in his transfer kitty to secure the targets he has lined up?  If previous experience is anything to go by probably not.  Danny Pugh and Andy Keogh are likely to covert their loan deals into permanent deals whilst McCarthy's loan deal will extend past the original December deadline.  I doubt we would have enough money to secure the services of such a highly rated keeper though?  So let the transfer speculation games begin and get ready for all the usual rumours to start all over again............did I tell you I saw Alan Smith in McDonalds on Elland Road this week?

Speaking of bumping into footballers...........this time for real.........a footnote to my chance meeting with Mario Balotelli on the way back from the Watford game at the M1 services.  I couldn't understand why he would be heading back north when City were in London to play Chelsea until I read in the Manchester Evening News that he'd been fined for breaking curfew and having a night out in Manchester when he should have been tucked up in bed in a sleepy Hertfordshire hotel with the rest of his team mates!

Reading are the visitors to LS11 this week with the ex Leeds favourite, Ian Harte, still rolling back the years and turning in good performances for the Royals.  They showed last week against the Hammers that they can still mix it with the best despite losing their star striker, Shane Long, over the summer.  After last weeks dour showing at Watford where we escaped with a point I'm hoping the mighty whites can raise their game and overthrow the Royals.  That would just do nicely as an early Xmas present don't you think?  I'm going for a 2.0 win to Leeds..............seat belts on though Xmas usually has it's fair share of turburlence on Planet Leeds!
Can't wait.
MOT


Posted by Andrew Butterwick at 21:45