A bright, crisp morning greeted the Happy Chocker, Quiet One and myself as I gunned the faithful Scirocco southwards for our clash with mighty Watford. Could Leeds keep their impressive away form going against the struggling Hertfordshire team?  Who would Lord Larry pick in midfield? Will Lonnergan return in goal?  These were all questions that needed serious debate as we ate up the miles down the M1.  The strangely named Wetherspoons pub, Moon under Water, in the centre of Watford provided excellent facilities for pre match refreshments as I eagerly demolished a fantastic All Day Breakfast washed down with some disappointing southern beer.

Once in the ground news that Lonnergan would be on the bench and Keogh and Becchio would start up front spread around the smattering of Leeds fans taking up their positions early.  Andy Lonnergan was warming up in front of us so I asked him how his finger was.  "Sore, very sore" was the worrying reply......"I've only trained three times but I've got to give it a go in readiness for next week" he shared with me.  In some ways I wish I'd never asked!  The midfield pairing of Pugh and Clayton meant the successful 4.5.1 formation of the last couple of games was ditched, presumably due to Howson's absence?  We do need to strengthen that area in the January window.  The precarious press gantry near the ramshackle combination of rickety stand, unused terracing and changing rooms looked a very cold place to commentate on a football match as the sun disappeared and the chill southern air tested the resolve of those fans who had bravely come in just a replica shirt.

2,000 Leeds fans had made the trip and they were in moderate voice as the game kicked off.  Memories of last years dour aerial  battle came flooding back as both teams chose the safety first approach during the first 15 minutes.  Watford had the best of the opening exchanges as they appeared quicker to the second ball.  Clayton and Pugh struggled to make any impression in midfield.  Snoddy and Sam did look lively on the flanks and it was the Scotsman who had the first half chance as he cut inside only to have a shot blocked on the edge of the box. Moments later Lees was inches away from a corner that had he connected would have opened the scoring and won me a substantial amount of money as I had backed him at 40/1 to score the first goal.  Play was disjointed though.  Nobody could get their foot on the ball and exert any sign of influence on the game.  As a consequence the ball seemed to bounce from one head to another in frustrating bouts of head tennis.  This was not by any means a classic!

On half an hour the deadlock was broken as Leeds lost the ball far too easily in the centre circle and Keogh's ex team mate Kightly broke ominously and ran unchallenged until he got to the edge of the box where he jinked and sent a superb curling shot past McCarthy in the Leeds goal. 1.0 Watford and on the balance of play probably just about deserved.  The goal slightly kicked Leeds into life in what had been a very flat first half.  The home keeper came for a cross and hopelessly misjudged it.  He tried to make amends by chasing Snoddy to tackle him.  Snoddy side stepped him in the box but then lobbed the ball onto the top of the net.  Bummer!   Lloyd Sam nearly brightened up the half time team talk as he barnstormed into the box only to blast the ball into the Watford kop right on the stroke of half time.  The Leeds first half performance had done nothing to warm the freezing fans who had made the long trip south.

The referee changed the ball at half time as the one used in the first half was suffering from altitude sickness.   Could Leeds get a grip on the game and get the ball on the deck and play?  Errr no.  The game descended into a heading contest between the two sets of defenders as far too many many players tried to copy Peter Kay's impression of Football in the old John Smiths advert..."Ave it"  The few times Leeds did get the ball down the home defence looked jittery and on one of these occasions Becchio wasted the first of three chances he would get as he screwed a left foot shot horribly wide with the gaping goal enticingly vulnerable.  At the other end the highly rated Sordell was not impressing the Leeds hordes as he made little impact on the visiting defence and the chance he did get he ballooned into the kop.  The game meandered along with the ball still taking the high road every time either team was under pressure.  Why doesn't someone put their foot on the ball?

On the hour Lord Larry removed the ineffective Keogh and brought on Ross Mac together with Vayrynen replacing Sam as White moved onto the flank and Pugh dropped in at full back.  Surely Leeds would mount an assault on the Hornets goal now?  Errr No!  The game was slipping through Leeds' careless hands.  The game entered the final ten minutes in a whimper instead of a cavalry charge as I became resigned to the fact we were going to lose the game and the three precious points.  On 90 minutes Kissy gave away a soft penalty and I sank to my seat in despair.  This was the poorest performance of the season including Blackpool at home.  Suddenly my spirits were lifted though as Sordell ponced about and missed the penalty as McCarthy appeared to get a touch on the ball and it rebounded off the post.  Leeds still didn't look like scoring though until the very last attack of the match.  A ball was swung into the Watford box and their defence panicked....the ball bounced on the edge of the box and the industrious Vayrynen controlled the ball with his head as a Watford boot tried to decapitate him.....PENALTY.....unbelievable Jeff!  Worryingly Becchio was hovering around the spot to take the kick.  No not after his three mis-hits, please no?  Thankfully Snoddy stepped up and broke the hearts of the home team and fans with a sweetly struck conversion.  1.1.  The referee immediately blew for time as Leeds snatched the most unlikely of points.  Not that Watford deserved to win.  I don't think either team deserved anything from a game that will go down in my memory as Poor with a capital P. 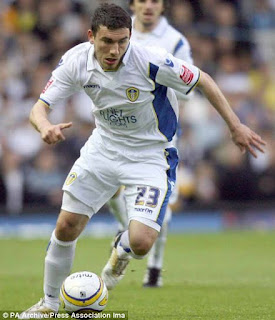 The chatter amongst both sets of fans streaming away from the ground was of a similar tone.  Leeds were lucky to get a point.............it wasn't a good game..............but apparently that was the best Watford had played this year!  If it was I suggest their fans start looking up the best route to Rochdale, Walsall and Stevenage ready for next year.  Nobody in a Leeds shirt enhanced their reputation although Becchio worked hard and Snoddy was coolness personified in slotting home the penalty.

The journey home was brightened by a Salford Yanks fan bemoaning his club's current misfortunes on 606, Barnsley's horrendous defeat to Ipswich and a surreal meeting with none other than Mario Ballotelli as he filled his posh car up next to mine at the M1 services.  I smiled and waved at him which he charmingly responded. Amazing who you meet on away days!

As a KFC tea was hungrily consumed in the car breaking news flashed on the Radio.....Simon Grayson, Manager of Leeds Utd, has been arrested and charged with daylight robbery by the Herts Police after today's game at Watford...................The Quiet One and HC chuckled as we made our weary way home.  Reading are next up at the Theatre of Hope on Saturday and after their three goal demolition of the Hammers they will be on a high.  Lord Larry has some thinking to do before then as to what formation he's going to play.  Today was a bad day at the office for Leeds but they still pinched a point to keep them in the play off spots.  Not for the first time this season we've secured points late in the game.  Now all we need to do is get some consistency into our play and we will be fine...........Somehow I think I've said that before?

Posted by Andrew Butterwick at 21:30