After last week's emotional games it's back to normality tomorrow with the trip to Watford as Leeds try to cement a firm place in the promotion picture ready for the forthcoming festive games.  Injuries to Howson and Brown will make selection of the midfield interesting with a number of possibilities floating around.  Will Vayrynen get a start in the defensive holding role or will Pugh swap from full back?  Who will get Howson's attacking role? Nunez or even Snoddy? Or will Ross Mac come back in from his brief spell in the cold and play  the deep lying centre forward role? I would have Pugh and Ross Mac in those roles assisted by Clayton leaving Snoddy and Sam on the flanks with White at full back.  That would certainly be an exciting attacking option to put out against a team struggling near the wrong end of the table.  The other selection issue is whether McCarthy keeps the goalie's shirt for his last game before his scheduled return to Reading or does Lonners regain his place after recovering from his broken finger? McCarthy has been a godsend during Lonergan's absence and I'm sure he is destined for good things in the future if his display's for Leeds have been anything to go by.

Once again the 3rd round FA Cup draw treated the mighty whites well giving us a return trip to the Emirates to play Wenger's nearly men.  The initial excitement was somewhat dampened though the following day when it was announced that the game would take place on Monday night to please the TV gods.  An FA Cup game on a Monday night? It's just not right.  FA Cup 3rd round games should all be played on a Saturday afternoon at 3pm with flurries of snow and rain swirling round supported by a biting wind and John Motson in his dated Sheepskin coat doing his piece to camera whilst shivering his nuts off.  That's proper Football! 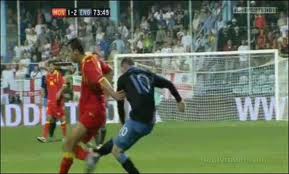 So in a week when both Mancunian teams decided they wanted to play on Thursday's in the forseeable European future and something called the Eurozone is steadily disintegrating before our very eyes our great leaders from the FA marched on FIFA HQ in Geneva to right a despicable wrong brought upon English football by Jonny Foreigner, the suspension of England's finest footballer, Mr Potato Head himself Wayne Rooney.  For those with short memories I'll just remind you of the circumstances of Potato Head's outrageous 3 match suspension.  After much grunting, groaning, whinging and whining in the final Euro qualifier Potato Head was tackled once too many times by an unsporting Montenegro player so he decided to do what comes naturally to a spoilt kid with an IQ that matches his shirt number................he lashed out and kicked the devious Montenegran from behind.  Now the referee, who was also a foreigner, gave Potato Head a red card claiming he had committed an act of violent conduct! So the FA who clearly are committed to fair play and creating role models for the youngsters of England  in effect condoned Rooney's childish act of thuggery and appealed against his suspension!  What amazed me was they actually got the ban reduced.  I mean in which version of the football rules was his kick not violent conduct?  Once again the FA proved they know FA when it comes to ethics and football morals and are only interested in their own self importance.

An early start for the drive down to the Hornets nest in prospect.  If our recent away form is anything to go by we should easily harvest another three points to deposit in the promotion vault.............but then again when have Leeds done anything easy?  Another cracking performance from the team that glow in the dark and a 2.0 win says the crystal ball. Guess what?
Can't wait.
MOT

Posted by Andrew Butterwick at 20:31