The wind of change blows through the Theatre of Hope!

The wind of change has been blowing like a gale through the Theatre of Hope this week as Colin seeks to stamp his indelible mark on the mighty whites.  Firstly the his press conferences are full of brutal and open honesty about the state of the team and the squad.  His initial assessment of the state of affairs at Leeds will undoubtedly have ruffled a few feathers in the dressing room,  "We lack leaders on the pitch" will have been music to the ears of the majority of fans though, especially those urinal philosophers who participate in the HT gents debate. "Simple things need changing on the pitch" & "we need to get better at what we do" are simple words that have flowed from Colin's mouth this week but they will immediately strike a chord with many a loyal Leeds fan who manages from the stands every week.  His style is very different to Larry's and is just what the doctor ordered for what had become a lame duck team.  Interestingly the last two loan players have departed LS11 today as Townsend moves on to Brum, apparently upset at been left on the bench, and Smith back to Spurs.  Mmmm a bit of advice for young Townsend...........maybe if you analysed why you were dropped to the bench instead of flouncing off back down south at the drop of a hat you might advance your career quicker.  I'm afraid after an initial burst of sparkle too many of Townsend's forays into enemy territory ended up with a poor final ball for my liking.

So with Colin making all the right noises whether it to the players, the fans or the media there is a new spark of optimism engulfing Planet Leeds.  Even Capt Birdseye seems to have been caught up in the "Warnock" effect and rashly announced a free shirt giveaway deal for any moron/nutter buying a junior ticket for the Saints match.  Yes I know Season ticket holders and members don't get one but then again Rome wasn't built in a day was it?  Or maybe it's not the Warnock effect maybe, just maybe, the mounting pressure from fans has finally told and he's conceded he needs to reveal his touchy feely side where his moronic customers are concerned.  One thing not many fans have noticed on the shirt offer though is the small print and in there it states "each shirt will have the words "Bates In" and the number 7 emblazoned on the back"

News that Larry has not troubled the dole office for long and has now found gainful employment at our West Yorkshire Dog bothering, tesco bag wearing neighbours will have pleased the vast majority of Leeds fans if not met with universal approval in Kirklees.  Larry is one of Football's nice guys and I wish him and his coaching staff every success in their new roles.  There's a lovely irony that our local "non" rivals are now managed by not one but two massive Leeds fans or as they refer to us as, Scum.  Delicious! 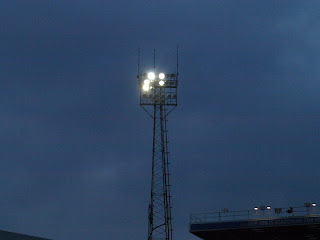 Pompey await Colin's new look and newly motivated team on Saturday at the dump that is otherwise known as Fratton Park.  With a financial hurricane engulfing the South Coast team once again a fire sale of players has already started which all bodes well for Leeds' game. It would seem that the powers that be at Pompey failed to learn the lesson of their recent trip into administration and have stumbled back down the same irresponsible road and straight into another ten point deduction....................did I say ten, surely that should have been fifteen or even more if the FA authorities understood the words consistent sanctions? But then again that would be hoping for too much!  So the Leeds hordes will be rattling with pockets full of 50p's for the electric meter at Fratton Park on Saturday.  After all we don't want the lights going out just when Colin's new team are about to record a 3.0 opening win do we?  Leeds are back and you know what............
Can't wait.
MOT
Posted by Andrew Butterwick at 22:06