A glorious blue sky and bright sunshine made for an encouraging backdrop as we headed south for our clash with Pompey.  Sunshine and blue sky always puts you in a good mood and this was no exception as the trusty Scirocco with The Happy Chocker, Quiet One and Justin on board gobbled up the miles with the Sat Nav locked onto Fratton Park, Portsmouth. The prospects of Colin's first game in charge of the mighty whites had dispelled most of the doom and gloom that had been an integral part of matchdays over the last few months.  But could he live up to all the hype?  After all he still had the same set of players minus Delph, Townsend and Smith plus rumours that Ross Mac might not make the game.  Pre match nerves began to jangle. 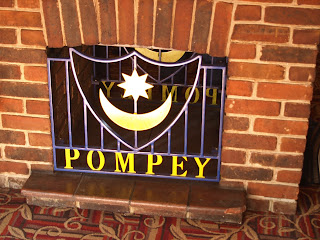 After 280 miles on the road we tumbled out of the car at Fratton station car park to walk the remaining half mile, via the Shepherds Crook pub.  With their team in administration the Pompey fans were trying to rally support for the club in the pub with numerous charity functions and appeals.  In some way the efforts of the loyal Pompey fans mirrors the rebellious, moronic Leeds fans who are also trying to save their club.  I did find it deliciously ironic that Pompey's shirt sponsors are "Jobsite" when the administrator has announced this week that they haven't enough money to last longer than 6 weeks.  Presumably the staff and players of Pompey will get free use of their sponsors service?

The eagerly awaited team news had a few surprises.  Firstly Ross Mac was on the team sheet and there was no goalie on the bench with Snoddy taking the Captain's armband.  Colin had also changed the formation to a 4.2.3.1 arrangement with Clayts and Brown sitting in front of the shaky back four comprised of Bruce, Lees, O'Dea and Pugh.  Snoddy found himself in the hole behind Becchio with Ross Mac and White outside him.  Against a big physical Pompey side and on a tight pitch Colin had certainly battened down the hatches of the notoriously leaky Leeds defence.  Fratton Park is not the biggest ground in the world but they rightly have the reputation for creating the best home atmosphere in the league and that coupled with another huge away following made for a very noisy opening.  The first rendition of "Play up Pompey" by the home fans was amended by the Leeds fans to "Pay up Pompey" as the afternoon's banter began on a high note. 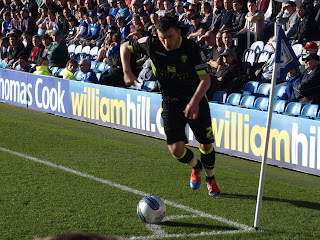 The game kicked off with the sun shining straight into our eyes.  The opening salvos were frenetic as both teams played at a high tempo something that has been lacking in the Leeds team of late.  It wasn't pretty to watch as Clayton and Brown created a protective shield in front of the back four trying to break down every Pompey move.  Lonergan needed to be alert to keep out a header and a decent shot in the first ten minutes as the home side bombarded the Leeds goal with an aerial assault of blitzkreig proportions.  Bruce departed after 11 minutes with a hamstring problem to be replaced by the forgotten man of Leeds, Bromby.  Interestingly enough O'Brien wasn't on the bench so I assume he is now 3rd choice back up centre back.

The play was scrappy and frequently interrupted by the referee's whistle which frustrated both sides. Pompey had the better of the opening half hour's play but the Leeds defence seemed to be playing with a steelier resolve as they repelled each wave of high ball attacks. Understandably the Leeds players were finding the new system of play difficult to adapt to but they stuck to their guns and gradually the pieces started to fit together in this pressing, high tempo style that Colin prefers.  Half time approached with only an Aidey White shot troubling the Pompey keeper.  The players trooped off for their half time orange to muted applause.  Leeds had kept the game tight but at the cost of any adventure in their play.  Pompey had enjoyed the better of the possession but hadn't really threatened Lonergan's goal although they had two very good shouts for a penalty turned down by the pedantic referee.

The mood amongst the Leeds crowd was cautious to grumpy as the lack of any real excitement in the game combined with the long journey created a relatively subdued atmosphere.  At least we had still got a clean sheet.  Leeds were late out for the 2nd half.  I wonder if Colin had giving his players the benefit of one of his famous rants?  If he was he would have demanded we pick up more of the 2nd balls in the 2nd half.

Leeds were now playing away from their fans but started brightly enjoying a bit of possession at last.  They stretched the home defence on one attack and the ball fell to Ross Mac on the edge of the box who hit a ferocious shot that bounced back off the bar before Capt Scot (Snoddy) headed the ball into the empty net. The linesman's flag curtailed the celebrations but surely the initial shot crossed the line didn't it?  Leeds turned up the heat on Pompey and soon the hard working Becchio got free from his marker but failed to beat the last line of defence as the ball spun away for a corner.  Pompey looked dangerous on the attack though and it needed all of Leeds' new found resilience to keep the scoresheet blank.  With 20 minutes left Lonergan made the save of the game from a belter from Thorn but why was he allowed so much space to shoot?  Looking at Colin on the sidelines doing a neat impression of a pressure cooker about to explode he had similar thoughts?  The match was tense as the last 10 minutes of the game ebbed and flowed from one end to another.  Pompey thought they had won it when a long throw from Halfords went straight into the net but the referee quite rightly disallowed it.  His whistle must have been nearly worn out by now though as he'd blown it at least twice every minute for the entire game.  Brown had a late chance for Leeds but he ballooned it over the bar into the crowd near where the annoying idiot with the Pompey chimes bell and stupid hat sits.  The game finished with Pompey pressing for the winner but to no avail.  A very unusual score of 0.0 as far as Leeds are concerned.  I didn't think we were allowed  to have them?

In the end Colin's plan to stifle the game and stiffen the Leeds back four worked although it's not conducive to high entertainment.  He did get a good reception at the end with the sounds of "there's only one Neil Warnock" ringing round Fratton Park.  He enjoyed that.

O'Dea and Lonergan were the best of the Leeds team but this isn't a game that is going to stick long in the memory.  The long drive home gave us plenty of time to reflect on the first game of the Warnock era.  His tactics are clear, keep it tight and hit teams on the break.  Clearly he still has a few square pegs in round holes at the moment but with rumours of Matt Mills coming to Leeds and more time to perfect the Warnock style things are looking bright for Leeds.  A tough run of games coming up though with Saints, Hull and Boro on the horizon.  We will certainly have a good idea after those battles if Colin's credentials as a great general hold water.  Interesting times ahead me thinks?
Can't wait.
MOT


Posted by Andrew Butterwick at 00:11