Bates and Harvey plumb the depths........again. 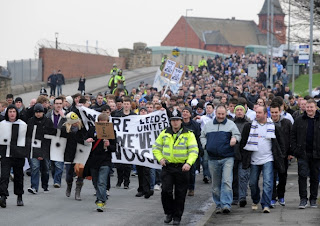 So I'm driving home from work after a long hard week and I can't believe what I'm hearing on Radio Leeds.  The top dog at the Leeds United Supporters Trust (LUST) is explaining how his account with LUFC has been blocked preventing him buying any more match tickets! The reporter then incredulously reveals that Shaun Harvey has responded to the incident by stating that LUFC retain the right to sell tickets to who they want.  So let me get this right...................if customers of Leeds United dare to complain or question in the slightest the way the club is being run then they are in effect banned?  Absolutely unbelievable.  I just wonder who Mr Bates models his approach to customer relations on?  I don't know for sure but at the risk of paraphrasing a certain Brian Clough.................I bet Joseph Stalin is in the top one.  I await with baited breath for the reaction from the Football authorities.  After all they have deemed that the Monaco Maniac had passed the "fit & proper" test for Football club owners so he must be ok! 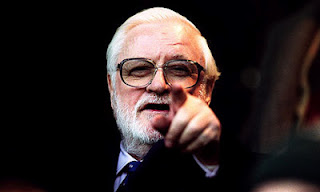 Saturday's game against the Saints is the start of a run of fixtures that were always going to be a severe test of Leeds credentials as promotion hopefuls even before our traditional mid season slump in form.  I suspect not even Colin's magic "new manager" dust will protect us from some heavy collateral damage in the games against Saints, Codheads, Boro and then West Ham. If we do get through these four unbeaten then Mr Warnock really will be seen as a miracle worker and hopes will rise of a late season charge by the mighty whites.  The Saints game will be a tough one.  In the opening game of the season we were shown a footballing lesson by Nigel Adkin's classy team and they have not looked back since.  They sit proudly on top of the table and in Ricky Lambert have a real match winner who will give the Leeds defence a test of seismic proportions on Saturday teatime.  Such a shame we weren't able to secure a certain Matt Mills to strengthen Colin's backline.  After saying that I do fancy Leeds to pinch a win.  No logic just gut feel but a 2.1 Leeds victory is in the offing.

Elsewhere in football I'd love to know what's going on in League One?  It seems that any team who gets into the play off positions sack their manager.  First Dean Hoyle dispensed of Lee Clark's services with the Tesco Bags handily placed to challenge for automatic promotion then Milan Mandaric sacks the Ginger Mouriniho, Gary Megson, after his team win the Steel City derby to cement their place in the play off positions.  Football has gone stark raving mad.

Talking of the Tesco bags it was good to see Simon Grayson get back into football management quickly but I had to smile at his post match interview after his new team gave up a 2 goal lead against mighty Stevenage in midweek.  It just sounded the same as a million ones he's given after Leeds had frustratingly capitulated to snatch defeat from the jaws of victory.  I do genuinely hope he can take them up but if he does I suspect he will have to endure the cruelty of the play off system once again. Good luck Larry.

So will we keep a clean sheet against the Saints?  Will Capt Birdseye's programme notes produce more vitriol aimed at our loyal fans?  Will my account be the next to be blocked? As ever life on Planet Leeds is anything but dull.................despite all that.............
Can't wait.
MOT

Posted by Andrew Butterwick at 21:50