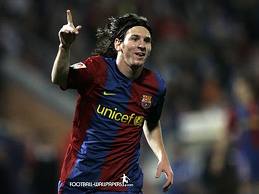 Lionel Messi set a Champions League record this week by scoring 5 goals in one match against the unfortunate German side Bayer Leverkusen. The frightening thing is he made it look so easy.  Some of his finishes were just jaw dropping and it got me thinking..............no matter how good a goal is you only score one goal.  So each of Messi's efforts on Wednesday night only gained his team the same advantage as say Enoch's effort away at Scunthorpe Utd did for Leeds when the ball found it's way into the net via some part of the big man's cumbersome frame. It's like comparing a piece of Italy's finest cheese,Parmigiano Reggiano, with a Dairylea cheese slice............they are both cheese but in terms of quality and technical expertise they are light years apart!

Elsewhere in the crazy world of Football Glasgow giants, Rangers, continue their financial meltdown.  Players are taking 75% cuts to their salaries and redundancies are inevitable as the administrator struggles to unravel the financial Armageddon that has decimated Ibrox. Not surprisingly performances on the pitch have taken a nose dive as a consequence leaving the competition for the SPL title dead in the water for this season.  The implications for Scottish football could be severe.  If Rangers do survive but are not competitive in next year's competition Celtic could have the title all wrapped up before the end of January.  These are dark days for our haggis munching cousins north of the border.

Planet Leeds has continued to enjoy a positive atmosphere this week after the goalless draw at the KC as the team prepare for this weekend's trip to the Riverside to play Middlesbrough.  Memories of Becchio's stunning winner on Teeside last season will give encouragement to the Leeds faithful that we can repeat the victory on Sunday lunchtime.  Boro's form away from the Riverside has been far more impressive than at home suggesting that Tony Mowbray's men are not all that comfortable playing in front of their own fans, a fact that Leeds can exploit especially if we can stop them playing for the first 20 minutes.  I hope the pitch is better than the KC though.  The combination of a rugby damaged surface and a very firm pitch hardly encouraged players to keep the ball on the deck and led to lots of aerial traffic..........not that easy on the eye.

So can Leeds make Boro look like Yorkshire puddings on Sunday lunchtime and take three points back to the Theatre of Renewed Hope?  Yes.........course they can. 2.1 to Leeds me thinks!
Can't wait.
MOT

Posted by Andrew Butterwick at 09:55