Glorious sunshine enveloped the broad acres of Yorkshire as we headed north for our Sunday lunchtime meeting with the reject Yorkshiremen from Middlesbrough.  Big Steve was the driver with HC away on a golfing holiday in Spain. This was going to be a tough challenge despite Boro's less than consistent home form they were still sitting pretty in 4th position firmly rooted in the coveted play off positions. Warnock's Leeds are a very different team to Lord Larry's Leeds though.  They might be more or less the same personnel but there has been a seismic change in attitude, organisation and tactics since "Colin" arrived.  Would this be enough to prise three precious points away from the Riverside? We were about to find out.

Smoke from a fire at a waste recycling plant near to the ground was drifting ominously near the stadium as we made our way to the away end.  Another large and vociferous army of mighty whites fans had made the trip and were in good voice before the game.  A minutes applause for the soldiers from the Yorkshire Regiment who were killed in Afghanistan preceded the kick off.  Paul Robinson made his debut at left back at the expense of Danny Pugh.  A healthy crowd of just over 21,000 had forsaken their Roast Beef and Yorkshire puds to watch the game. 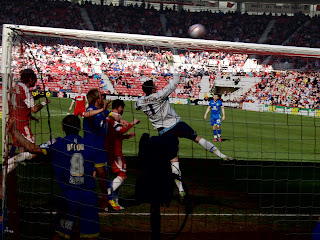 Leeds started the better of the two teams with Boro looking nervous and edgy in the first 10 minutes.  Once again Leeds had deployed Brown and Clayton in front of the back four with White, Snoddy & Ross Mac playing just behind Becchio. The high tempo of the Leeds game unsettled the home side. Snoddy fizzed a free kick over the bar and Ross Mac should have done better with a good chance from the edge of the box.  Leeds were looking good and continued to have the better of the game.  On 17 minutes Boro's woeful record against Leeds at the Riverside took a familiar turn.  Aidey White harried and won the ball back on the left before rolling a perfect ball to Snoddy who slotted the ball under the embarrassed Steele's body in the Boro goal. 1.0 Leeds.  Get innnnnnnnnnnnnnnnnn. The good news was soon winging it's way via text to a golf course in Spain where HC was waiting cautiously for news of the game. 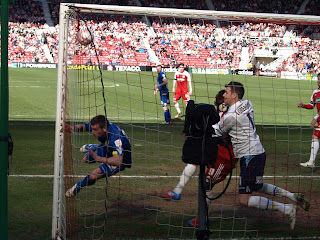 Mr Warnock's tactics were working a treat and before the half hour we were 2 goals to the good as Ross Mac took advantage of some schoolboy defending to set up Luciano with the easiest of chances that he greedily accepted.  "Boro 0.2 Leeds 27 minutes" screamed the next text to Spain. Sweet!  Stung by the two goals Boro responded with pressure on the Leeds goal.  Lonergan punched away a stinging goalbound shot for a corner and then Robinson somehow performed miracles to head the viciously inswinging corner out of the goal.  "Ahhh that's why he's come to the Theatre of Renewed Hope" I mused.  Robinson wasn't the only one putting his body on the line though. Every attempted shot by the men in red was met with at least one man in blue hurling himself kamikaze style at the ball.  This was stirring stuff by Leeds. 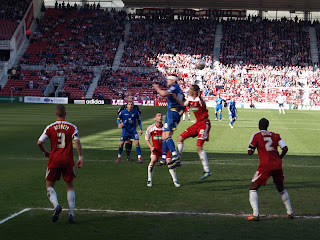 Marvin Emnes, who caused so much panic in the game at Elland Road, was well shackled by the Leeds defence this time.  With his Bob Marley like hair do flowing behind him he jinked and turned to try and find a way through the resolute Leeds defence but each time he was snuffed out by some uncompromising tackles.  Boro should have pulled one back though but a tame header from 8 yards landed straight in Lonergan's arms. You could sense Boro's spirits dropping as the game headed for half time as Leeds looked to get a killer third goal.  Aidey White wasted a golden opportunity before Ross Mac spurned another decent chance.  Mr Warnock's team were certainly "bonding" with the fans.  A chorus of "You're not Colin any more" drifted up from the away end.  The half time whistle signalled the end to the best 45 minutes of controlled football seen by Leeds this season.  Could they keep it up in the 2nd half though?

Even the hard to please Leeds fans were happy with this performance.  The only slight grumble was that we should have been further in front............and this against a team sat 4th in the table.  Mint!  Within two minutes of the restart Snoddy should have finished the Teesiders off as he latched onto a ball in the box but drilled the ball into the side netting.  Boro were looking more lively though and tested the Leeds defence but with Lees, O'Dea and Robinson all looking commanding in front of the assured Lonergan Boro rarely looked like pulling a goal back.  Gone was the sickening feeling in the pit of my stomach when teams applied pressure that was such a pain in the earlier part of the season.  As each of the 2nd period's 45 minutes ticked by the likelihood of another clean sheet grew.  This was good to watch and when Leeds got the ball they looked like adding to their two first half goals.  Ross Mac escaped the labouring home backline but couldn't beat the keeper.  Clayton rattled a shot into the crowd who then kept the ball much to the annoyance of the Boro goalie Steele.  This was turning into a Sunday afternoon stroll for the West Yorkshire team. 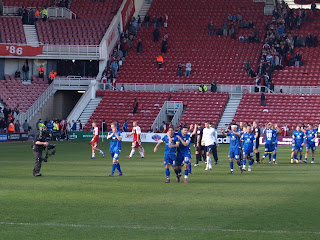 Clayton nearly decapitated Thomson as he challenged for a bouncing ball resulting in a long stoppage. Leeds were closing the game out well though and their cause was helped no end when Robson got himself sent off with 5 minutes to go for a petty kick out at Clayton.  7 minutes added time gave Boro time to miss another chance as Lonergan fumbled a shot but this was always going to be Leeds' day.  The final whistle sounded to mark a fine 2.0 win for Warnock's men. A lusty chorus of MOT reverberated around the Riverside and a text to Spain raised a cheer on some far flung golf course that will be forever Leeds!  It might not be too late to stage a late play off push after all?  On this evidence Leeds have suddenly found a formula that makes them a very hard team to beat and with their undoubted fire power up front that is a potent mixture.  Brown and O'Dea were the stand out players for me vying for the MOM award with the impressive Robinson not far behind.  Now how many Leeds fans would have thought you'd hear the names Brown and O'Dea in the same sentence as "man of the match" after some of their earlier performances?

There was trouble outside the ground after the game as fans clashed but it was soon dispersed by the police not before I nearly got some CS spray in my face though as one over zealous copper threatened to spray us all as we waited to be released from behind the fences they had erected to keep us in.  A bit of an unsavoury end to the day but the journey back south was filled with optimism.  Just 4 points off the play off's with 10 games to go.  Surely a bridge too far isn't it? Maybe not with Saint Neil in charge and the new found purpose and direction?  Dafter things have happened.

A faltering Hammers side who were booed off at home on Saturday are due next at the Theatre of Renewed Hope. Somehow I doubt they will be relishing a visit to LS11 to meet Warnocks warriors.........especially with a 30,000 crowd baying for some cockney blood!  Sounds delicious.
Can't wait.
MOT

Posted by Andrew Butterwick at 18:08