It's almost four years since goals from Andy Hughes and Jesus Prutton earned the mighty whites their last win in Millwall's Lions den.  Since then our trips to South Bermondsey have not been happy ones as the raging bear pit atmosphere generated by the home fans always seems to get to the Leeds teams Lord Larry and Gary Mac sent into battle. Typical of these games was the 3.1 reverse in 2009 when a young Aidey White was handed the left back role by Gary Mac only to be mauled by the verbal bile coming from the main stand and also the experienced Neil Harris on the pitch. The Lion's den is not the place for the faint hearted.

So today's clash with a Millwall team who's form has been up and down this season will be intriguing.  In Neil Warnock Leeds now have a gnarled street fighter at the helm and his performance in the technical area in front of the baying Sarf Londoners will be worth the entrance money alone! Rumours of wholesale changes for today's game after Tuesday's aberration against Forest will be wide of the mark I think for the simple fact that Saint Neil hasn't got that many options to change.  Maybe Andy O'Brien & Robbie Rogers will come into the squad but after that I would struggle to see who else would add value to a team short on true quality, Snoddy being the exception to the rule. 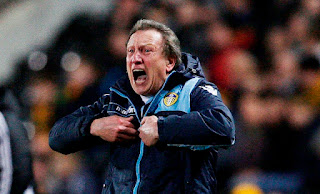 The most frustrating thing about Tuesday's capitulation to the Forest fire were the results of the teams above us leaving Leeds still only 6 points shy of the play offs with eight games to go.  The psychological damage to the team and the fans though from that defeat cuts much deeper banishing any fanciful talk of promotion to the realms of eleventy pint pre match banter!  No for the first time in a long time Leeds will sail serenely into the choppy waters of the season run in with their minds on next season rather than promotion or relegation.  This April we will need deckchairs not seat belts as the League season reaches it's climax.

So can we complete a smash and grab raid on Kenny Jacket's manor?  Will gnarled Neil's warriors smash South Bermondsey's top firm?  Four years is a long time to wait but my battered crystal ball is clearing to show another 2.0 victory for the mighty whites.  Memories of Hughesey's dancing comes flooding back.  Bring it on!
Can't wait.
MOT


Posted by Andrew Butterwick at 08:23