So "Travels of a Leeds Fan" has been banned in the Peoples Republic of China.  Bizarre I know but true as blog reader, Gary Grieve, confirmed after returning from his trip to the Orient with the news that my musings are deemed unsuitable in the land of a billion takeaways. The mind boggles as to why my weekly thoughts and ramblings on the mighty whites have somehow upset the thought police in China?  Is Capt Birdseye a national hero over there? Or maybe the Codheads is the name of a highly acclaimed national dance company in Beijing?  Or possibly the phrase "Salford Yanks" has obscene implications in the far east?  Come to think of it it does here in more ways than one!  What ever it was I now appear to be a Chinese dissident aswell as a slightly obsessive fan of the mighty whites! 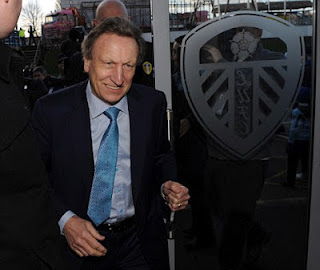 Back on Planet Leeds the mood of optimism is rising by the day.  Tickets for the clash with the Hammers are selling like hot cakes fuelled my Saint Neil's finely tuned press statements praising the fans and imploring them to fill the Theatre of Renewed Hope and rock the old stadium to the rafters when Alf Garnett's favourites roll into town.  So is the optimism justified?  Three clean sheets out of four games is definitely uncharted territory for Leeds Utd but it is the foundation of the new belief in the team.  Any team that discovers the knack of keeping the ball out of their own net is always going to do well and Saint Neil's record is all the more impressive given that three of those four games were against teams higher than us in the table...........and did any of them look better than us? Middlesboro were very much 2nd best in their own hostile backyard, the Codheads are one of the form teams in the championship but they struggled to dent Leeds' defence whilst the high and mighty Saints committed daylight robbery to bag the three points in a game they were dominated from start to finish by a buoyant Leeds eleven. The Leeds team has been transformed. Becchio, Brown, O'Dea & Lees are playing to such an improved level they surely will be tested for performance enhancing drugs?  If they are all the doctors will find though is numerous injections of robust motivation administered by Saint Neil and his disciples.

Yes things have changed quickly on Planet Leeds.  The game at Boro was the first in living memory that a certain Mr Bates' name was never mentioned or referred to in a song from the terraces.  This is barely a week since the planned boycott protest for the Saints game.  To say Neil Warnock has made an impact at Leeds is the biggest understatement since Lionel Messi's school teacher declared "Lionel has some talent at football but needs to improve his dribbling skills if he is to make the school team" Yes all of a sudden things are looking rosy in the Leeds Utd garden.

But is there enough time left for Leeds to make a belated challenge for the play offs?  With ten games to go and six of them at the Theatre of Renewed Hope there is a glimmer of hope.  Forest reached the play offs with a total of 75 points last year and this year I suspect the same number of points will be enough to enter the play off lottery.  So 22 points from 10 games is all that's needed..........six home wins and 4 points from four away games is a tall order............but on the evidence of the last two weeks not entirely out of the question?  So agent Warnock your mission, should you choose to accept it, is to go the rest of the season unbeaten and sneak Leeds into the playoffs.  The momentum you will gain from your unbeaten run will be enough to carry you through to the Play Off final and to promotion immortality.  This message will self destruct in 5 seconds...........................................!

Far fetched? It'll not seem so at 5pm on Saturday after beating West Ham 3.1 and with Marching on Together belting out around ER.  Let the fun begin!
Can't wait.
MOT


Posted by Andrew Butterwick at 20:46