Playing a team who have won 11 of their last 13 games with a depleted side ravaged by injuries and suspensions didn't inspire masses amounts of optimism as we headed south for the Good Friday fixture with Reading.  Something told me this was going to be a truly Long Good Friday.  Eddie & Al were on board the faithful Scirocco as we debated just how many goals Leeds were likely to lose by against an in form Royals side.  The Happy Chocker was absent having witnessed just one too many poor performances by Leeds last week he had decided to give his bank balance a much needed rest for this one. It's safe to say that there was a considerable amount of apprehension amongst this band of mighty whites fans as we sped down the M1.

I had acquired some tickets for the corporate area of the Madejski Stadium so with the car parked in the stadium car park we strode over to the entrance speculating on what the pre match food would consist of.  I was starving so I was rather hoping there would be something a bit more substantial than a Rocket & Feta Cheese Ciabatta waiting for us when we got to our seats.  I was not disappointed though when I saw the words Sausage & Mash and Fish & Chips adorning the menu.  Yum Yum!  Now in Yorkshire Sausage and Mash equates to at least two thick,chunky sausages with copious amounts of creamy mash and lashings of onion gravy.  The Berkshire version had two tiny cocktail sausages stuck on the smallest spoonful of mash I've seen in my entire life with about 4 drops of gravy on top!  After demolishing that in one mouthful I couldn't wait for the fish and chips..............well 3 chips and about a quarter of a fish finger to be precise.  Mmmm as the late resident of nearby Windsor Castle would say "We are not amused" 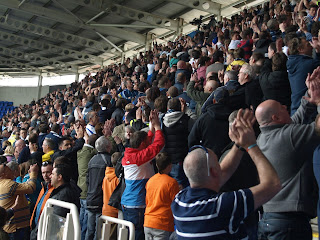 The team news showed a centre back pairing of Bromby and Bruce with Lees at full back and Thompson in midfield.  The stadium was full and the 3,500 travelling support cranked up the atmosphere as kick off approached.  Our seats were adjacent to the Leeds fans and we soon found that we weren't the only followers of the away team in the Reading seats as a chorus of Marching on Together was loudly sung by a number of fellow corporate revellers.  This could be interesting?

As the game kicked off Eddie, Al and myself respected the "turn your back" protest in remembrance of Kev & Chris along with the majority of the away support.  We did get some strange looks from other fans in our section though. Reading immediately put Leeds under pressure as they looked for a win that would take them to the top of the table.  Despite the football on the pitch I couldn't help noticing a stunning black girl with her young son who had sat down next to me.  Dressed in clothes that were definitely not bought at Primark she was clearly not your average football fan.  "I think I'm sat next to a WAG" I whispered to Al who nodded despite his tongue poking out of his mouth in a sort of drooling manner. 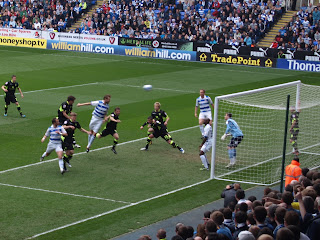 Back on the pitch two early corners were sent into the Leeds box from the lethal left foot of Mr Harte both of which went scarily close to the goal.  This could be a difficult afternoon?  Leeds had set up in a defensive manner to try and keep the big guns of Reading quiet.  Both Kebe and Roberts looked dangerous with the latter showing some touches of class mixed with a pinch of petulance when he lost the ball near the corner flag.  His berating of the linesman for not giving him a free kick didn't go unnoticed by the Leeds fans, "Jason Roberts is a W*****, is a W*****" belted out from the stand to my right.  The puzzled look on the little boy's face on my left and his mention of Daddy gave me the first inclination of who his stunning Mum was.......Mrs Jason Roberts?  Mmmm best watch my P's and Q's when he's got the ball from now on?

The tackles were now flying in and on 13 minutes young Zac Thompson paid the penalty for a rash challenge on McAnuff and Leeds were down to ten men.  Bollox! Warnock had certainly fired his depleted squad up before the game but with X rated tackles flying in all over the pitch it looked like Thompson's wasn't going to be the only red card of the afternoon.  The sending off ignited a heated debate around me with certain Reading fans instantly claiming this was all part of a Warnock conspiracy against the Royals.  I don't know the history with Saint Neil and the Royals but I just thought it was a stupid challenge by a young inexperienced player? After a few minutes of heated exchanges we all made friends though.............that is until Mr Pugh decided to try and take Karacan's ankle off in another reckless tackle.  FFS do we want to get everybody sent off I snapped.  Mr Conspiracy Theory in front of me was now purple with rage not helped by the taunting he was now getting from the Leeds fans in the away end.  Mrs Roberts took Master Roberts for a strategic toilet break while things cooled down. 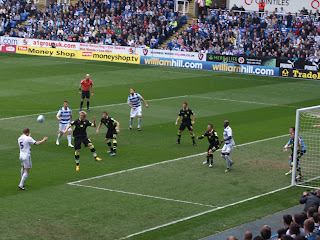 Leeds were under increasing pressure but were defending with the passion and desire that has been so lacking at home of late.  Unfortunately for Karacan he was clattered again this time by Brown and limped out of the action.  The "Dirty Leeds" tag was bound to get an airing by the media after this match I thought.  But the niggly tackles were'nt all one way, Master Roberts' Dad went through Lonergan needlessly with a knee to the kidneys as he chased a lost ball.  In between all the violence on the pitch Harte hit a post with a curling shot and Lonners dealt with a long shot easily.  At the other end Ross Mac went near with a shot but ten man Leeds' focus was on holding onto what we had roared on by a continuous wall of noise from the away support.  The half time whistle went with Reading getting more frustrated at their lack of ability to make their extra man count.

Manager of the month McDermott worked his magic on the Reading team at half time and they came out intent on stretching Leeds wide to try and snatch the vital first goal.  Leeds goal was under siege as Warnock's ten man warriors battled to keep their 5th successive away clean sheet with a display that had shades of Rourkes Drift and The Alamo all rolled into one.  Reading were now getting more frustrated as Pugh seemed determined to get a 2nd red card for Leeds with some over reckless lunges.  As the game reached the last quarter it was suddenly Leeds who looked as if they could snatch an unlikely victory.  First Ross Mac latched onto a poor clearance and whizzed a shot inches past Federici's post and then moments later he broke away in mid field and laid on a golden chance for Snoddy just 12 yards from the goal but for the 2nd week running our captain side footed a 24 carat chance tamely at the goalie.  Double bollox!  Buoyed by the hope of three points the Leeds fans lifted the decibel levels even more to try and suck the ball into the net.

The escape stung Reading into action though.  Rotherham reject, Le Fondre, soon had Mr Conspiracy Theory dancing in the aisles as he slid the ball into the Leeds net only for the linesman's flag to curtail his celebrations.  Leeds were on the back foot though and not for the first time I suggested to Al that a few fresh legs wouldn't go a miss for the team that glow in the dark.  But Leeds were tiring fast and Le Fondre soon broke Leeds hearts with 4 minutes left as he bundled the ball over the line from one yard after reacting quicker to a headed ball back into the 6 yard box. 1.0 Reading and the relief spread around the home fans like an unexpected Tsunami. It was all over on 90 minutes when Master Roberts' Dad turned Robinson in the box with the help of his elbow and fired the ball goal wards for Le Fondre to once again to nip in and secure the three points for the Royals.  Mrs Roberts was out of her seat and Mr Conspiracy Theory was doing a jig as I bemoaned a gallant effort by the ten man "Dirty Leeds" team. The weary Leeds team saluted their fans after the final whistle who were still singing loud and proud.  Jason Roberts came up to the Premier Suite to collect his son and stunning better half after the game.  I thought about accusing him of elbowing Robinson..................nah not worth it.

The long journey home gave plenty of reflection time on the game.  The robust tactics of Mr Warnock's team will not win any neutral fans for style and elegance but with the quality and resources available he has made Leeds a difficult team to beat................away from Fawlty fortress Elland Road that is..........but in doing so has resurrected the Dirty Leeds tag. Both the printed and TV press will quickly pick up on this me thinks but  Neil Warnock won't give a monkeys because as the song goes "We're Leeds United we don't give a F***"

Derby next up on Monday at Fawlty Towers.  Will we have a team left to play? Can we beat Derby for the first time for eons? Will we keep 11 players on the pitch?
Can't wait.
MOT


Posted by Andrew Butterwick at 23:31

I know exactly who wrote this- you were sat right behind me! As for Mr Conspiracy Theory, that's just thick Yorkshire mentality. Leeds/Warnock are dirty f*****s and the whole stadium knew it. All your 'fans' wanted a tear up, and you were close to getting one. Next time f*** off in the away end where you belong.