A slate grey sky over LS11 greeted the Happy Chocker and yours truly for this Easter Monday clash with Nigel Clough's Rams.  The sky seemed to match the mood of most fans in a half empty stadium before a match that had no more than both team's pride at stake.  Mr Warnock had set Leeds up with Nunez alongside Becchio with Ross Mac out wide.  At the back O'Dea returned with Connolly at right back.  The die hard fans who had given up other Bank holiday delights to witness this game needed some early inspiration to ignite a very flat atmosphere.  What they got was the now familiar sight of a Leeds side playing with next to no skill and even less confidence at the Theatre of lost Hope.

Derby, who began the game on identical points as Leeds, started the better as they took immediate advantage of our generous slack marking style to create a couple of chances from dangerous crosses.  Lonergan tipped a looping header away but all the worrying signs of a shaky defence shone through the gloom of the now persistent rain. "Can't see this being nil nil" I suggested to HC.  He rolled his eyes and laughed.  On 25 minutes Leeds once again decided it is more entertaining if we play with ten men as Michael Brown implanted his boot in a Derby player's groin.  The ref had no hesitation in brandishing yet another red for a Leeds player.  So we were down to ten men, playing badly and with just 65 minutes to go.  "This season can't finish quick enough for me" I muttered frantically searching for any positives from the antics on the pitch.  Even I couldn't find any. 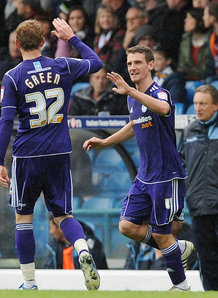 At least the sending off sparked some life into the game and for five minutes Leeds gave the briefest indication that they were up for another backs to the wall performance, but with a reduced midfield containing two centre forwards in Nunez and Ross Mac together with the nomadic Danny Pugh things didn't look good. They looked even worse on 31 minutes when Bryson was allowed all the time in the world to curl a simple shot into the top corner of the net to give Derby the lead.  "This could get worse than Forest" I suggested with a heavy heart.  I know following Leeds is never easy but this is getting ridiculous.

Leeds struggled through to half time with just the one goal deficit. Frank Fielding in the Derby goal only had a Ross Mac header to deal with although Becchio should have done better with a glancing header from a free kick. At the other end Derby looked dangerous each time they tested the famously porous Leeds defence.  Gloom descended over the Capt's Lounge. Leeds clearly don't have anything like the quality of players required to prosper in the championship and with a combination of suspensions and injuries depleting the squad all our weaknesses were being cruelly exposed by a very average Derby team.

The 2nd half was torture to watch.  Leeds were for the most part clueless and made little impression on Derby who stuck to their task and grabbed a 2nd goal after a last ditch tackle blocked a shot from Jeff Hendrik and the ball fell to Davies who slotted home from 13 yards. 2.0 and game over with 25 minutes to go.  Webber, Paynter and Rogers came on for Ross Mac, Nunez and Becchio respectively.  Webber should have pulled one back when he was released by Snoddy but his shot went embarrassingly wide with just the goalie to beat.  Sort of summed up the afternoon.

Surprisingly the score remained at just 2.0 as Leeds went down to their tenth defeat at home where they have now conceded an eye watering 38 goals this season.  To say this squad is not good enough almost ranks with the fact that the vast majority of Leeds fans are well pissed off as the understatement of the year.  From today I would say only O'Dea had a half decent game.  That's how bad it was.  It was the once again the worst performance of the season by a team that don't deserve 5,000 fans turning up never mind the 21,000 that endured another piss poor performance.

Just four games left now and on this evidence we have already witnessed our last win of the season.  Very dark days at the Theatre of complete Drivel.  Peterborough at home up next.  Dread to think what will happen then.
Can't wait................for a better team.
MOT
Posted by Andrew Butterwick at 18:46

Sounded absolutely awful. Do love your blogs though, the only thing I look forward to at present re #lufc
Roll on next August
Richard