Blackpool away is always a fixture that brings an extra helping of excitement to the normal menu of a Leeds awayday.  The chance to sample the dubious delights of one of England's top resorts is seen as an opportunity not to be missed in a lot of fans eyes.  In practice the fresh wind blowing off the Irish Sea around the tightly packed streets of the scruffy B&B's that tumble back from the promenade somewhat spoil the image of Blackpool as the fun capital of the north.  There are plenty of pubs for the traditional pre match refreshments though and it was into one of these, The Auctioneer, that the Happy Chocker, Quiet One and my good self found ourselves debating the forthcoming clash with the Tangerines.

Could we continue where we left off on Saturday?  Who would replace the injured Paul Green in the starting line up? How would we stop Tom Ince, Kevin Phillips, Baptiste and the other stars of a Blackpool team who finished last season in a rich vein of form before losing to the Hammers in the Play Off Final? Would the temporary away stand  collapse when we celebrate a Leeds goal? Quietly confident was the mood of most fans as we queued to get through the security barrier and into the ground.  Alcohol had severely affected most peoples judgement though! 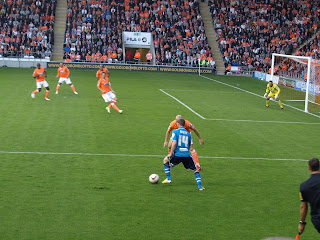 Tom Lees started at centre half with Pelts moving to left back and Aidey White filling Paul Green's spot on the right side of midfield.  The rest of the team remained the same.  Danny Pugh sneaked onto the bench.  The 1700 travelling fans raised the decibel levels as the game kicked off with Paddy's party song receiving acknowledgement from the man himself in the Leeds goal.  As in the game against Wolves Leeds started at a high tempo trying to hurry Blackpool into mistakes.  In response Ian Holloway's men stuck to their slick passing style to try and open Leeds up leading to a frenetic opening 5 minutes.  Pearce threw himself at an Eardley shot before Gomes tested Kenny.  At the other end Ross Mac escaped the tight Blackpool back line only to be flagged for offside.  "Marching on Together" belted out from the away fans as they attempted to lift a battling Leeds side.  Blackpool were quick and decisive in possession with Kevin Phillips the fulcrum of most of their attacking moves.  Paddy Kenny was earning his money in the Leeds goal though with three outstanding saves in the first 15 minutes.  Memories of Blackpool's 5.0 thrashing of Leeds at Elland Road began to surface. 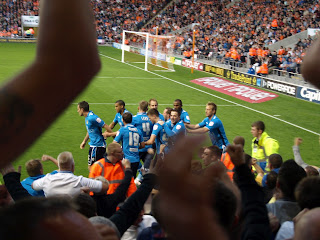 Then out of the blue Leeds were in front.  Pressure from Varney brought an initial corner and after the first one was cleared behind by Baptiste Tom Lees thundered in to the 2nd and buried the ball in the net.  1.0 Leeds. The away fans went delirious at the success of Leeds first meaningful attack.  The goal fired up the home side  as they stuck to their guns and tried to cut Leeds open with slick one touch football.  Ince, Phillips and Baptiste started to threaten every time they got the ball which seemed to me to be all the time.  But for Kenny Leeds could have been four down as he performed heroics in the Leeds goal as the game headed for half time.  "We're hanging on again" I muttered to HC as the ref blew his whistle to bring the half to an end.  Somehow Leeds were 1.0 nil up thanks to a combination of great goalkeeping by Kenny, two penalty shouts turned down and some wasteful finishing from Blackpool.

What we needed in the 2nd half was to stop Ince and Phillips running the show. What we got was an exhibition from Blackpool in how to play effective one touch football as our hardworking, gritty midfielders chased tangerine shadows.  It started with Osbourne rattling the inside of Kenny's post with less than a minute of the 2nd half gone.  "This is going to have to be a backs to the wall" performance HC observed.  It seemed it would only be a matter of time before Blackpool equalised but for all their superiority in possession Blackpool still couldn't convert the possession into goals as Leeds continued to battle hard.  In between the waves of Blackpool attacks Becchio so nearly got a second for Leeds as he tested Gilks with a header and later put a golden opportunity wide.  Spit the Dog had replaced Ross Mac and Matty Phillips and Dicko had come on for Blackpool.

Leeds' resistance finally crumbled with just 15 minutes to go.  Varney lost the ball in his own half and suddenly Blackpool were round the back of the Leeds defence......Crainey (who's too shit to play for Leeds) pulled the ball back for last season's winning goal scorer, Dicko, to score again.  1.1 and the stadium was now rocking as the home fans found their voice.  Blackpool smelt blood and went for the exposed Leeds jugular.  Their crisp pass and move style had Leeds bamboozled and they took us apart for the remainder of the match.  For the record Pugh replaced White and Blackpool almost immediately got the winner as Matty Phillips turned in another bye line cross.  After that it was like shots in as the Tangerines closed out the game looking for more goals.  The only surprise was they didn't add to the two they had already got.

This was a rude awakening for Leeds so early in the season.  Blackpool looked very good and very pleasing to the eye and if they continue in this form it's difficult not to see them in the mix for automatic promotion. In truth Leeds had absolutely no answer to Blackpool's attacking verve that saw 20 shots aimed at Paddy Kennys goal. Kenny was Leeds' best player by a mile with Lees and Pearce manning the defences heroically in front of him.  Difficult to take too many positives from this game other than we did well to keep the score down to just two.  One thing we did learn from this trip was that Tom Ince might not have a very acceptable blood line but he is a class player in this division.

Not the best visit to the seaside I've ever had! Next up is Peterborough on Saturday. Hopefully we can get something out of that trip?
Can't wait.
MOT.

Posted by Andrew Butterwick at 01:42

Nice report and made me chuckle...we worry about that temporary stand too !

Big Al,
Thanks for the comments. I thought your lads looked a class apart last night. Will you hold onto Ince though?
Regards
MOT