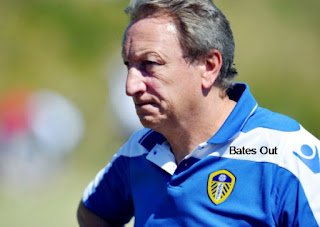 The dark clouds of depression hang heavy on Planet Leeds this week as the stark reality of this season's challenge was emphasised all too clearly by first Cardiff and then Hull City.  A squad that was hopelessly short on numbers and quality at the start of the campaign has already been ravaged by injuries to key players and with no money to even attract the leftovers of the loan market to LS11 prospects of anything other than a tale of battling defeats look extremely low.  All this against a background of the longest takeover/buy out of a football club in history conspires to offer little hope of any real change in the near future.  Even for a supreme optimist like yours truly it is almost impossible to keep your glass half full.  As each week goes by Neil Warnock looks even more frustrated than the previous.  He knows what is needed to get Leeds into the promotion places but he also knows that what he's got won't cut the mustard in lifting Leeds to the higher echelons of the championship.  At this moment in time our chances of securing mid table security lies in the skills of the backroom staff in the treatment room or the likes of Poleon, Byram stepping up to the plate and performing like experienced championship players.

The impact of the frustration at the Theatre of Hope is very visible in the dwindling crowds at both home and away games.  The 19,000 crowd for the mid week Yorkshire derby compares almost exactly with the one for the midweek visit of mighty Carlisle United back in the dark days of League 1.  Everton are the visitors on Tuesday in a plum Cup draw and we aren't even bothering to open the top tier of the East Stand.  Now Leeds fans are some of the most loyal and resilient fans in  the country but everyone has their limit and this season appears to be one too far for a significant number of battle weary mighty whites followers.  A cancerous malaise is spreading through the whole LUFC community and the source is firmly based in Monaco and the home of Chairman Bates.  Whatever his strategy and intentions have been since he took over the club 7 years ago the end result is that we have trod water in respect of League position during his tenure, admittedly with the added excitement of 3 years exploring the murky waters of League 1, and we now appear to be back where we started, ie a squad of average players and the club balancing dangerously on the edge of financial oblivion.  Yes the club is turning a profit now but only on the back of selling any decent players on, usually to Norwich.  Now Cuddly Ken obviously will listen to offers for the club or he wouldn't have launched into due diligence with the Bahrain consortium................I struggle to understand why we haven't had more interest although despite the massive fan base and the history of the club the true facts are that real investors want to purchase some assets if they are buying a club and currently we don't own either the ground or the training ground.

Back on the pitch we play another high flying team in Notts Forest today.  Hopefully Becchio will be back from the injury that saw his early exit from the Hull game to give the team a boost although Poleon had an impressive spell against the codheads.  Forest are a team that have been able to attract suitable investment into the club and with it the funds to assemble a strong squad.  Many fans will cast an envious eye towards the merry men of Nottingham today but will Warnock's outlaws have enough guile and firepower to liberate 3 points from the rich and give to the poor of Beeston?  Time will tell.

Travels of a Leeds Fan
Posted by Andrew Butterwick at 10:23