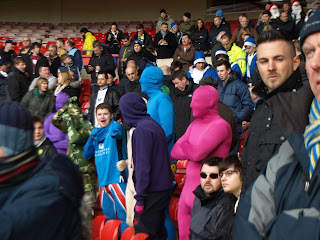 The bright sunshine and festive optimism were alive and well as we headed south for the Boxing Day clash with Notts Forest.The road was clear as the Happy Chocker, Quiet One and myself debated Leeds chances as we hurtled down the M1.  With 5 wins out of 6 Leeds were high on confidence.  Could we winkle 4 points out of next two games? Who would he play in midfield with Tonge now returned to Stoke? Who would suffer a post Xams Day hangover? More to the point would Notts County's club be open for a pre match drink?

Thankfully the latter was a resounding yes so we took advantage of the oldest Football league club's superb social facilities to readjust our Xmas heads to matchday heads. That didn't take long as the Leeds extended family filled the large bar. Little did we know this would be the highlight of the day. The team news was interesting.  Austin and Brown in centre midfield and Drury at left back.  The words "about time" suddenly became very well used as the assembled Leeds fans discussed the absence of Captain Peltier. As ever Leeds fans had travelled in force with a number of fans in fancy dress.  The lunch time kick off had taken some of the edge off the atmosphere but both sets of fans did their best to blow away the post Xmas lunch cobwebs with the inevitable songs about Clough, Revie and Savile with the odd reference to Scabs thrown in for good measure. 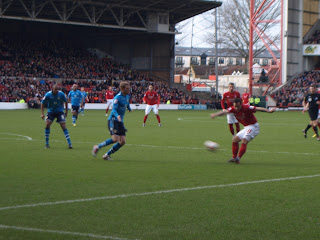 Leeds started well with two corners in the opening minutes putting pressure on the home side.  Forest looked to be the side with the post Xmas blues as Leeds looked very comfortable in the opening exchanges.  The team had a better balance with Drury at left back and he was involved in the attack that set up the opening goal on 12 minutes. Drury initially drove at the Forest defence before laying the ball off to Thomas who hit a high ball into the box. Becchio and Diouf challenged for the illusive ball before Green tapped the ball into the gaping net from 1 yard out. Get in. 1.0 Leeds. Leeds continued to have the better of the play with the returning Austin skimming a shot over the bar on 20 minutes.  This was looking good and was well worth getting up early on Boxing Day to see.

Then the game changed.  I don't know why but it did.  Round about 30 minutes had gone when Forest suddenly realised they were in a game and clicked up a gear.  Andy Reid, Billy Sharp and co surged forward testing the Leeds defence that started to creak ominously. Forest had two good penalty appeals turned down one for handball. Ironic cheers of "handball" followed from the Leeds fans every time we touched the ball but by now I had my ominous, pessimistic head on.  "He'll not turn a third one down" I comforted HC as we watched Forest tear into Leeds.  Sure enough a minute before half time Tom Lees was adjudged to have given away a penalty and Billy Sharp duly dispatched the spot kick with ease.  1.1. Leeds needed the half time whistle and quick.   They resembled a heavyweight boxer gasping for breath as the bell approached. Kenny turned a Reid free kick round the post just before the final whistle of the half. Half Time 1.1. 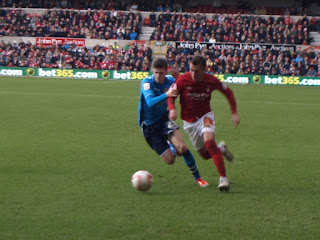 The early optimism had now been replaced by a foreboding that was borne out of following the mighty whites through thick and thin, mainly thin, for far too long! The ghost of "throwing away a one goal lead" was about to well and truly haunt Leeds. Forest started the 2nd half where they left off in the first.......battering Leeds. Dexter Blackstock gave an indication of what was to come as he climbed above the static Leeds defence and headed inches over when he should have scored. The midfield of Austin and Brown were slowly submerging under the Forest flood water as the home crowd urged the Reds forward.  There was an all too familiar inevitability about the 2nd goal.  Blackstock guided a simple header into the unmarked Sharp who took it round Kenny unchallenged and slotted the ball into the empty net. 2.1 Forest. Bollox.  The next 7 minutes were torture.  Forest scored two more and had one disallowed for offside as Leeds completely capitulated.  Austin turned in an own goal and Blackstock was granted the freedom of air space in the Leeds penalty box as he headed the 4th.  "We want Seven" taunted the Forest fans.  The way they were playing that seemed very, very possible.

Pearce, Somma and Ross Mac replaced Diouf, Austin and Byram respectively as Warnock looked for the most unlikely of comebacks. Kenny palmed away a thunderbolt from Hutton as Forest closed out the game with ease despite Somma gaining a late consolation goal.  Full time 4:2 Forest.

A disappointing performance from Leeds to say the least.  I left the ground with 4 minutes to go something I very rarely do but there's only so much frustration and disappointment I can take in one game. It didn't help having two "jobsworth" stewards obscuring our view for most of the game.  If we needed a reminder that this league is very, very tight and we need just a bit more quality in the team to mount a serious challenge for promotion this was it. Apart from the first 20 and the last 10 minutes Leeds were hopelessly out of sorts against a slow starting Forest team who's quality on paper isn't reflected in their current league position.

The journey home was quiet as it usually is when we get stuffed. Football is such a frustrating game.  Nobody stood out in the Leeds team today.  Not sure if it was a Xmas dinner hangover or the fact that the team's engine room in midfield had been changed again but Leeds were in need of a large dose of Alka Selzer today.  Austin was clearly off the pace after coming back from a long lay off. Drury had a solid game that makes the mystery as to why he doesn't start each game even more intriguing. Thomas disappointed with his lack of willingness to take a man on.  Should he be kept or singed in the transfer window?  Not sure.  Certainly the guy stood behind me didn't think so "I can see why the Baggies don't want him" he seethed as Jerome lost the ball yet again.

What we need after a game like this is a nice easy game to get us back on track, instead we've got the Codheads away who are currently flying high in the automatic promotion places. Wonder which team will turn up for that one?

Posted by Andrew Butterwick at 18:17