After the Boxing day stuffing we got at Forest I was a tad apprehensive about our clash with the Codheads.  Steve Bruce's men were sat firmly in 2nd spot after an impressive unbeaten run had seen them climb serenely up the table. Still we joined the packed train at Selby and headed for Hull and a pre match pint in Wetherspoons. The team news was baffling/intriguing or just plain daft depending on your point of view.  Somma and Ross Mac were starting up front with Diouf rested and Becchio on the bench.  The formation was changed to 5-3-2  to accommodate 3 centre backs.  Byram and White were at wing back with Green, Brown and Norris in midfield.  Mmmm.........so presumably Becchio was on the bench to prevent him picking up a 5th booking and receiving a ban before the slate is wiped clean on Tuesday? But why was Diouf left out completely? Even with a couple of pints inside me Mr Warnock's impression of the Tinkerman didn't fill me with confidence.  My mood wasn't lifted by the 20 minute walk up Analby Road to the ground in an East Yorkshire monsoon. What I needed was a stirring performance from the mighty whites. 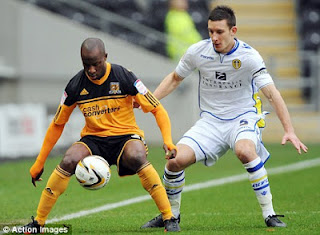 The game kicked off with the home fans getting an early hat trick of "You're not Famous any more" "We all hate Leeds scum" and the Jimmy Savile song.  Yawn! On the pitch NW had set Leeds up to counter the Hull formation but it was the Tigers who were roaring in the opening exchanges as Koren, Aluko and Elmohamady strolled across the sodden turf whilst taunting the lack lustre Leeds players.  Pearce was struggling to get any where near Aluko as twice he lost his marker in the Leeds box but failed to take advantage.  The ref wasn't helping matters neither with some strange decisions that all seemed to favour the home team.  20 minutes gone and Leeds hadn't had a look in going forward and were looking very vulnerable at the back.  "This has got Forest written all over it" HC commented above the numerous comments of shite, useless and FFS that were constantly being used around me.

Leeds were struggling to keep the ball as Hull pressed their visitors hard.  We always seem to struggle when teams press us, especially when we've nobody in the team who can create space and time to pick out a decent pass.  Somebody like..............Diouf for instance. The game somehow reached half time with the score goalless but White, Ross Mac and Brown found themselves in the ref's notebook.  Both White and Brown can count themselves unlucky for their yellows.  Optimism was in very short supply with the urinal philosophers. Warnock's team selection had baffled most people.  "It's as if he's just written off this f****** game" one frustrated fan commented. "Why the f*** do you rest your top scorer in a local derby" enquired another. "have we had a shot yet" "No" came the universal reply. The battle hardened fans of the mighty whites were definitely not happy. 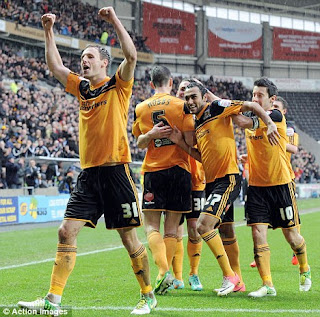 Somma was replaced by Varney at half time adding to the incredulous frowns on most fans faces.  "Now that is taking the piss" the guy next to me shouted, clearly not a Varney fan if there is such a person? Hull had failed to take advantage of an anaemic Leeds side in the first half but they started the second determined not to make the same mistake as they poured forward looking for the opening goal. Aluko fired in a fierce shot that just drifted wide before Kenny made a superb one handed save from Meyler.  Leeds had nothing in reply and the inevitable Hull goal came on 51 minutes when Koren found Evans in acres of space in the Leeds box and he drilled in a low shot past Kenny into the corner.  The home support in the sell out crowd erupted whilst a large dose of deja vu descended on the away support.  Hull were now going for the jugular. Koren whipped in a stinging shot that Kenny did well to save.  From the resulting corner Meyler was given the freedom of the penalty area to head unchallenged into the net. 2.0 Hull and game over.

If the first part of the game hadn't been bad enough the remaining minutes were embarrassing as Hull took total control and toyed with a woeful Leeds side who lacked any passion, pride or direction.  Austin replaced Norris on 70 minutes but struggled to make any impact.  The game fizzled out to an easy 2.0 victory for Hull.  Hull dominated from start to finish and I can't remember a shot on target for Leeds. Not worth getting soaking wet and freezing cold for me thinks. Boo's rang round the stadium from the away support at the end followed by a chorus of "What the f****** hell was that" in response to one of the worst performances by a Leeds team for a long while.  The new formation didn't work floundering on the age old problem for Leeds, lack of pace, both at the back and at the front. Brown never gave up and was one of the better performers in a white shirt.  That's how bad it was, no disrespect to Michael Brown, but when he is pushing for the best player in a game we have got a big problem.

Much of the chatter amongst the sodden Leeds fans as we streamed away from the stadium was about Neil Warnock.  He is fast loosing the support of a lot of fans.  His tinkering with the team never seems to work and today's selection was strange at best and desperate at worst.  The transfer window swings open this week.  On today's showing we need 6 or 7 players not 1 or 2.  Will the new owners have the cash to splash?  Will they give it to NW to splash? Either way it's difficult to see us improving enough to challenge for a top six place at the moment.

Traditionally Xmas is a time when Leeds start to go into decline in recent years.  Are we going to see the same old problems with a different team and management this time round? I do hope not but I'm not holding my breath.  We've got a struggling Bolton side next up at ER.  If we fail to improve on the last two showings then the natives will be more than restless. Not sure where we go from here although it will be interesting to see what sort of quality, if any, come through transfer window in the next two weeks?

Posted by Andrew Butterwick at 18:15