Life is never dull on Planet Leeds is it? 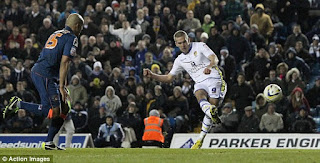 Just when you thought the season was over and it was safe to start preparing for close season hibernation Leeds provide a tiny spark of hope by not only beating Blackpool but keeping a clean sheet as well. In a match that saw Morison open his Leeds account with a classic poachers goal................alright the ball rebounded to him in the box and he smashed it home......and the cheaper ticket prices saw of the missing fans return to Elland Road you could be forgiven for thinking that all was suddenly rosy again in the Leeds garden. Warnock's post match interview was laced with subliminal references to how much he felt Becchio had held Leeds back and how much better Morison was in that position. I do hope Colin is right but is there any need to continue with the "it's not my fault Guv" stance when talking about results good or bad?

A win against a Blackburn side who have hit a bit of form since Michael Appleton arrived will send Leeds fan's expectations into turbo charged overdrive less than a week after the depressing capitulation at the Etihad. A Leeds fans we should used to this teasing by now. We should expect our form to be consistently inconsistent as it's been for the last two years but that won't stop us latching onto any possibility of improvement no matter how slim it is. After all we have the same team, manager and tactics that have failed miserably on the numerous trips away from LS11 this term so why should the journey to Ewood Park be any different?

I suppose that's the $64,000 question. Has Colin suddenly found a formula that works? Is 4.3.3 more effective than 4.4.2 especially as we've failed to secure a half decent winger? Is Steve Morison the answer to all our perceived attacking failures? Is the answer to the midfield quandary a Tonge, Green, Norris threesome? Or was a our victory against the Donkey Lashers just a statistical blip on our journey to mid table mediocrity? The probability is it will be the latter. We have failed to keep a single clean sheet on our travels and the paltry three away victories have come against bottom four opposition so to plunder all three points at buoyant Blackburn is a very tall order indeed.

News of further denials and refusals of offers of further investment into the football club continue to pepper all forms of news media together with varying reports as to the manager's future at the club for the rest of the season. Has Adkins actually been in negotiations with GFH? If he has will he start before the end of the season? Should we give Richard Naylor a chance? What about Poyet? As ever with Leeds there are more questions than answers. Life is never dull following the mighty whites.

So I will travel to Blackburn along with hordes of other vile animals hoping for an unexpected victory that would defy most footballing logic and re-ignite a spark of hope in this most frustrating of seasons. Morison to score again anybody? We can but hope!

MOT
Posted by Andrew Butterwick at 19:38