The last game of the season always has a special feel to it regardless of our league position. The fact that we couldn't go up or down was a minor technicality as the extended LUFC family congregated for the traditional end of season celebrations and fancy dress party. If we won we could all delight in Udinese's frustration and if not we could have the delicious prospect of contributing to a whole lot of Humberside misery as the Codheads choke. Who said there's nothing to play for? 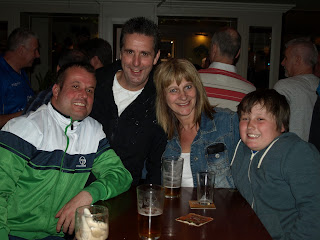 The Happy Chocker, Quiet One and the Kitsons joined me as we pointed the car south towards Watford at a ridiculous hour for a Saturday morning. The excited buzz of football chatter ate up the miles as we left the M18 behind and joined the M1. Inevitably we speculated if the mighty whites could manage a first half goal for the first time since god knows when and even better if we could actually win another game away from West Yorkshire. With the car safely deposited in a multi storey park in Watford we joined the excited pre match buzz in the strangely named "Moon over the Water" pub. Both sets of fans mixed well in a noisy carnival atmosphere with the majority Leeds fans lifting the roof off the pub with the full range of the LUFC songbook. We were in a dilemma though. We wanted Leeds to win but that would mean Hull would be promoted.  Mmmm a difficult one for sure but one the Happy Chocker was absolutely sure of.  He wanted Watford to win and scupper the Tigers chances. 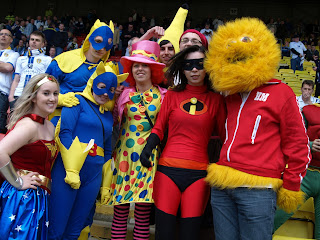 We joined the convicts, Humpa Lumpas, Batman and Robins, Banana's and the rest of the fancy dress brigade in the ground for the kick off. Zac Thompson was on the team sheet but then had to stand down when it was realised that he couldn't play because technically he was still on loan. Michael Brown stepped up to the midfield spot instead. Drury replaced Warnock at left back while Morison returned up front. Watford also had to make a late change as Almunia was injured in the warm up and had to make way for Bond.  The demented home tannoy man tried to whip up the home fans into a frenzy to support the Golden Boys in what he described as "Watford's biggest game of a generation". Well at least he tried. 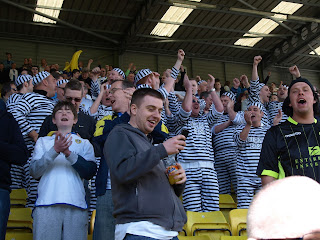 The game started in bright sunshine as Mr Tannoy's Golden Boys, otherwise known as the Udinese 2nd team,  started slickly as you'd expect from a team with a chance of automatic promotion. Leeds showed that they weren't just going to roll over and die though as they tried to match the home side's passing style but it was a nasty challenge that was the first thing of note in the game. Morison went for a high ball near the touchline only to be flattened by a well aimed elbow that knocked him out cold before he even hit the ground.  Surely that was a straight red? The referee clearly thought not as he made allowances for the way Italians play their football. Morison lay motionless on the ground as the medical staff attended to him during a lengthy delay. Poleon came on to replace the groggy Morison as the game got under away again. The Hornets were buzzing as they sort an early goal to put pressure on Hull at the KC stadium. The tenseness of the scrap for the last automatic spot between the Hornets and the Tigers was not lost on the visiting fans. "We're only here to spoil your party" belted out from the 2,000 raucous away fans as the home fans whispered some encouragement to their team.

The Watford centre forward, Troy Deeney, showed all the attributes he needs if he gets to the Premier League with Watford.....petulance, arrogance and an irresistible urge to contest every decision made by the referee. He quickly went to the top of my list of most obnoxious players in the Championship and when he flicked his leg back into a prone Tom Lees after a tackle I was ready to lynch him.  He would eventually get his come uppance though.

Poleon made an immediate impact with his extra pace up front and very soon contributed to the 2nd lengthy delay of the half as he chased a long ball from Tom Lees through before nudging the Watford centre half into the reserve goalie Bond. He lay motionless on the turf .  He was clearly shaken and didn't stir for a good ten minutes before being stretchered off with concussion and a broken nose. Watford's third goalie of the day, Bonham, went between the sticks.  The young goalie showed nerves as he handled his first couple of balls but with three minutes to the break he got into an awful mess with Ekstrand that left Poleon with the simple task of rolling the ball into the open net for the opening goal. The visiting fans danced with delight not because Leeds were in front but because we had finally scored a first half goal. Mint. 1.0 Leeds. 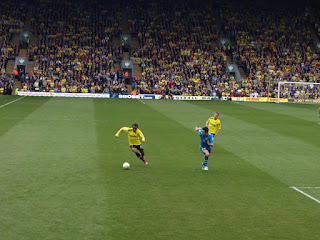 "1.0 to the Ingerland" rung out from the away end. The lead was short lived though as the Hornets stormed back and equalised within two minutes with a well taken goal from Abdi.  Over at the KC stadium Cardiff were about to put the cat among the pigeons as they took the lead and put Udinese in pole position for promotion. The 4th official held up the board showing a staggering 16 minutes of added time.  "That'll be interesting come the end of the game, Hull and Watford are now out of sync" I mused. Half time 1.1 and the automatic promotion situation on a knife edge.

The second half kicked off and soon news filtered through that Hull were now leading 2.1 and were back in the automatic promotion spot. Watford's crowd went quiet and their players seemed to accept their fate as Leeds played in a relaxed style that frustrated their hosts to a background of incessant noise from the large away following. Green smashed a shot goalwards that was blocked as the visitors looked the more likely to break the deadlock.  On 70 minutes the petulant Deeney saw red as his outrageous late challenge on Brown earned him a 2nd yellow card. Watford had now all but given up and should have been put out of their misery as Varney missed with a header from 7 yards whilst catching a boot in his face for his troubles.  Penalty ref? Cause not.  Then the big scoreboard announced Cardiff had equalised at Hull.  That meant Watford just needed one goal to get promoted.  Suddenly they woke up and threw everything at Leeds. Paddy Kenny showed  just why he's the best goalie in the championship as he pulled off two stunning saves to keep the scores level as the docile home crowd came to life and Leeds hung on. With all the other championship games finished all eyes turned to Vicarage Road. Could Watford snatch a winner or would Leeds be Party poopers? This was fantastic knowing that all the Hull fans at the KC were cheering on Leeds. I wonder if they were singing MOT?

As ten men Watford pushed forward seeking the illusive goal they left themselves exposed at the back. Leeds broke from defence with the speedy Aidey White, on for Brown, evading a lunging tackle before releasing Ross Mac who was one on one with the young goalie..............he chipped the ball just out of the fumbling goalie's reach and into the net. 2.1 Leeds and the away end exploded as did the KC stadium 200 miles away in Humberside. The first time ever the Codheads have celebrated a Leeds goal. Delicious! Game over. HC was gutted and refused to celebrate.  What a finish to not only the game but the season. Leeds fans celebrated as if we'd won the league............well we had won away and scored in the first half and after the season we've had that's almost the same thing!

The players and Brian McD thanked the travelling fans as the assorted fancy dressed fans poured back onto the streets of Watford in party mood.  I'd forgotten how good it felt to win away. So Leeds finished the season on 61 points exactly the same as last season but finished on a high. Pearce again impressed me with his commanding display and Poleon showed enough flashes of pace and an eye for goal to suggest that he might just be next season's "Byram". A good team performance from Leeds which bodes well for next season. 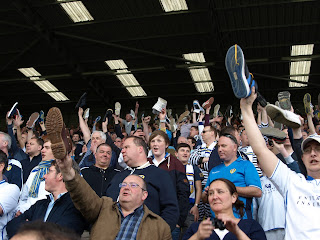 The long drive home flew by helped by a tearful Barnsley fan on 606 thanking their manager Flitcroft for saving them from the drop. It was emotional stuff and brought tears to everybody's eyes in the car. I nearly crashed the car I was laughing that much tha knows! So that's it for another season of trials and tribulations following the mighty whites around the country. A season that started with hope and expectation but quickly descended into the usual mix of frustration and disappointment for those who are infected with the Leeds passion. Brian McD carries massive expectations into the next campaign and I've a sneaking feeling he will deliver. Thanks for reading my musings, moans and observations this season . Hopefully we'll do it all again next time round. In the meantime have a good summer and remember next season will be the one..........

Posted by Andrew Butterwick at 21:20

Thanks for another season of reporting. It's the first site I go to after looking up overnight results.
Have a great summer and I'm looking forward to your reporting next season, a season I think when it will finally happen for us.
If I may steal a line...."Cant wait" MOT
Keith
Auckland NZ

Keith,
Thanks for the comments mate.
MOT

Great match updates once again this season Andrew looking forward to next years. Have a good summer

Have a great summer mate. I always read your after match summary and find it very amusing as well as inciteful. Much better than the YEP! MOT

Great blog - very well written. As a Watford fan, I must commend the Leeds fans for your amazing support - tremendous colour and noise.

Only one thing though - drop the Udinese comments - very unoriginal and getting very boring now. We have had one of the best youth policies for the last 30 years - so give us a break!

Many thanks for keeping a great blog going with wit, passion, and a unique writing style that i very much look forward to. MOT

Watford Fan,
Thanks for your comments and apologies for the Udinese references. You're right it's too easy a hit. Good luck in the play offs.
Anon,
Thanks for the compliments. MOT

Big thanks from two 65 year old former schoolmates, both now based in London. Supported LUFC since 1961 but now only get to a few games each season so very reliant on your excellent blog for the past year or two. Rarely disagree with any of your comments. Many thanks for all the time and effort you obviously put into this.

i live in ireland and find it hard to get to games last friday my father suffered a serious stroke and reading this report has cheered me up no end thanks for all your hard work over the years M.O.T.

As a Leeds fan of 50 years and living in ireland it has been a while since i was at a game, my father suffered a serious stroke last friday and reading this today has lifted my spirits thanks for all your blogs of the last few years they are fantastic keep up the good work and hopefully next year I will get over for a game M.O.T.

Anon in London,
thanks for your compliments.

Kieran9sons,
Sorry to hear about your Father. I hope he makes a good recovery. Thanks for your comments.
MOT