Have you heard a faint rumbling this week? No it's not the distant sound of grunting female tennis players in SW1 nor is it the roar of the crowd as Mick and his fellow pensioners take to the stage at Glastonbury. The rumbling I'm referring to is the sound of a comatose footballing giant stirring from years of stupor and mismanagement as the oxygen provided by some positive activity in the transfer market and the sidelining of Capt Birdseye and Mr Sockless Harvey ignites viral optimism amongst the extended LUFC family. After enduring years of negative and disappointing summers it came as somewhat of a shock when what seemed like minutes after the news that sockless Harvey had been sidelined on the first post Bates day we signed a talented youngster from Crewe, Luke Murphy. Not only that we'd paid over a million pounds for him! Unbelievable Jeff!

Noel Hunt followed Murphy through the door at Thorp Arch to join earlier signing Matt Smith and with Brian McD purring in his media interviews about more signings on the way Planet Leeds was suddenly infected with an unusual feeling.........optimism and real hope for the new season. Not even a speculative rumour that Palace had bid £3m for Byram could dampen the new found positiveness that was now endemic amongst followers of the mighty whites. "Is that for one boot" Brian McD scoffed when challenged about the Byram bid at the press conference. His assured confidence, sharp wit and footballing gravitas has already endeared him to the Leeds clan. Somewhere in Cornwall a deluded, advocate of a less than appealing style of hoofball is grinding his teeth and kicking his dog whilst muttering something about leaving the club in a strong position.....................course you did Colin. 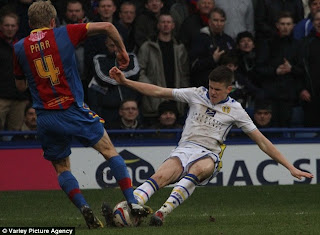 The players are back at Thorp Arch for pre season training and would appear to be full of excited energy ahead of another challenging campaign in the ultra competitive championship. In twitterland Ross Mac was asking his fellow players for suggestions for this years training "fine list".  Early suggestions of financial penalties if Noel Hunt says "like" or if Luke Hollick takes his teeth out typified the training ground banter. It got me thinking though.  Should there be a similar fine list for fans this season? If there was  it would probably include penalties such as:


We will see how the new players, Smith, Murphy and Hunt settle in over the next few weeks but I am particularly pleased with the capture of Murphy.  He is young and talented and comes with a growing reputation for playing excellent football with the old adage of "he's got an old head on young shoulders" which will make a change from some of our less than successful signings in recent years who seemed to have very young heads on very old shoulders. Other players will come in before the season kicks off in August and inevitably players will depart the other way to make room. That won't be a bad thing though as Brian McD spring cleans his squad.  The question on most fans lips will be "can we hold onto Byram?" If I'm honest I for one will be surprised if we do but count it as a bonus if he's still here in September. I am excited though at the prospect of Leeds doing more deals in the transfer market as BM freshens up his squad.  Those of you going to Slovenia will get a good look at the new signings this next week but the true litmus test will be where Leeds are placed after the first 10 games of the new season. Anything above 6th will be confirmation that this could be an iconic campaign.

Yes the comatose giant is gently stirring but visions of the old Theatre of Hope packed to the rafters and bouncing again are starting to come onto my radar. Will this be the year we start to climb back to the footballing summit? I do hope so..............

Posted by Andrew Butterwick at 08:22