The excitement of our first venture of yet another season following the mighty whites grew as we headed south to Walsall for Leeds' friendly with the Saddlers. The Happy Chocker and the Quiet One were on board as we negotiated Spaghetti junction and entered Banks Stadium nestling conveniently along side the busy M6. Once inside the Saddlers club and trying to eat possibly the worst Cornish Pasty I've ever had thoughts turned towards the coming season and our first sight of Brian McD's new signings, Smith, Hunt and Murphy. Pre season talk of a fluid passing game and a team that was thoroughly "bonded" after the trip to Slovenia sparking a note of cautious optimism in this battle weary fan. 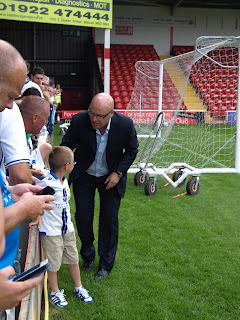 Inside the ground the team were warming up. "Smith is a big lad" I commented to HC as he strode around the pre match routines. Brian McD schmoozed the large away following with autographs and photo opportunities but despite numerous requests no money for beer! Dom Poleon also got in the mood with the photo shoot.  Everything in the Leeds garden was rosy. MOT was belting out from the away end, the sun was shining and optimism was fair bursting out all over..................well as much optimism as Leeds fans allow themselves after years of self torture!

Brian McD had picked his strongest team with Paddy in goal, Pelts at RB Pearce and Lees at CB and Warnock at left back. In midfield Green sat in front of the back four with Tonge, Ross Mac and Murphy scuttling about in front of him.  Smith and Hunt started up front. The game started with excellent, crisp passing and movement creating lots of space and attacking opportunities.  This would have been great but for the fact it was the home team who were doing the crisp passing and not Leeds. Not surprisingly Walsall soon took the lead with a deflected goal from Westcarr after good work by Baxendale. Leeds looked laboured and unsure when they had the ball with a distinct lack of width in their play.  This wasn't what the 2,000 travelling fans had come to see. 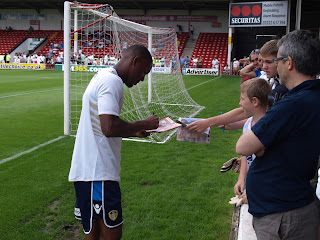 As the first half wore on Leeds did create a couple of chances, Lees had a good header well saved and Ross Mac had a goalbound shot blocked before big Matt Smith had a shot cleared off the line after rounding goalie. Leeds looked vulnerable to the pace of the Walsall frontline though and but for some wayward finishing would have gone in at half time with more than a single goal advantage. The half time mood was on the sombre side in the away end.  Even though this was only a friendly and nobody ever won anything in pre season there were some familiar worrying signs on the field of play. The defence, with the exception of Lees, looked terrified of the pace that League 1 Walsall had in particular Pearce who played most of the first 45 minutes impersonating a rabbit caught in the headlights as the youthful attack flashed past him. Peltier confirmed his unsuitability to the right back position as time and again Leeds moves stuttered to a halt as the ball found it's way to the overlapping Leeds captain only for him to stop and play it back to Pearce or fire a hopeful ball into the box from 45 yards out. When is Byram back? 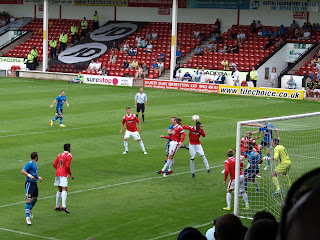 Smith had not prospered on the intermittent service he received and was replaced at half time by Poleon who immediately injected some much needed pace into the Leeds attack. Leeds were now attacking the away end and an early Poleon shot lifted the fans spirits. Tong and Hunt also went near but it wasn't until Walsall changed most of their team that Leeds applied some pressure with Aidey White, on for Tonge, skimming the bar with a first time shot.  Varney entered the fray and he too upped the tempo giving the home defence concern as he tried to convince Brian McD he's worth a start ahead of Hunt. In the end Walsall ran out winners and were unlucky not to get more than the one goal as first Pearce tried to score an own goal with a 25 yard pass back to Paddy who was absent without leave from his goal and then Purkiss wasted a glorious chance as he ran unchallenged into the box to smash the ball over from 8 yards. Final score Walsall 1:0 Leeds with Walsall impressive worthy winners.

Brian McD has still a lot of work to do and the consensus view that we need a couple of quality players before the transfer window closes is difficult to argue against. Of the new signings Murphy had a steady game playing some appetising passes for the front men but also one or two off the radar. Smith looked lost without any crosses coming in from the bye line whilst Hunt was relatively inconspicuous. The lack of width in midfield is a concern. Once Byram returns that will be partially solved.

The journey home was a quiet one. There wasn't much to inspire in the game but it was only a pre season friendly.  Looks like Brian McD will be working his socks off over the next two weeks to bring in some quality additions to his squad before the real games begin.

PS I will be back for the Sheff Wed's game as I am whisking Mrs MOT off on holiday for her 50th birthday.
Posted by Andrew Butterwick at 10:07