The sun was cracking the pavements in Selby as the lunchtime kick off dictated yet another early start to our latest matchday. I will never get used to lunchtime kick off's. It's just not right. Even in Charles Darwin's Theory of Evolution he cited 3pm Saturday kick off times as one of the exceptions to his rule that everything in life evolves. Clearly the TV and Football gods have never read his book! Still that wonderful feeling of confidence and optimism filled the air as the Happy Chocker and the Quiet One joined me for the trip to the Theatre of Hope. After their mightily impressive win at the Keepmoat Brian McD's team extended their unbeaten start to the season to 6 games and sent a shot of real hope through the veins of the extended LUFC family but the good news didn't stop there as Ross Mac signed a new deal to finally rebuff any possible move to the Smoggies or the Donkey Lashers. So for the first time in an eternity the vast majority of Leeds fans streaming to Elland Road had an unusual strange look on their face.  For those who weren't sure what this phenomenon  was it's called " a smiling face"

Selection permutations were the main topic of conversation as we quaffed our pre match refreshments. Would Mowatt and Wootton start? How can he not start with Smith and Poleon after their performance against Donny? What about Drury? Suddenly Brian McD had selection headaches of  a different kind. In the end the team selection was relatively conservative as Wootton was the only change at the expense of Tom Lees. Mowatt didn't even make the bench.

'Arrys expensive array of talent with significant premiership experience looked formidable on paper, Barton, Hill, Johnson, Green, Dunne, Onouha and Wright-Philips with the likes of Jenas, Faurlin and Hoilett on the bench not to mention the goal machine Austin leading the line suggested this was going to be Leeds' toughest test yet. Leeds started brightly though with their patient build up creating a couple of early half chances for Green and Ross Mac but both shots ended up in the South Stand. At the other end pantomime villain, Barton, had the ball in the net only to be denied by the linesman's flag. The game progressed with precious few chances created as both teams cancelled each other out. Leeds were the more dogged of the two sides whilst QPR seemed to have just that bit of extra class.  Wootton and Pearce were holding firm at the back though as the game crept towards half time still goalless. Wright-Phillips showed just why he is not quite good enough for the Premiership when he skipped past some desperate Leeds tackles only to pull his shot horribly wide. Leeds were restricted to long range efforts as the half finished with the scores level at 0.0.

The first half stalemate had tempered my pre match optimism.  Having spent £25m on their team QPR look like being formidable contenders for the promotion places as their redoubtable defence swatted away Hunt and Varney's efforts with unruffled ease.  If we were going to break the deadlock in the 2nd half we needed a different approach.

The 2nd half started with Warnock gifting Austin the ball on the half way line.  He scampered away from the distant home defence only for Kenny to thwart him with a good save. Leeds responded with a rare attack that saw Ross Mac appealing for a penalty after Simpson handled in the box but referee Atwell waved play on.  QPR were beginning to take control of the game as they dominated possession. Hunt and Varney gave way for Smith and Poleon on the hour as Brian McD tried to get Leeds back in the game. Smith went near with his first touch as his lunging header caused havoc in the visiting defence. Poleon also got a shot away to give the Leeds faithful hope. The home side's lack of width was holding them back though as far too few attempted balls into the box came from anywhere but near the bye line and were easily repelled by Dunne and Onouha at the heart of the Gers defence. 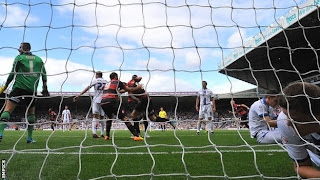 QPR's greater possession finally told on 75 minutes when Hill scrambled the ball home from a free kick after the ball ricocheted around the Leeds box. 1.0 QPR. It looked a long way back for Leeds having hardly tested Green in the Ger's goal. Diouf replaced Green and as ever showed flashes of class and trickery but not enough to create a goal as the game headed for 5 minutes of added time. Leeds threw everything forward in an attempt to preserve their unbeaten record. Pearce's header flew wide whilst Poleon wriggled free of his marker only to hit a tame shot at Green.  Then just as the final seconds ticked away Rudy Austin so nearly brought the house down as he hit a screamer from 35 yards that Green could only watch as it hit the bar. The whistle went shortly afterwards to signal a hard fought win for QPR 1.0.  A reality check for Leeds in this very tough and tight division. The visitors just about deserved their victory and on this evidence will be challenging come May next year.

For Leeds Murphy did well as did Wooton, Pearce and Pelts.  Warnock had an off day with too many misplaced passes. "The only positive is that we would have lost this 3.0 last year" HC muttered as we shuffled for the shuttle bus back to the town centre. The pre match buzz had evaporated from the majority of fans as they made their way home.  Football is a cruel game at times.

The journey home was quiet as the disappointment of the defeat sank in. Cyber space was alive with doom and gloomers demanding we sign Messi before it's too late but we are only 5 games into the league season.  We've made a good start and Brian McD has got the ship pointing in the right direction. Let's not panic just yet.  Bolton at the Reebok next.  Another tough test for Leeds. Can we bounce back against the Trotters? I do hope so.

MOT.
Posted by Andrew Butterwick at 17:04