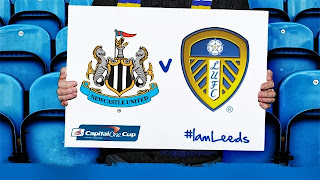 After a hectic dash from work I found myself on a packed train heading to Toonland in the hope of witnessing another cup shock for the mighty whites. Last season saw Premier League Southampton, Everton and Spurs all fall to Leeds United in the cup so why couldn't we do it again at the notoriously inconsistent Bar Codes? Well ignoring our most recent form, a Newcastle side that's worth about 70 times our current transfer budget and a spluttering strike force there's nothing to stop us progressing to the next round! The Happy Chocker, Quiet One and Brother Chris were amongst the hopeful 6,000 away fans who had made the trek north to the home of the Geordies intent on raising the decibel levels to the max. I do enjoy a good cup adventure. Question was would it last longer than tonight?

Not surprisingly both teams had made changes from their weekend starting elevens as is the case nowadays. Brian McD had brought Warnock back at left back and given Mowatt a starting slot in midfield. Smith and Poleon started up front. Alan Pardew had shown the championship side the respect of selecting a strong side from his squad of premiership players.

St James Park is an impressive stadium and has all the trappings of a Premier League club. Coming to a game like this reminds me of just what we are missing week in week out. The trek to the away section on level 7 of the stadium was interesting...........I'm sure I passed a Nepalese Sherpa on level 5....... and by the time I reached the top I joined the majority of fans gasping for breath in the rarefied atmosphere of the Newcastle stratosphere. Any fan with vertigo was going to struggle as I peered down onto the pitch where the players looked like subbutteo figures. I do hope nobody kneels on Paddy Kenny!

The game kicked off with the vociferous Leeds fans raising the roof with the first of many choruses of MOT. Leeds started well with some neat possession football on the perfectly manicured large pitch. Scott Wooton had to be on his toes to keep out a Cisse shot in the opening minutes but it was Ross Mac who so nearly brought the house down with Leeds' first chance. He broke away from the midfield melee before looking up and chipping the helpless Krul in the Toon goal only to see his shot hit the bar. The decibel levels lifted as Leeds dared to test their aristocratic opponents. On 11 minutes Gary Speed's name boomed into the Tyneside air as the away fans started an 11 minute tribute to the popular player. 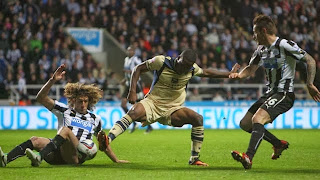 Newcastle were starting to flex their muscles though. Coloccini flicked his curly locks at the ball from a corner and Smith rescued Leeds with a clearance off the line. Next Gouffran failed to convert a simple header from 7 yards out. Still a cacophony of noise tumbled down from the Leeds fans in the gods that nearly turned into delerium when Smith headed the ball at Krul from 6 yards out. The game was opening up though and when Ameobi took advantage of a defence splitting pass down the Leeds right he hit a perfect cross onto the advancing Cisse's head. 1.0 Newcastle. Leeds were just about holding their own though. Mowatt was showing some good touches in midfield whilst Ross Mac found space in behind the front two. The scot so nearly equalised just before the break as Smith laid a superb header into his path but his shot scraped agonisingly wide. HT 1.0 Newcastle.

A man with a fridge on his back made up the half time entertainment. They're a strange lot in Newcastle! Although he had raised a lot of money for charity so fair play to him but why a fridge?

Newcastle had shown their superior class in the first 45 minutes but Leeds were hanging on. Next goal would be the killer. Leeds were now playing towards their fans high in the stands. A least we could see the players this half. Smith had two headers that Krul dealt with well as the mighty whites looked for the right ingredient to unlock the miserly home defence. White and Diouf replaced Tonge and Poleon as Brian McD sort to pull a goal back but within 5 minutes of their introduction Newcastle got the all important 2nd goal and what a goal. Gouffran seemed to be going nowhere when he received the ball on the edge of the box but he jinked and rifled in an unstoppable shot past the flailing Kenny. 2.0 Newcastle.

It was along way back for Leeds and gradually the Toon squeezed the life out of the game. They nearly got a third when Austin gifted the ball to Obertan before Pearce made a last gasp clearance. By then my eyes were watering from the smoke from two flares stupidly let off in the Leeds end. Wait until bonfire night if you want fireworks don't let them off when I'm watching a match.

I'd like to say that Leeds mounted a stirring comeback in true Cup tradition but they didn't. Newcastle were just too good for them. Leeds gave a good account of them selves and had a decent penalty shout when Smith went down but there was a sad inevitability about the closing minutes. FT 2.0 Newcastle.

As we streamed away from the ground all the talk was about how superb the Leeds fans had been singing from start to finish and they were.............I just wish for once everyone was talking about the team in the same manner. Leeds tried and won't be too disappointed with their performance but the gaping chasm between the have's of the Premier League and the have nots of the Championship was there for everyone to see. We were left to ponder that as my mind began to wander to the prospects for Saturday's trip to our friends in South Bermondsey. That'll be a slightly different atmosphere than tonight me thinks

MOT
Posted by Andrew Butterwick at 18:27