Clarets take three points against a less than vintage Leeds.

The agonising heartache of conceding a 97th minute winner at Reading was still raw amongst the fans gathering at Selby station for the trek to LS11. The positive vibes generated by the promising start to the season and enhanced by Varney's winner at the Reebok seemed light years away as we mulled over Le Fondre's late, late strike on Wednesday. 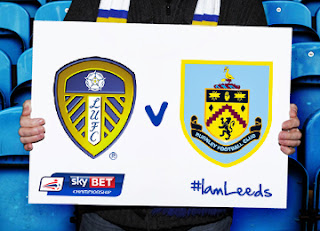 To be fair it's only to be expected. We have endured more false dawns over the last 8 or 9 years to last a life time so it's understandable that our new found confidence had taken a bit of battering especially facing a Burnley side enjoying their best start to a season in years. Having cashed in on Charlie Austin's sublime knack of scoring goals in the championship most pundits expected the Clarets to struggle for goals but they arrive at Elland Road with only 1 defeat and the best goal difference in the league. I tried to look on the bright side "at least we should have a bit of pace on the flanks today with White and Byram?" I suggested to the Happy Chocker. "Depends what White does with the final ball" HC grunted. There was no doubt we were in for another tight game as the train trundled through the East Leeds suburbs.

There was the usual slow burn of excitement as we boarded the shuttle bus from the station. Would Hunt keep his place up front? What does Diouf need to do to get a start? What about Poleon's pace? Will Sam Vokes get the inevitable goal of a returning discarded player a la Billy Paynter? Will Rudy continue his barnstorming form? Will Mowatt get some game time? Lots of questions that would be partly answered by Brian McD's team sheet. I tucked into my pie and peas with gusto and awaited another rollercoaster afternoon following the mighty whites.

Brian McD brought in Diouf for Hunt and as expected White and Byram filled the full back berths. Burnley started confidently and soon had the 26,000 crowd holding their breath as their impressive front two of Ings and Vokes worried the Leeds defence and had Kenny performing acrobats to keep the score blank. Somewhere in football folklore there is a rule that somehow transforms ex players who looked very, very ordinary when playing for your team into world beaters when they return with their new employers. Sam Vokes was building up significant evidence to prove that rule true as he split the Leeds back four with intelligent running and close control. Burnley were looking good value for their lofty position in the embryonic league table.

Diouf showed why Brian Mcd had given him a starting spot with some lovely early touches culminating in a defence splitting ball for Ross Mac who's cross found an unmarked Varney at the back post but last week's goal hero could only head tamely over the bar. The Clarets were enjoying too much space in midfield for my liking though and on 17 minutes Leeds paid a heavy price. Trippier collected the balll in midfield and then hit a diagonal ball to ex Puppy dog, Arfield, in the box.............Byram made a good recovery tackle to block the initial shot but the Burnley man pounced on the loose ball and steered past Kenny's near post for the opening goal. 1.0 Burnley and the omens weren't good. Leeds were spluttering rather than purring and none more than Austin who wasn't firing on all his usual cylinders.

Leeds were keeping the ball on the floor though if not a bit laboured in their build up. Byram so nearly capitalised as Leeds pressurised the visitors goal as his fierce volley was elbowed away by Shackell at the centre of the Clarets defence............PENALTY screamed the kop but the referee waved play on as the danger fizzled out. Leeds were having plenty of possession and creating chances but that finishing spark was missing. Aidey White twice found himself free in the box. First he shot when he should have laid it back to Ross Mac then he laid it back to nobody when he should of shot. It looked like it was going to be one of those afternoons. I glanced at the Happy Chocker and he had a look of resignation on his face and it wasn't even half time. The referee continued to mystify the crowd with some of his decisions as Leeds pushed for an equaliser but it was the visitors who were looking dangerous as Ings and Vokes made merry at the expense of Pearce and Wootton.

The 2nd goal came just before half time. Burnley were given a free kick for what seemed like an excellent tackle from Pearce. Leeds failed to clear the ball into the box and it fell to Kightly who picked out an unmarked Vokes, who else, 8 yards out. His header was saved by Kenny but he followed up and speared a shot past Kenny into the net. 2.0 Burnley and many frustrated home fans were scuttling for the sanctuary of an early half time pint. They missed another strong penalty shout as White went tumbling in the box after a typical mazy run. Half time arrived with the Clarets good value for their two goal lead.

The Urinal philosophers were in an unforgiving mood as the consequences of pre match refreshments were dispensed. "Utter shite" one punter moaned.............."we're too slow in the build up" another commented whilst a third thought "we need a striker and quick" A week is a long time in Football and the away win at Bolton seemed a distant memory. In truth Burnley looked very solid at the back with Shackell looking imperious at the heart of the defence and when they attacked both Vokes and Ings looked dangerous. For Leeds Byram was understandably struggling with his first game back since April whilst the midfield collectively were 2nd best to the Lancastrians. "I'd bring on Smith and Poleon on" HC chimed as the 2nd half got underway.

Ings broke clear as Leeds lost the ball in midfield before sending a stinging shot that Kenny just tipped over. Things were looking bleak for Leeds. Any chances that were created seemed to fizzle out to nothing.  Where were the goals going to come from? On 56 minutes Green and Poleon replaced Murphy and Byram. Poleon made an immediate impact with his pace and also a badly timed tackle that saw Jones depart on a stretcher. Leeds were now dominating possession as Burnley battened down the hatches. Ross Mac missed a golden chance as he headed wide from a glorious Diouf cross. "He should have buried that" HC and I said in unison as the chances of getting anything from the game started to slip away. Next it was Diouf who had the home fans out of their seats as his header produced a stunning save from Heaton in the Burnley goal. With 15 minutes to go Brian McD threw on Smith for Varney in a final roll of the dice. A more direct approach was the order of the day and the big substitute soon had fans questioning why he hadn't been on earlier as he won his first three headers with aplomb setting up Poleon and Ross Mac for half chances. 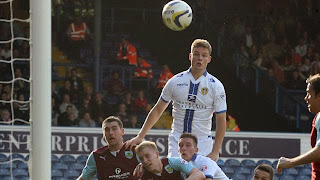 Just when it seemed all hope had gone the big ex Oldham man dragged Leeds back into the game with a towering header that thundered into the Burnley net from a Diouf free kick. 2.1 Burnley and game on. The crowd were now baying for an equaliser. Poleon fired a good chance high, wide and handsome as the game went into 6 minutes of added time. Austin fired a vicious shot just over the bar as Leeds at last built up a head of belated steam. Balls were thrown hopefully into the box for Smith to repeat the medicine but despite some huffing and puffing Burnley held out for the victory. A win that lifted them to 2nd in the table. On this form they should be challenging come next May.

Leeds were disappointing. Chances were created but we currently lack a real cutting edge up front evidenced by a staggering 22 shots of which only 5 were on target. Diouf did give a bit more creativity but he hasn't the pace to worry teams. The midfield diamond looked reasonable going forward but too many times were caught out defensively. Two defeats on the bounce has taken the wind out of our early season sails and with daunting trips to the Toon followed by Millwall to come Brian McD's managerial nouse will be tested to the full.

As the fans streamed away from the stadium the word rubbish seemed to be on a lot of lips. A bit harsh I thought.  Burnley are a decent side who have a cutting edge up front unlike Leeds who are creating chances but not taking them. There's still a long way to go in this campaign so no need to press the panic buttons yet.

Newcastle on Wed in the Capital One Cup. 6,000 of the LUFC family will make the trip north in hope of some cup glory.  Hiking boots will be needed to scale the 7 levels to the away section at St James Park. On paper we should get hammered but then again that was the case against Everton, Spurs and Southampton last year. We live in hope.  One thing is for sure................

Posted by Andrew Butterwick at 21:23