A Ross Mac brace sees off the Wigan.

After the usual hectic dash to a midweek game news that Tom Lees and Ross Mac were still doubtful for the match against the cup holders didn't exactly fill me with joy as I tried to eat a particularly stubborn pre match pie. An excellent crowd of just under 26,000 had assembled for the latest game in Leeds' championship campaign against the Pie munching Wiganers. Would they emulate managerless Barnsley and Wednesday and bounce back from the sacking of their manager with a win? Could Leeds bounce back from the set back at Blackburn? Has Mowatt been offered a new contract? These were all debating points as my immediate LUFC family frantically discussed all things Leeds to the accompaniment of some amber nectar as we waited for kick off.

Thankfully both Lees and Ross Mac were fit with just one change to the team that started on Saturday as Smith replaced Varney up front. Byram remained on the bench. On paper Wigan looked a decent side so their lowly league position was a bit deceiving given their game in hand. I was expecting a tough and nervy test as the game kicked off with the temperature dropping like a stone.

Leeds started full of purpose seeking a 5th straight win at the Theatre of Hope. Murphy had an early shot saved by Scott Carson in the Wigan goal before Pearce sent a header wide from a deep Mowatt cross. Wigan looked a little dis-organised and took time to settle allowing Leeds to apply some pressure to their jittery defence. Smith was using his considerable bulk to unsettle the visitors. He challenged for the ball in the box with two Wigan defenders and they all came down in a tangle. Smith was first to react though smashing the ball almost in slow motion goalwards only for Carson to turn it behind for a corner. Mowatt trotted over to take the corner and received warm applause from the kop. His deep corner saw Lees rise high at the back post and knock the ball back into the 6 yard box for Ross Mac to bundle home......Gooooooooal Ross Mac and Leeds were 1.0 up with a carbon copy of the goal he got against Boro. Leeds enjoyed a good period of pressure as they tried to put the game beyond Wigan. Smith's flashing header from a Mowatt cross went inches wide but Wigan drew breath and suddenly began to threaten Kenny's goal. Lees threw himself at a Watson shot before Kenny made a heroic save to thwart Keane as the Leeds defence creaked. 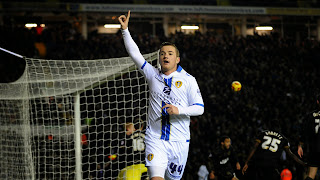 Half time approached with chances at both ends but more good goalkeeping from Kenny and some over eager passing from Leeds meant the half time break came with the score still 1.0. A half verging on scrappy at times but one that Leeds had stubbornly ground out an advantage. Zakiulas particularly caught the eye with yet another accomplished and classy showing at the back.

Wigan started the 2nd period on top and looked dangerous as they stroked the ball about in front of the resolute Leeds defence. Grant Holt and McLean came off the bench on 54 minutes to try and pull a goal back for the visitors. "Mr Holt always scores against us" I moaned to HC. Nerves were starting to jangle a bit and with just the single goal advantage I started to worry where the next goal was going to come from. Leeds were battling hard though if not spectacular they were committed. With 70 minutes gone Matt Smith mugged the Wigan centre back in his own half and found himself clear on goal........not only that he had Ross Mac and Mowatt in support........3 on 1 with the goalie surely we couldn't miss? Mmmm well we did as Smith went for glory and shot straight at Carson with Ross Mac clear alongside him for a tap in. Bollox! We could well regret that I mused as Wigan broke immediately and Boyce sent a header too close to the goal for my comfort. Leeds were going for the killer goal though. The impressive Mowatt strode through the Wigan defence and fired a stinging shot at Carson to lift Leeds hearts.

Ross Mac had been a doubt for the game but you wouldn't have known by the way he was playing. He enticed Barnett into bringing him down in the inside left position 30 yards out. All our big guns lined up in the box for the free kick but Ross Mac's swinging kick evaded everybody and bounced into the Wigan net for the 2nd goal. 2.0 Leeds and game over!

There was still time for Watson to fizz a shot inches over the Leeds bar with Kenny rooted to the spot but Leeds managed to close out the game with relative ease and a welcome three points. Final score 2.0. A gritty sometimes dour performance from Leeds that yielded another clean sheet and a 5th win on the trot at home. The defence played superbly with Zakiulas outstanding. What an acquisition he has been! Ross Mac will get yet more headlines for his two goals which crowned another fine performance from the Scot. Mowatt showed off all his precocious talent at the heart of the Leeds midfield with another impressive showing and as ever the rock that is Kenny pulled off a couple of key saves. He is by far the best keeper in this league.

My frozen feet didn't warm up until I got home but it was worth it to see Leeds recover from Saturday's defeat. There is still room for improvement though but with Leeds sat in 7th place in the league that should auger well for the new year. Watford up next at Elland Road. Another win will set us up nicely for the festive programme. If we can add some quality to the squad in January anything is possible? Bring it on!

MOT
Posted by Andrew Butterwick at 23:35