Honours even in 6 goal thriller at Elland Road.

Once again there was an air of quiet confidence as we headed for the Theatre of Hope for the clash with Watford. The steady, if not spectacular, improvement under the tutelage of Brian McD together with a number of "fan friendly" initiatives from the owners are gradually bringing the smiles back onto the faces of the battle weary Leeds United family. After the midweek victory against Wigan and yet more goals for player of the month, Ross Mac, expectation was high of a 6th straight win in LS11. "If we're not careful we'll soon be calling Elland Road a fortress again" I suggested to the Happy Chocker as we parked the car.

Watford arrived at ER without a win in their last 7 games and goalless in the last 3 a statistic that added to the feeling of confidence. Raw memories of a 6.1 defeat last time round did add a dash of apprehension to proceedings though. Bumping into Tom Lees at the back of the West Stand suited and booted gave us a clue to Brian McD's team selection. Byram in for the injured Lees with Pelts moving to centre back in an otherwise unchanged team. Still no room for Diouf on the bench.

A minutes applause for two great leaders, Mandela and Bremner, was enthusiastically embraced and soon the match was under way on a crisp, cold December afternoon in West Yorkshire. Leeds started like a whirlwind and had a couple of chances in the first 5 minutes as both Smith and Zaliukas tested the Hornet's goalie with headers whilst Austen had a stinging goal bound shot saved by Bond only for Murphy to make a complete hash of the follow up shot with the goal gaping invitingly. Watford looked dangerous on the break though with their pacey attack more than willing to test the Leeds back line on the counter attack. Bellerin served warning of what Watford were capable of as he finished off a slick move by heading inches wide. The breathless pace of the game continued as the clock ticked past 10 minutes.

The game was very open and Leeds paid the price for their over ambitious attacking when they were again left exposed at the back after losing the ball in the Watford half. Deeney latched onto a loose ball in the box after Leeds failed to clear and tucked the ball past Kenny to silence the vociferous home crowd. 1.0 to the Hornets. So disappointing after such a positive start. Suddenly the 5 game winning streak at ER was under threat.

Leeds responded well to the goal and continued to attack Watford but the latent threat of the Hornet's speed men made me very nervous. Leeds have a grittiness about them these days and crunching tackles from Austen, Pugh and Pearce lifted the volume of the home support. We do like a nice crunching tackle! Byram's return added a bit more threat down the right flank for Leeds and he reminded the home fans of what they had been missing when he threaded a superb curling ball behind the Watford defence only for a defender's outstretched leg to divert the ball away from a lurking Smith on the penalty spot. Next Smith made a nuisance of himself on the edge of the box and spun a shot wide of the post as Leeds pushed for an equaliser before Pugh received a yellow card for alleged diving in the box when the majority of the 23,000 were shouting for a penalty. Leeds were getting up a bit of a head of steam as half time approached but they were stung yet again as the speedy Hornets broke quickly out of defence and Battocchio found space in the box to bundle the ball home past Kenny. 2.0 to the Hornets and a deathly silence descended on 7/8th's of the ground. Leeds had fallen for the same sucker punch again with too many players pushed too far forward.

Half Time and Watford leading 2.0. The Urinal philosophers were not happy. "They're too quick for us on the break" one fan complained stating the obvious whilst another rather harshly bemoaned the fact that "we haven't got a goal in us today" Football is a game of opinions and I still thought we had a chance as long as we got an early 2nd half goal.

If Leeds started the first half like a whirlwind then they hit Watford with a hurricane at the start of the 2nd 45 minutes. Smith climbed high and sent a looping header goalwards that had Bond scrambling to tip the ball over for a corner. The decibel levels increased as Mowatt took the corner..........Bond came for the ball and missed.......Smith thundered in from the back post but his header sailed inches over the bar. Adrenaline was surging through the Leeds team and fans alike as they battered the visitors back line with wave after wave of attacks that raised an earthy roar from deep in the bowels of Elland Road. With just 5 minutes of the half gone got what they wanted. Ross Mac was the instigator as he found space on the right and crossed the ball into the box where Pugh came crashing onto the ball and lifted it high over Bond into the Watford net. A roar of epic proportions greeted the goal. Game on 2.1 Watford.

Watford wilted under the intense pressure from Leeds. Murphy Mowatt and Austen were greedily gobbling up anything that moved in midfield as Leeds smelt the fear in Watford's play and went for the jugular like a Lioness stalking a lame Gazelle. Pelts set up Ross Mac with a lovely ball down the right.........the Leeds goal machine clipped an inch perfect cross to the back post for Smith to thump his header into the net and Elland Road erupted in delirious celebration. 2.2 What a game! Chances and shots now rained in on the Watford goal. Austen twice went near then Mowatt hit the bar before Smith had a shot saved. Leeds were on fire and despite the Urinal philosopher's prophet of doom Leeds definitely had more goals in them as they pushed for the winner. This was fantastic stuff.

Watford drew breath though and threatened the Leeds goal again on the break bringing a superb save from Kenny to keep the scores level. This was now an end to end game with both teams taking outrageous risks in looking for a winner. Austen seemed to be everywhere and Murphy was having his best game in a Leeds shirt as Leeds battled to pinch the winner. On the 16th anniversary of Billy Bremner's untimely death he would have relished a game like this and you could almost hear him cheering as Rudy crunched into yet another "firm but fair" tackle. Something had to give though in this thrilling contest. 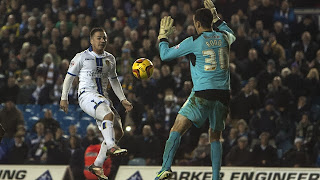 With the crowd noise at fever pitch Luke Murphy won the ball in midfield and then put a delightful ball over the top of the defence into the path of Ross Mac who calmly slotted the ball past the advancing Bond in the Watford goal to make it an incredible 3.2 to the home side. A tidal wave of noise engulfed LS11 as the Leeds fans celebrated an epic comeback. With 79 minutes gone there was still time for more goals though.

Most teams would have shut up shop and enjoyed a famous comeback win but the adrenaline driven surge continued as Leeds slugged it out toe to toe with Watford. Mowatt put Smith through with a sublime ball but the big striker had strayed inches offside. A 4th would have been greedy but it would also have settled the nerves as the game entered the final 5 minutes. Suddenly a cavernous hole opened up in the Leeds midfield as tired legs took their toll. George Thorne picked up the ball and dragged his weary legs towards the Leeds goal before unleashing a fierce deflected shot that Kenny did well to save but Deeney reacted quickest to slot home the equaliser and break Leeds hearts. Bollox. 3.3.

There was still time for a winner in this enthralling game. Murphy dragged a left footed shot wide before Zakiulas made an incredible goal saving block in the final minute as Watford looked certain to pinch the winner. Final score 3.3 but what a game. The smiles that Brian McD talked about earlier in the week were definitely on the faces of the fans as they streamed away from the ground. Murphy, Mowatt and Austen all performed well with Ross Mac having another 5 star performance up front. Smith is still work in progress but  he was a hand full all afternoon and finished his goal well.

Probably the best game I've seen at Elland Road for a long time. Leeds are still not the finished article but if they continue in this vein there's every chance we will be right in the mix come next May. Doncaster and Barnsley up next. If we can get a result in both of those games then we can start dreaming of a White Xmas and a strong promotion challenge in the new year. Delicious!