Leeds pegged back by Ince at Blackpool.

The car was full of the usual regrets at the previous day's over indulgence in both food and alcohol as The Happy Chocker, Quiet One and yours truly headed to the Seaside for our Boxing Day clash with the Donkey Lashers. It never ceases to amaze me how much is eaten over Xmas but that didn't stop me filling the car with Turkey sandwiches, Pork Pie and enough chocolate to sink a ship........."just in case" we were hungry at the match. As if! 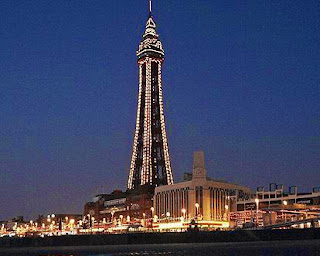 Blackpool offered an intriguing challenge. Their form has collapsed in recent games losing their last four on the bounce together with collecting 5 red cards for their troubles. At the same time Leeds have put together a mini unbeaten run of four games but in recent clashes with the Seasiders Leeds have always been left empty handed and in awe at the skill and pace of the Tangerines. The one thing we were all convinced of though was it would be absolutely Baltic in the rickety away stand with the wind whipping in from the less than seasonal Irish Sea.

Brian McD was forced into a change with Murphy suspended but he also rested Mowatt from Saturday's starting line up leaving a midfield three of Brown, Tonge and Austin. New boy Gboly Ariyibi and Wootton were additions to the bench. The travelling support amongst the 15,000 crowd were in boisterous mood as the game got under away. The first 15 minutes were a bit scrappy to say the least as both teams vied for the early superiority. Michael Brown made sure Mr Ince knew he was on the field with a couple of no holds barred tackles whilst the rather portly expert gambler, Michael Chopra, seemed intent on collecting as many offside flags as possible in a ten minute period? Leeds settled the better though and went ahead with their first incisive attack on 24 minutes.  The hard working Danny Pugh hit a superb back post cross from the bye line for Pelts to head back across the despairing Gilks and into the Blackpool goal. 1.0 Leeds. 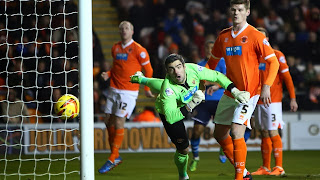 The goal stung the Seasiders into action.  They won two corners in quick succession, one from a Matt Smith sliced clearance, but the resolute Leeds defence led by the magnificent Zaliukas held firm. Tom Ince offered the most threat from the home side but he was closely marshalled by the men in blue. Not surprisingly the travelling support gave him dogs abuse for his father's connection with The Theatre of Shite but the obscene chants about his family were a step too far for me and should be condoned by all right minded Leeds fans. The next chance went to Blackpool as another teasing Ince corner was thundered over the bar. At the other end Ross Mac was looking to end his one match scoring drought as he broke away from his markers twice but failed to get a decent shot away. Leeds ended the half in reasonable control of the game with both goalies having had little to do in a tense first half.

The general view from the urinal philosophers was that Blackpool's facilities were less than fit for purpose as we crammed into a small Portacabin seeking some half time relief from the pre match refreshments. Other than that the main theme was "We need a 2nd goal to be safe" Too true I thought. Leeds were now playing towards the goal  nearest their fans and started the half with a bang as first Austin and then Pearce missed chances to double their lead as Blackpool started to look suspect at the back. Jack Robinson woke the home crowd up with a searing thirty yard shot that went inches wide of Paddy's post. "We definitely need a second" I mused to HC. Austin wasted another good chance from 18 yards when he unsuccessfully tried to volley a loose ball home as the clocked passed the hour mark.

Inevitably Leeds were made to pay for their missed chances by none other than Tom Ince when his shot was wickedly deflected past a helpless Paddy Kenny on 67 minutes. 1.1 and suddenly memories of last year's capitulation at Bloomfield Road after being one up came flooding back like the ghost of Xmas past. Leeds responded immediately though as neat play released Ross Mac who got goal side of Broadfoot only for the Blackpool defender to haul the Scot back on the very edge of the box. Another red card seemed inevitable for Blackpool as Ross Mac was clear on goal when he was unceremoniously dragged back but inexplicably the ref only produced a yellow? Bizarre. The free kick deflected away for a corner and the danger was gone.  Buoyed by the goal the home team went looking for the winner leaving space at the back for Leeds to exploit but suddenly it was the Tangerines who looked the most likely with Leeds bodies being thrown at Blackpool shots to keep the scores level. Broadfoot was determined to get an early bath though and with a minute left he lunged into a reckless tackle leaving Zaliukas writhing on the floor for the 2nd game running  and leaving the Blackpool defender with a nice Red card. There was 3 minutes of added time but the game ended with the scores level. Leeds were unfortunate not to take all three points in this very tight game. Statistics don't lie though and with only 3 shots on target all night from both sides this was anything but a classic.

It speaks volumes of the progress Leeds have made that most of their fans were disappointed with just a points as they streamed away from a ground that last year they visited expecting and getting absolutely nothing. Brown and Tonge worked hard in midfield but both tired late on as did Smith. Both wing backs, Pelts and Pugh had notable games but my Man of the Match went to Zaliukas for another impressive showing at the back.The point was enough to keep us in the play off places at 6th with Sunday's clash with Forest up next.

The Forest game will be a big test for Brian McD's men but with the organisation he has instilled in the team they will travel in confidence to the East Midlands. It would be nice to finish another turbulent year in the history of Leeds United with a win at the City Ground wouldn't it?


FOLLOW @WeAreLeedsMOT3 @Pelts_86 first goal for... by weareleedsmot1
Posted by Andrew Butterwick at 23:11